There are keys to everything. Visuals styles separate the five-tiered finale, one section in a plane, the second in a van, the third in a motel, the fourth in a mountainous region, and the fifth in a more personal realm. Each has a specific color spectrum, teal for the van, vivid whites for the snow-covered mountain, etc. There is never any confusion as to where you are at what time. It’s all carefully constructed to avoid that.

Cobb (Leonardo DiCaprio) leads his team of professional, high-technology thieves through people’s dreams to steal their ideas, the not-so-simple task regularly breaking down into chaos as the victim’s own subconscious fights back. Inception’s rules are made to be broken though, the film setting up a finale where everything is tossed out the window just for the sake of doing so. It needlessly twists the otherwise exceptional writing for what appears to be an attempt at trying to keep ahead of the audience. It doesn’t need that.

The breadth of the visuals, cities flipping upside down or people floating in twisting zero gravity, are stupendous. It’s the type of vivid creativity that seems lost on so many of today’s filmmaking minds, using visual effects to create a new universe, an absorbing one at that. Inception could draw you in with only its majesty, a bland of marvelous miniatures and computer generated work that mash together in harmony without seams.

Underneath the style and concepts is a personal human element. What begins as corporate espionage turns into something more, where the goal is no longer a thief outwitting his opponent, but a man struggling with his past. It’s the darker side of this technology, Cobb’s wife Mal (Marion Cotillard) sucked into the illusion, not the reality. The result is heartbreak and an ever-lasting emotional toll until he can reconcile with himself. He must escape before his subconscious consumes him, while the open-ended final moments leave it up to the viewer to decide whether or not he makes it out. 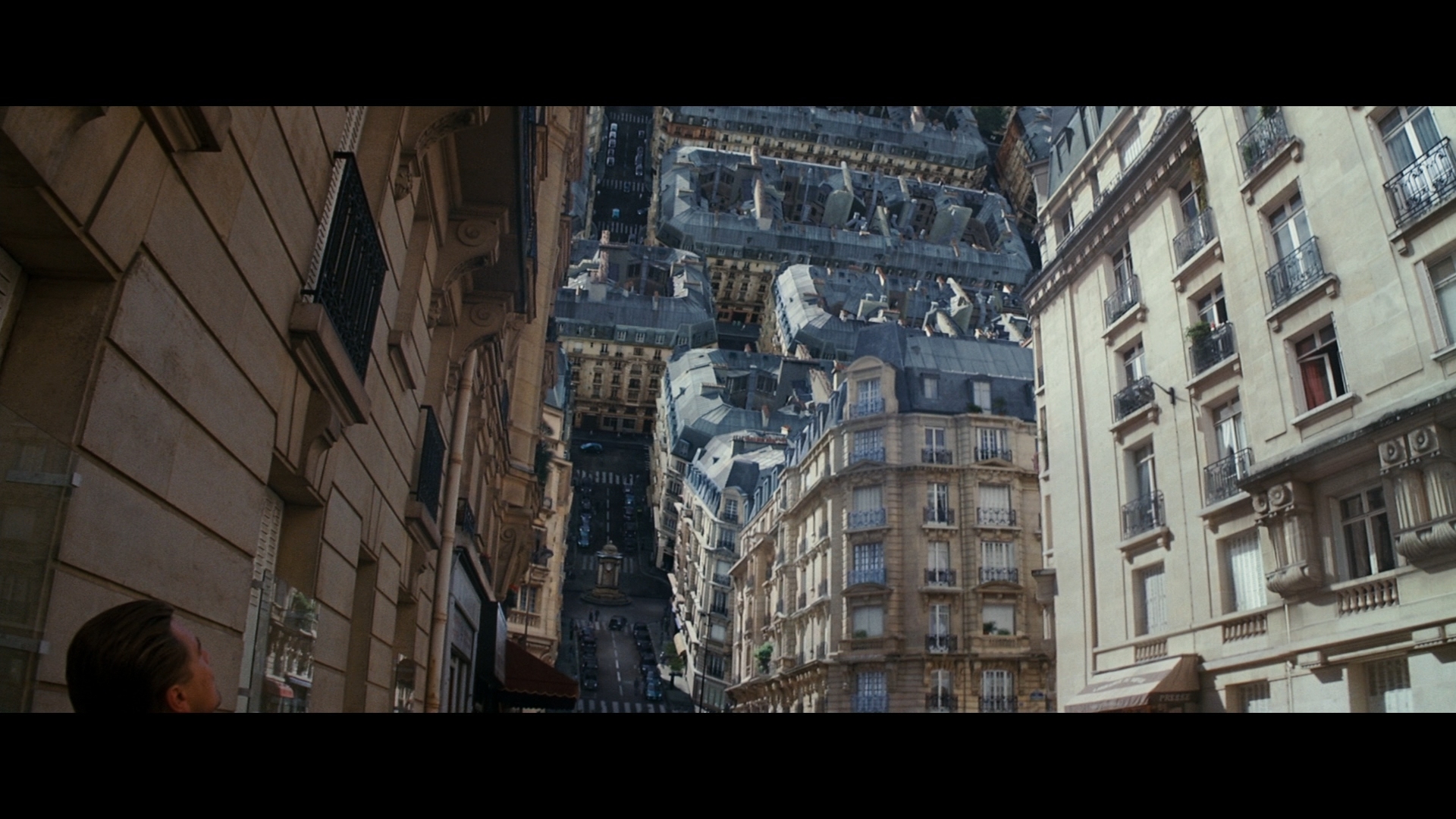 Warner supplies Blu-ray viewers with a VC-1 encode, one that shares many of the same issues as most of their new releases, but overcomes the majority to still impress. Inception was filmed with a variety of cameras, lenses, and styles. Nolan swaps 35mm for 65mm, and then even into digital. The home version makes these transitions seamless, to give credit where credit is due. Scenes with a visible film grain keep it almost invisible, the fine-grained stocks meaning the encode has little to struggle with to maintain integrity.

Where is doesn’t always hold is chaos. When the city begins destroying itself the first time Ariadne (Ellen Page) dives into the dream world, the mass of debris becomes a bit too much to bear, resulting in artifacting. There is another solo shot of significant break-up late as the rain falls onto a river at 2:14:11 that is awash with digital blocks. These are quick to pass, and the level of definition means the compression will likely only be visible to those looking for it.

There is no question the disc is rife with detail. From the staggering aerials of the various cities (the opening establishing views of the snowy mountains are tremendously beautiful) to the close-ups of the actors, texture and high-fidelity detail is prominent. Clothing is well established down to precise stitching or make up, the suit worn by Eames (Tom Hardy) at 36:51 defined. Under that detail is a slight flicker, the same flicker that can be seen at 40:28 as the characters pass by a window with blinds.

Some rather noticeable ringing can be found too, sporadically noted throughout the film, no single scene being especially offensive. Of bigger concern are the dips in detail, faces appearing smoothed over, the mid-range especially bothersome. It’s where the transfer stops appearing like film and takes over as a digital transition that didn’t go as smoothly as it should have. Softness becomes pervasive in some scenes, and the lack of rich texture a disappointment. That said, there is an equal balance of good and bad at play here in this regard, while the other exceptional qualities elevate it further.

Black levels are precise and rich. Inception is a dim film, taking place in countless low-light situations. Never does the depth lose out, and shadow detail is sublime. Colors are wildly scene dependent, flesh tones generally warm, aggressively so within the hotel dream. There are moments of brief saturation bliss, a pass of a fruit stand as Page first learns of this world providing some of the boldest hues in the movie. All of it looks to match the intent.

There is almost no doubt that Inception’s DTS-HD mix is a killer… a killer of neighbor-based relationships, windows, and anything not secured properly. The low-end of this track is simply unbelievable, delivering some of the tightest, cleanest, and purest bass since Transformers 2. While that film utilized it purely as another element of its showy qualities, Inception uses it as an enhancer.

It brings those slow-motion segments to life, each greeted by a thundering piece of audio design that accentuates the action. As the van first hits the barrier before tipping off the bridge at 1:45:30, the weight of it all is unfathomable, rattling everything while remaining tightly contained within the room. There are countless moments like that, including when someone is entering into another dream level (1:30:00). There are multiple layers of bass too, from the mild rumble of distant thunder to earthquake-like shakes as dreams begin to collapse, the mix delivers it all.

Bass is not the only mouth-watering quality audiophiles will be enamored with. The surrounds are just as awesome: sweeping gunfire, a train passing through the street, and ambient rain are the highlights of one of the film’s more intense action sequences around 1:05:00. That gunfire carries weight, giving the listener, yes, more bass, but also that crisp high-end that is flawless in its clarity. Other scenes, one around 9:30, has debris being tossed around as a building crumbles. Wood splinters, metal creaks, and it happens in every channel.

Through it all is a score, brilliantly mixed into the rears for that extra kick, but focused on the fronts where it becomes a force. It’s loud and just as powerful as that bass when it wants to be, keeping the viewer enthralled regardless of how massive the action may become. Underneath that lies the dialogue, in perfect balance with every other element regardless of how overwhelming they have the potential to be.

Inception is given the two-disc treatment, the first holding the movie and the “Extraction Mode,” Warner’s now standard pop-up picture-in-picture design for all of their major features. Various featurettes and director interludes are included, pushing the length of the main feature to just over three hours. You can choose to watch each specific section separately for a total of 44-minutes. A general BD-Live portal is here too.

Disc 2 begins with Dreams: Cinema of the Subconscious, a 44-minute look at sleep and dreams with various fields of science having their say. A motion comic acts a prequel and lasts 15-minutes titled The Cobol Job. One of the niftier features is Hans Zimmer’s score, wrapped up in DTS-HD 5.1, all on its own, 39-minutes worth. Despite a total lack of visual accompaniment (it’s just a black screen), it’s far better than any other delivery method for hearing his work. An online feature lets you look at the technology used within the film, followed by art galleries and trailers.

Full disclosure: This Blu-ray was provided to us after the review for inclusion in Warner Bros. Blu-ray Elite promotion. This has not affected the editorial process. For more information on how we handle review material, please visit our about us page to learn more.