Why is it that all thieves who break into your home can’t be like Snow White? She finds a house in the middle of nowhere and gleefully dances around sweeping up dirt or washing dishes. It’s a shame not everyone can be that lucky.

Of course, as everyone knows, Snow White is a fairy tale (sapping all hope of someone helping with cleaning duties) and Disney’s first feature-length piece of animation. Considering the monumental complexity at work, one would suspect professionals with decades of experience. Instead, there were of a team of animators used to designing shorts pulled together to craft this icon.

It is hard to imagine the amount of dedication it takes to not only animate (flawlessly) a human wearing a wavy, complex dress. In that same frame are numerous forest animals, including multiple rabbits, deer, a turtle, and birds. They all move simultaneously, in sync with a fantastic musical accompaniment, and never once is a mistake visible.

The purity of Snow White’s animation would be bested in later years with efforts such as Pinocchio, but this 1937 effort is no less a visual stunner. Motion is meticulous and believable, while the softer color palette lends a magical quality to the proceedings, perfect for a fairy tale.

The Disney animation teams creates loveable characters out of the seven dwarfs as well, each with a clear personality before they speak a word of dialogue. Each represents their mood as they walk back to their house after digging in the mine, distinctly carrying a specific walking style.

That is important since much of the story is simplified. It needs a draw, a focal point, and the dwarfs provide. The Prince, a crucial element of the story, isn’t even given a name. He appears in an early scene after Snow White’s initial appearance, and then disappears until the end when he is needed.

That gaping story hole is hidden underneath the jaw-dropping animation quality, including the terrifying forest chase. You forget the story arc, become involved with the characters, and enjoy the innocence of this harmless, engaging fantasy. 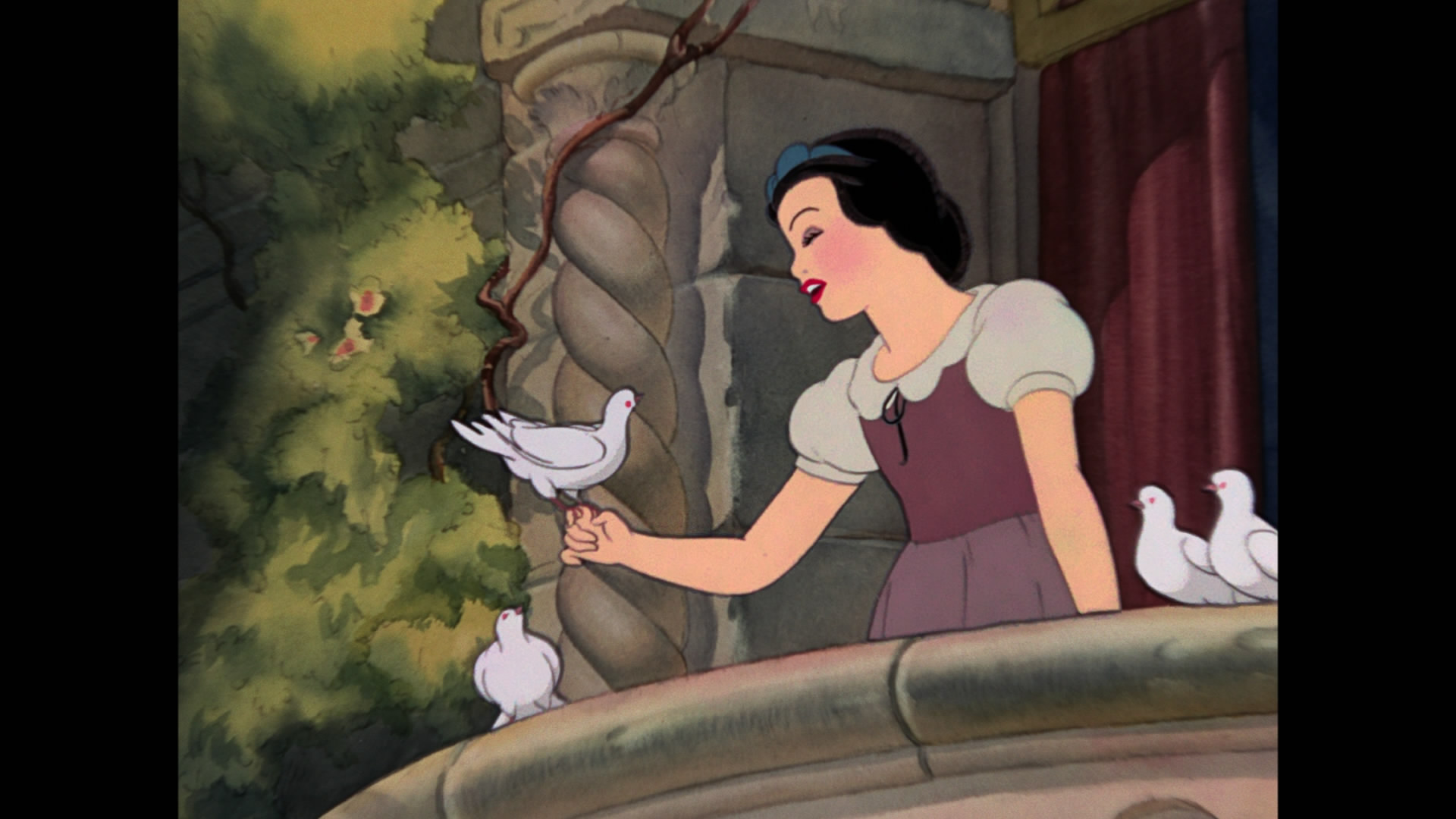 Like previous classic Disney Blu-ray releases, grain has been cleared from this AVC encode, but not entirely. Some shots still exhibit a frozen grain structure, alarming against the first shot of the castle, but fears are quickly eased. Any scenes with a grain structure are typically complex, filled with smoke or other special effect making it hard to detect anyway.

Some light artifacting is evident but incredibly minor. Snow White lacks the powerful color saturation of Sleeping Beauty, but this suits the tone and story better. Some colors do pop off the screen, including the Queens vivid purple cloak. Brightness is exceptional, making the images vibrant and lush.

Contrast is bright, and blacks are superb. Again, the Queen looks spectacular, with an inky black cape, and simple outfit when she transforms. All lines are defined cleanly, with only a few shots appearing soft or out of focus. Detail in the background paintings and even the animation is remarkable enough to pick out individual brush strokes. All print damage has been removed, and not a speck remains on the print.

The core audio track is a rich, clear DTS-HD 7.1 track. Purists will appreciate the restored mono effort as well, although in Dolby Digital.

It is hard to find complaints with any of the available tracks, but the DTS-HD mix is the winner. The crisp dialogue maintains amazingly high fidelity given the age, while the lively score fills the front channels beautifully. Some light bleeding into the rears is hardly noticeable, but offers that immersive quality.

Sound effects sit firmly in the center channel, so those expecting unnecessary ambiance in the forest or rain effects during the action-filled finale will be disappointed. Thunder provides a satisfying low-end thump, enough to generate a reaction in the viewer and add a sense of power to the scenes that showcase it.

Disc one of this set provides a great commentary, introduced by Roy Disney, led by historian John Canemaker, and pieced together archival interviews with Walt Disney himself. A piece on a possible sequel titled Snow White Returns showcases original sketches found in the Disney archives, which can be viewed on their own or together to tell the story. Also available is “Disneyview,” which fills in the sides of this 4×3 presentation with artwork, but only becomes a distraction.

Two infamous deleted scenes are featured (causing the animator nearly to quit over their deletion), as is a rather grating remake of the song, “Some Day My Prince Will Come.” Some generic games, a Princess and the Frog promo, and typical BD-Live connectivity remain on this first disc.

The second houses Hyperion Studios, a (at times) needlessly complex menu system that branches into 13 different sections, each focusing on a specific portion of the production within studio walls. Some of these are short such as Walt’s Office, containing a two-minute piece about working with Disney, up to 17-minutes, a feature titled The One That Started it All, looking at the influence of the film. Also contained inside each section are hundreds, if not thousands, of stills.

Trying to find everything or even list it is complicated, but the best estimate is around two hours of total content, possibly slightly longer. This is exhaustive, but thorough, and well worth digging into. A second section is pulled from the previous DVD release, including the half-hour Disney Through the Decades (a historical look at the studio designed as a promotion), and Animation Voice Talent, briefly looking at the people behind the characters for six minutes.