Throughout the classic years of Disney animation, picking a single standout animation sequence seems impossible, but it’s not. It happens in Pinocchio, not long after toy maker Geppetto finishes his creation. He picks his string puppet up, named of course Pinocchio, and dances with it.

These are hardly simple motions, but deeply involved, flowing, and intricate moves. The strings controlling Pinocchio move with the motions, Geppetto swings around the frame, and even the young kitten Figaro sneaks between Geppetto’s legs. It is mesmerizing to watch, the sheer ability of the Disney animation team at their peak flawlessly transferred onto the screen.

Not a single frame of animation is lazy. In fact, the most complex sequences seem to be done purely for the challenge, including a pan shot of kids running off to school with multiple backgrounds and countless characters. Look for a bully to stuff a child into the fountain face first, a detail a lesser film would have glossed over without care. Walt Disney did care, and gave this film life much like its title character.

The well-known story trots out a number of life lessons, perfectly captured within the purpose of the story. Teaching kids about lying, listening, going to school, and more are introduced at crucial turning points for the narrative without feeling forced.

Also, it is a refreshing change to revisit a film that is completely non-PC. In Pinocchio children smoke, chew tobacco, animals are injured, and the whale sequence is truly terrifying. Not that children smoking is a positive thing, but Pinocchio makes no attempt to skirt the issue or deliver a monologue on why children shouldn’t do it (despite a forced intro from Disney before the movie starts on the disc).

The difference between modern and classic animation, aside from the obvious alterations in techniques, is how it relates to an older audience. Modern animated movies use covered pop culture references or sexual innuendo that appeal to the adults, but go over the child’s head. Pinocchio appeals to both sets with its story, and with the added ability of an older audience to enjoy the masterful animation they didn’t understand when they were young. 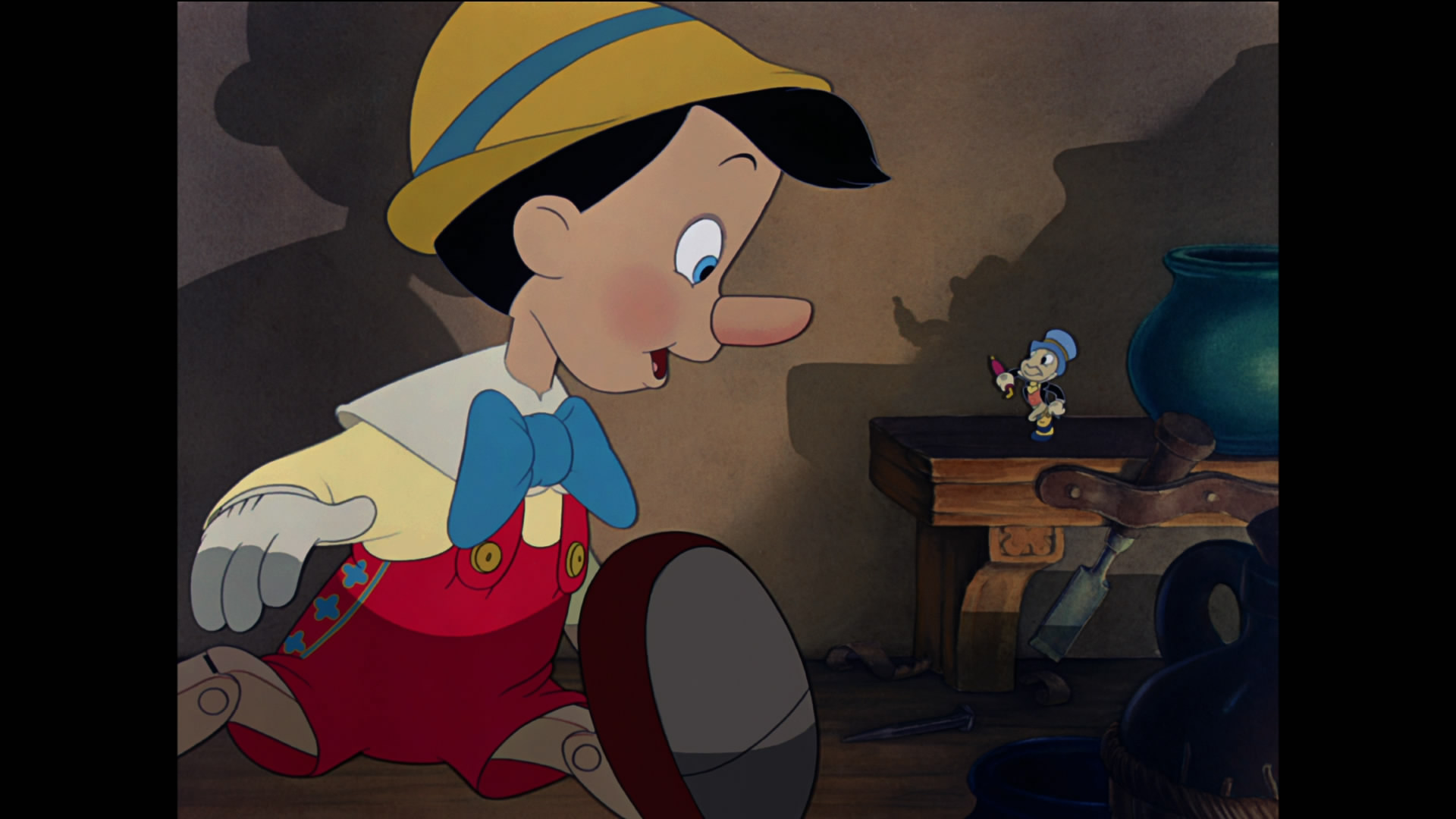 There has been extensive debate about this latest restoration of Pinocchio, notably what has been done to the color. Earlier home video versions carry a distinct, warm hue. Contrast and colors notably appear brighter and more vivid.

The question remains whether or not that was the intent, or an issue with the conversion to home video. Needless to say, colors are subdued here, in actuality flat compared to Sleeping Beauty which seemed to pride itself on boosted color. However, it is important to note what the color can do to a story, and with some of the darker undertones of Pinocchio, this Blu-ray seems proper and appropriate. Whether or not this is accurate is known only to those who animated it.

Beyond the color debate, there is no question Pinocchio has never looked this pure or sharp at home. Grain has been filtered to preserve each frame as an original animation cell, likely the only time removing film grain is acceptable. Clarity is remarkable, down to brush strokes in areas of thick, solid color (watch Geppetto’s pajamas).

Contrast is wonderfully bright. Black levels are pure without fade. Color is pristine despite the changes. Detail in the painted backdrops is stunning. Possible alterations noted (and unproven), there are no flaws in the transfer.

There are two audio options, the first a DTS-HD Master 7.1 mix, and the second a restored mono. There’s no question the DTS track is full, filling the soundfield with the classic music, and even providing a small kick to the subwoofer during the finale. Dialogue is notably scratchy and low fidelity, unavoidable with the source, but not detrimental to the enjoyment of the film.

The mono mix (Dolby Digital), despite lacking the full feel, does have benefits. It sounds natural, and the dialogue is not compromised compared to the music. Purists will undoubtedly prefer this, although home theater buffs gain only marginal improvement with the 7.1 mix.

Disney again goes all-out for a Blu-ray release, beginning with a picture-in-picture or audio only commentary from Leonard Maltin, Eric Goldberg, and J.B. Kaufmann. The PiP track includes various bonuses, mostly pulled from a documentary on disc 2, including stills, sketches, and photos.

Songs can be viewed with lyrics for karaoke fun with the kids, and a terrible “Wish Upon a Star” updated video should be burned. Various games are buried across both discs, and general Disney BD-Live content is on the first disc.

A making of is the highlight of the second disc, a 56-minute documentary that covers everything. Four deleted scenes are delivered in the style of a featurette, including an alternate ending. A separate deleted song is elsewhere on the disc. A featurette called The Sweatbox focuses on a small room on the Disney lot where animators showed storyboards on a screen to determine pacing and story problems.

A 10-minute featurette looks at the live action shot for animation reference, and how it was used. Geppettos Then and Now looks at toy makers from various eras. A collection of stills and trailer galleries close the extras.