When you review a movie, you should take notes. In the case of The General, those notes come away awfully repetitive, typically filled with adjectives for “amazing” and “remarkable.”

It’s appropriate as Buster Keaton was remarkable, and the stunt work in The General puts him in that rare category for stuntmen: the ones with a death wish.

The overuse of visual trickery present in modern day films has only served to solidify the astounding work present in this silent classic. Keaton shows little trepidation when climbing around a speeding train, moving with a quirky, natural grace.

Still, there is a sense of chaos to these stunts, a complete lack of control even. Knowing the primitive knowledge of film available, wires and mats are not used, yet Keaton is willing to risk life and limb, tossing boards onto a train, purposefully causing them to fall near his person for a laugh. Standing on the roof of a speeding locomotive is no challenge either.

Keaton’s Johnny Gray is a character who is terribly unlucky, never looking in the right direction at the right time. His hat is snagged by a tree branch, he is doused with water, completely oblivious to the box car disappearance in front of him, and fails to notice cannons being fired right behind him. He is a loveable goofball, a character you can cheer for despite never hearing him speak a word.

In 30 minutes, Keaton has performed more alarmingly risky feats in The General than most films contain in their entire running time. It is a tease, as if Keaton is stating to the audience, “We can still top that.” He does, staging a fantastic Civil War standoff before dunking an entire train off a bridge without the use of special effects. The train remained at the bottom of the river until World War II.

Most kids grow up being told not to play around train tracks. That message never reached Keaton, or if it did, it fell on deaf ears to the benefit of film audiences. 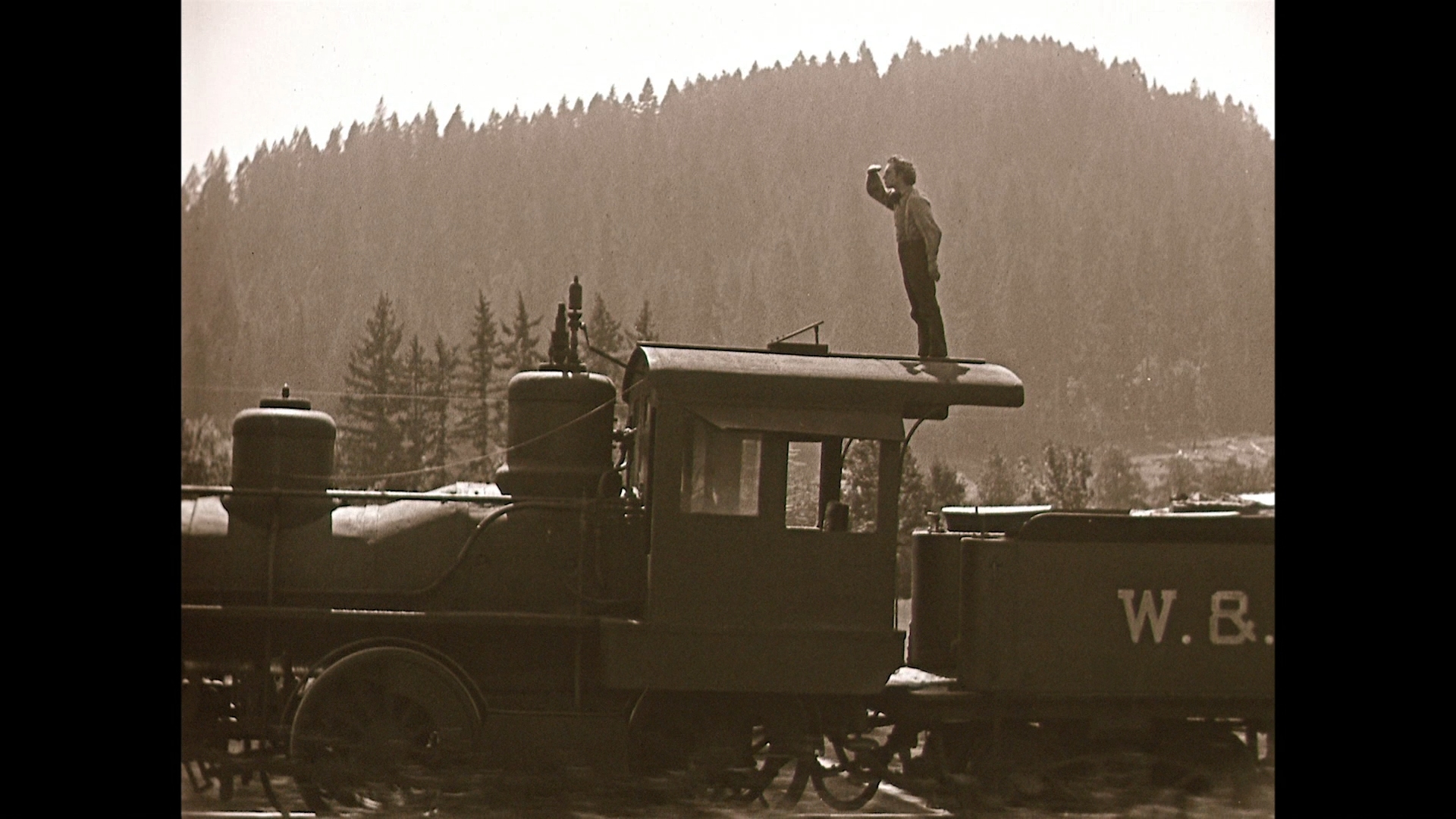 Kino International releases The General on Blu-ray with a sepia tone, correct to the original which was also available black & white. Personal preference would be the only difference.

This is a staggeringly beautiful AVC encode, retaining the light grain structure with no noticeable artifacting. Print damage is notable, even severe at times, but never becomes dominant over the visuals. Sharpness is maintained without fault, and detail is truly spectacular. Clothing is defined enough to bring out textures and patterns. On the train, you can see individual wood clippings strewn about. Grassy plains are defined, and even a limited amount of facial detail is evident.

Long shots are maintained beautifully without breaking down into a digital mess. Contrast is bright and satisfactory. The notable complaint is a significant amount of haloing around the characters and some background objects. This is most evident early as Keaton approaches Annabelle Lee’s home. It exists in countless shots and does not appear digital, but possibly a weird effect of print deterioration. There’s also some rather significant edging, high contrast edges harshly sharpened, although the end result isn’t as destructive as you would suspect.

It is almost ironic to offer thoughts on the audio of a silent film, but Kino’s DTS-HD mastering of the 1987 Carl Davis score (and the 2.0 PCM mix) deserves credit. The score itself is superb, capturing the nuances of the performances through music. This Blu-ray delivers it clearly with limited distortion noted at the heaviest portions. A mild enveloping effect is enough to offer a level of immersion, making it slightly more desirable than the PCM effort, although either is an admirable effort.

Two compressed tracks include Robert Israel’s take on the classic era themes, and a Lee Irwin organ effort from 1970. These lack the fullness of the Davis score, but also offer a unique spin on the music and how it can affect the film.

Features kick off with an informative 18-minute piece titled A Video Tour of The General. This shows viewers the actual train as it sits today, although not the one from the film as Keaton was denied his request to use the actual General. The Buster Express pulls footage from the actor’s other films that revolve around trains, running for close to six minutes.

Tour of Filming Locations offers glimpses of what the locations have looked like over the years, and what remains. A brief one-minute feature showcases footage that was shot of the set during filming. Two introductions made for TV, one by Gloria Swanson from 1960 and a quite heartfelt Orson Welles intro (that runs for over 12-minutes) are certainly rare. A trailer for the DVD release and an extensive stills gallery remain.