G-Force could be a lot of things. In fact, the mish-mash of ideas by themselves could have been great family fare.

Imagine those same guinea pigs lost, delivered to a pet store and forced to live the life of an average animal, tormented by its owner.

Imagine a world in which all of the appliances are owned by one company, and a chip inside them causes them to activate, transforming into menacing creations that terrorize the population.

Any of those concepts could have been turned into a movie on its own, but G-Force wants it all, and this becomes its undoing. There is little question the film should entertain the little ones, captivated by wonderfully animated guinea pigs mixed perfectly with the real world.

Their antics, although clichéd, are lively. The various gadgets they use are fun although lacking imagination. They infiltrate a corporate party at the beginning of the film, a rapid-fire introduction to the G-Force. Given their size, one would expect some clever or inventive need for their purpose. Instead, they carry tiny human objects, and a headset that allows them to talk.

G-Force picks up as the team is disbanded by high ranking government officials who apparently don’t see the appeal in talking animals. Here, the G-Force is forced to mingle with a Canadian crazed hamster/ferret (Steve Buscemi) and average guinea pig Hurley (John Favreau). While a generic “fish out of water” story, it does work, with genuine laughs as they try to accept their fate.

First time director Hoyt Yeatman and the writing team were undoubtedly told by producer Jerry Bruckheimer to push for the finale, sort of the producers own (and blatant) take on Transformers. Again, the idea of living appliances is fun, and sadly short lived. The worldwide panic isn’t even portrayed as the key threat, that instead belonging to a double-crossing villain controlling a large machine comprised of appliances.

It all feels too familiar, a shame given the potential. Maybe a sequel given the box office success can expand on this otherwise cute idea. 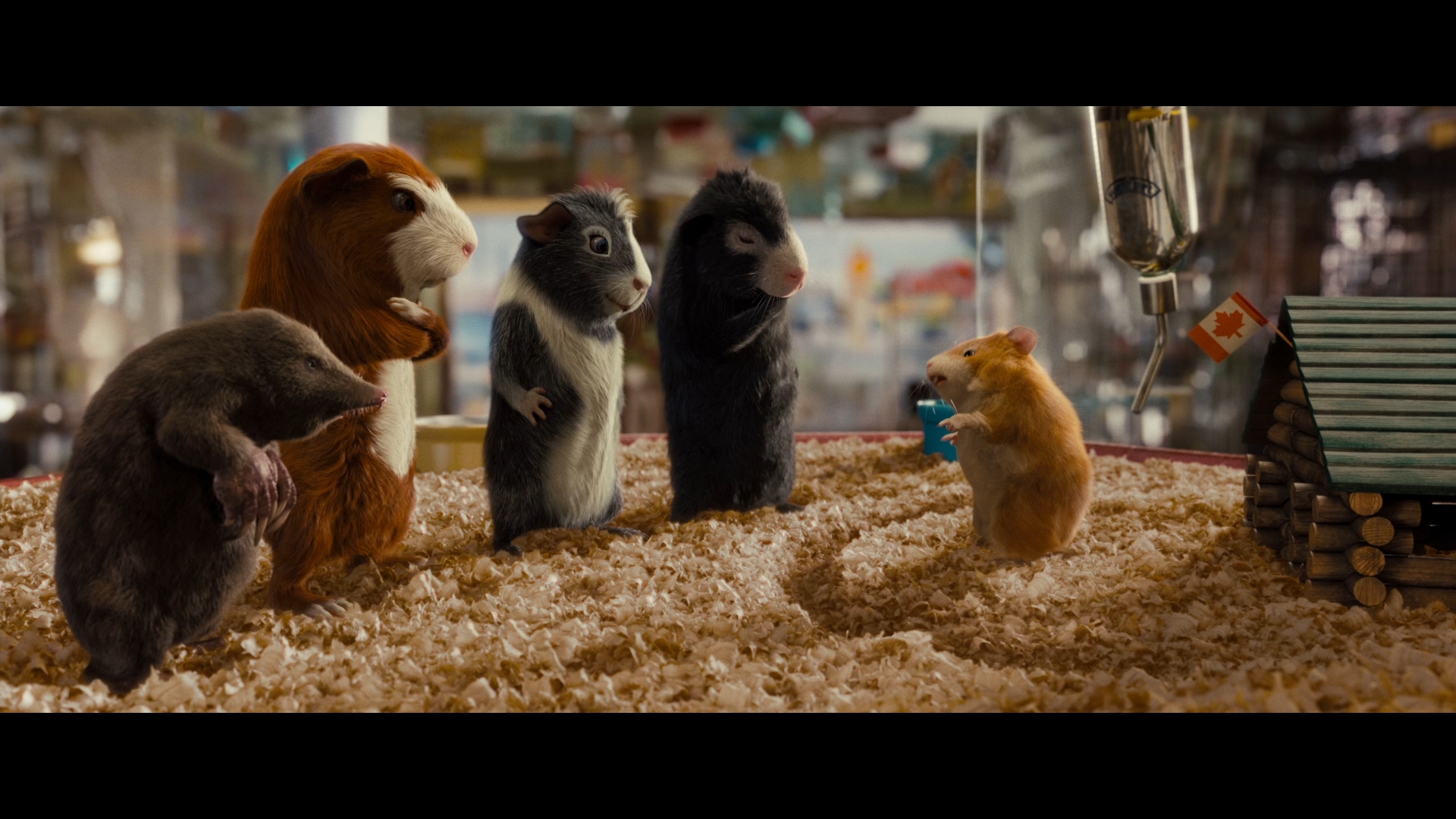 G-Force comes to Blu-ray from Disney, who deliver a vibrant, rich, colorful encode. Black levels are stunning from the opening nighttime raid, and never let up. Some minimal crush is noted, if limited to a few scenes. Light grain is barely noticeable.

Sharpness is routinely excellent, and definition superb. Facial textures are crisp in close-ups, but begin to dissipate in anything from the mid-range. Environments are defined cleanly with no noticeable compression. Look at the Velcro straps on the escape pods used by the guinea pigs which show stunning detail. A fireworks display late in the movie is a complex spectacle this encode handles without a flaw.

Some light ringing is evident sporadically, but inoffensive and not a distraction. Colors are beautifully saturated, particularly in the warm pet shop. Niecy Nash wears a bright pink shirt that practically glows it is so bright. Flesh tones are accurate despite the pumped-up color. A strong contrast creates enormous depth in the image, nearly replicating the 3-D effect from the theater.

Surprisingly, this is a rather flat audio mix. The soundtrack provides the strongest low-end thumps, leaving the action lackluster in comparison. The explosive finale lacks the subwoofer jolts it should contain, and the giant robot assault is a complete letdown.

Surrounds are still relatively active during the action, even if ambient audio is non-existent. The car chase sequence is the highlight, as the guinea pigs maneuver through the soundfield, while the spacious fronts and accurate surrounds track perfectly. As appliances come to life, they walk and attack in all channels, although these scenes are sadly brief.

Extras fall into the purely promotional or “for the kids” realm. Cine-explore, Disney’s picture-in-picture mode has director Hoyt Yeatman interacting with his guinea pig stars as they discuss the movie. Four featurettes, averaging around five minutes each, are blatant in congratulating everyone. The only one of any interest is Access Granted, which offers a tour of the animation studio. Another on Jerry Bruckheimer’s history is ego stroking at its worst.