An awe-inspiring piece of animation, Sleeping Beauty is a cinematic classic for a number of reasons. Its retelling of the fairy tale is forever engraved into children’s mind as the definitive version, it’s characters are unforgettable, soundtrack brilliant, and the animation work is easily some of the best to ever come out of Disney.

It’s impossible to find fault with this 1959 icon. Sleeping Beauty is a marvelous achievement, gorgeous from the opening story book to the final closing. Animation is smooth enough to pass for modern computer animation, yet it’s remarkable to imagine it was all done by hand. This is a film well ahead of its time.

Characters are rich and diverse, especially the three bickering fairies who provide plenty of laughs that still resonate today. Princess Aurora and Prince Phillip are the standard for every fairy tale couple to follow, eclipsing those that came before them. Despite only having limited dialogue outside of the music, the animation brings them to life.

A rich soundtrack provides a fun, lively, and at times terrifying backdrop to the on-screen action. At times, it’s brilliantly in-sync with the animation, adding yet another layer to this masterpiece. It’s impossible to appreciate the subtlety in only one sitting.

While the center story of Sleeping Beauty may only be enough to carry a film about 30 minutes long, Dinsey’s adaptation adds a number of memorable characters to push the narrative to feature length. It’s undoubtedly beneficial, and it’s hard to imagine the film without King Hubert, the three fairies, or the evil queen’s minions who are probably still looking for a baby to this day. It’s what makes this 1959 piece the definitive classic it deserves to be. 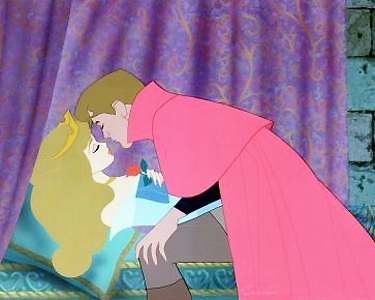 Disney has spent more money than you’ll ever see in your lifetime restoring Sleeping Beauty for its first Platinum Edition Blu-ray release. The result? One of the best transfers you’ll ever lay eyes on. It’s expected that a modern animated film is going to be top tier, but for a hand animated feature from 1959 to equal them is an accomplishment few will match.

It’s almost impossible to truly describe in words how brilliantly colorful this transfer is. The primaries are incredibly rich and bold to the point where few films can match their intensity. There’s not a single spec of dirt or imperfection on this print. Sharpness brings out every individual detail in the animation, giving them new life.

It’s notable to say a few shots appear significantly softer in the earlier forest scenes, and one shot of the fairies discussing their plans. It seems to be more of a source issue, or an attempt by the animators to give the movie some form of camera depth. Either way, it’s a problem easy to overlook, especially since the film is presented in its true original aspect ratio for the first time.

Disney has also taken the extra step to improve the audio, delivering a staggering DTS-HD 7.1 mix. The soundtrack benefits the most, thanks to the discovery of new original masters. The music literally envelopes the viewer every time it’s cued up, not to mention it sounds modern in terms of its remarkable clarity.

Sadly, the rest of the audio is overshadowed. Voices tend to go from crisp to faded in the same scene. There’s little doubt the dialogue was restored, but when the same scene features the clarity of the music, it’s hard to ignore the difference. It’s undoubtedly something that can’t be fixed, but it is a distraction nonetheless. Dialogue nicely travels across the sound field though, and there are a significant number of effects in the rear channels. However, the two extra rears seem reserved for the music only.

Since no expense has apparently been spared elsewhere, the extras are loaded with content. A commentary from John Lassiter, Leonard Maltin, and Andreas Deja is available as audio only, or a picture-in-picture feature loaded with film clips and still pictures. The audio only version seems archaic by comparison. A pop-up trivia track can fill in any blanks the commentary left behind.

Sleeping Beauty premiered with the 30 minute short Grand Canyon which is included here, remastered in hi-def and a DTS-HD track. It’s spectacular viewing. A rather unique feature is called Dragon Encounter which is more of less a CG showcase for Blu-ray, utilizing a 7.1 mix purely for the sake of it. It’s first person, and the viewer is put in the middle of a battle with the film’s dragon.

All of that sits on the first disc. Everything else from here on out is on the second. This one starts off with two different featurettes about the Sleeping Beauty castle that used to reside at Disney Land before being taken down. A Castle walkthrough recreates the entire exhibit in CG, and lets the user interact to find out various facts while the tour lasts.

Picture Perfect is an extensive making of even at 40 minutes, loaded with interviews and factoids. Two featurettes, including one dedicated to the forest dance number (Sequence 8), are additions to the documentary. An alternate opening and deleted songs have been restored with new audio. Storyboards are included along with brief live action clips used as an animation reference.

Sound of Beauty discusses the audio restoration, and is actually presented in 7.1 so you can compare the new and old. A collection of original trailers and art galleries follow that up, and this disc still has more to give. The Peter Tchaikovsky Story is a 50 minute episode of Disneyland, the first program to ever be broadcast in stereo, with Walt Dinsey himself explaining how the stereophonic effect can be employed (requiring multiple radios at the time). Another short retro featurette is Four Artists Paint One Tree, detailing how the artists handled the task of creating the film from a purely artistic perspective.

Finally, a selection of games for the kids will probably keep them occupied for a few minutes at best. BD-Live support is included, although it chose to lock up during the update process.

Note: This disc was selected as a reference quality Blu-ray by DoBlu in association with ReferenceQuality.com.