Both a loving parody and homage to classic Chinese martial arts films, Kung Fu Hustle is brilliant. Every scene contains something memorable, whether it’s original or a spin on a classic fight from another movie. A wonderful soundtrack adds a campy, light-hearted feel that completes Stephen Chow’s certified classic.

Those who fear the R-rating expecting graphic violence have little to worry about. While it does contain some blood and amputating, it’s never overly offensive ala Saw. The violence it intentionally campy, using a variety of effects from cartoony CG, wires, and impressive stunt work. It’s a blast to watch when it blends.

The story, concerning a young, unknown kung-fu master looking to take down the evil Axe Gang, throws some fun left field twists that keep the audience off course. Visual gags are prevalent and constant. None of the gags fall flat, and recurring image of an overly strict apartment manager with a cigarette in her mouth regardless of the situation never gets old.

Numerous fights are unforgettable, ranging from straightforward classic style to a supernatural brawl involving instruments that is amongst the film’s best moments. It’s staggering how long and complex the battles are considering (by modern standards) the modest $20 million budget. Choreography is better than some films meant to be taken seriously, not to mention the amount of originality put forth.

Kung Fu Hustle is an incredibly impressive effort that hasn’t aged a day. For genre fans, it should be considered as nothing less than a bona-fide classic, albeit in a different way given its over-the-top antics. Laughs are non-stop, and with a zippy pacing  (only about 90 minutes of screen time), it has endless potential to be viewed countless times. 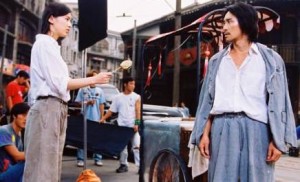 At times, the film shines on Blu-ray. There are moments of exceptional detail, but this one suffers like many discs from the early releases on the format. Colors are amped up to the point where they bleed out. Long shots are murky and soft. Some light artifacting is noticeable, and the contrast doesn’t offer much pop. That said, there are some impressive sights, and certain scenes done at night are actually more impressive than those during the day. A re-release down the road wouldn’t be surprising.

Kung Fu Hustle comes with a Linear PCM Cantonese mix, an odd choice. If you don’t have a receiver capable, you’re stuck with an English Dolby Digital dub. This review is based on the PCM language track. That said, the mix sounds overly loud and forced. Yes, the surrounds track incredibly well, but they’re also overpowered to the point where the fronts are drowned out.

Bass is powerful and highs are crisp, but it’s all too obvious the audio has been pumped up to make it sound better than it might have been. It fails. It sounds nice, but also incredibly artificial. It probably won’t bother many, although audiophiles will be disappointed.

A loaded commentary that includes Stephen Chow, Chan Kwok-kwan, Lam Tze-chung, and Tin Kai-man is fun. Obviously, it’s subtitled. A TV show used to promote the film features much of the cast and crew discussing the movie. It’s nicely detailed and loaded with footage from the set during its 42 minutes of screen time. However, it always feels like you’re being sold on the film instead of the honesty you’ll get from the best features like this.

Two short deleted scenes are followed by a Ric Meyers interview with Stephen Chow. Meyers knows his Asian cinema well, and shows it here with extensive questions. A short collection of bloopers are rounded off by a small selection of trailers.