Guillermo del Toro’s masterwork to many, Pan’s Labyrinth is an acquired taste. A fairy tale set against post-Civil War Spain, the story centers around Ivana Baquero, who plays Ofelia. She deals with the hard realities around her by imagining creatures, or at least that’s one theory.

Performances are the key to the film. Sergi Lopez is impossible to like, a sadistic, twisted Captain who steals every scene he’s part of. Baquero is astounding, able to play a role that’s well beyond her years. Her part calls for an incredible array of emotions, and she’s able to convey them all.

The visual style of del Toro is unmistakable, and with the few creatures in the film, their designs are highly unique and focused. Doug Jones is fantastic inside two different suits, including the eerie Pale Man. The fantasy realm truly offers some spectacular sights, and the CG work is phenomenal.

Unfortunately, there is little of it. Surely the result of a low budget, the fantasy feels restrained and cramped, as if there should be more to it the audience is never allowed to see. It could be taken as a small child’s imagination only allows so much, but the reality of the business is obvious.

That leaves a war film that’s focused on few characters, and doesn’t deliver anything inventive or new. Compared to the stunning new visuals of the creatures, the vast majority of the film is a dark, dreary story of rebels fighting against an insane enemy. Violence is common, graphic, and extremely harsh. It’s necessary to the story, yet considering how brutal early sequences are, it’s to the point of repetition by the film’s end.

Character’s also do stupid things. While it’s one thing for a child to disobey orders, not sticking around to kill someone (only severely injuring them) who is about to torture you significantly lowers the sympathy for that person. It comes off as a forced ending purely to create additional emotion in the final frames.

Finally, the film leaves an ending that can be interpreted in many ways, and without editorializing too much, it’s irritating. You create something that takes incredible imagination, time, effort, and thought, yet you can’t finish it? A director is a storyteller, and the audience is there to view/listen to that story. Why not ensure what you’ve done is closed to fully realize the potential in the end? Instead of feeling emotional over the ending, it becomes a distraction to start thinking about whether or not what you’re seeing is real in the film’s world.

Pan’s Labyrinth is a complex story, one that will likely be dissected in film classes for years to come. That doesn’t mean it works as a film, or that it’s even entertaining. It’s wonderful to see a director create something that would be otherwise child-like for an adult audience, but the end product is simply a mish-mash of open-ended ideas that annoy rather than entertain. 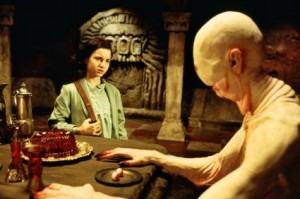 In what is a rare move for New Line, this is a surprisingly awful Blu-ray effort. Opening moments are quite promising, lush with detail in faces and individual stitches visible on clothes. A small hint of edge enhancement on mountains in a long shot is a sad precursor for what’s to come. The movie has been DNR’d to the point where almost no detail is left in the frame.

It’s simply tragic that the visuals have been marred in this way. Faces look plastic or waxy for much of the film. A few shots do provide some excellent details, yet they’re sporadic and wildly inconsistent. Brief moments of film grain show what this transfer could have been.

On the short list of positives, black levels are superb despite a small amount of black crush from time to time. Color is strong, and the contrast is bright resulting in a nice depth to the image. Sharpness is consistently perfect.

At least the studio delivers an outstanding audio mix. This is a booming DTS-HD Master 7.1 mix loaded with sound in all channels nearly non-stop. The LFE receives some of the heftiest work the format has to offer, whether from gunfire or the Faun’s footsteps. Surround work is extensive, from bird chirps during dialogue to incredible gunfire during action scenes. This disc also contains some of the world’s best echoes on a home video format.

Extras carry over from the 2-disc DVD, with the addition of a visual side to the commentary. You can listen to del Toro’s commentary, or have some visuals culled from various other features on the disc. There is no new content sadly.

Four pieces are contained under featurettes, the best (and longest) of the lot being Pan & the Fairies which deals with the awesome visuals the film can provide. Power of Myth deals with inspirations for the film, while two brief featurettes deal with the color, tone, and music.

A nearly hour long episode of The Charlie Rose Show has multiple Spanish filmmakers discussing their work, one of who is del Toro. A director’s notebook contains loads of material from the planning process and storyboards, including some additional brief featurettes. Digital comics and a section of trailers complete this disc.