The dysfunctional Duttons are back in Yellowstone’s excellent fourth season. Season Three’s finale saw a coordinated attack on the Duttons place all their lives in serious jeopardy, including family patriarch John Dutton (Kevin Costner) bleeding out. Spoiler alert, the Duttons survive and are looking for revenge in one of Yellowstone’s most thrilling seasons yet.

While the series veers ever further from realistic drama, the exceptional cast keeps drawing in viewers with their mesmerizing portrayals. Yellowstone’s over-the-top conflicts push several characters in new and unexpected directions. Beth and Rip even adopt a kid, sort of, while all this crazy stuff is happening around them.

Searing drama is tempered with fantastic action and touches of humor. The cable drama on Paramount Network has become a ratings smash thanks to its take-no-prisoners brew of vivid characters set in a modern Western setting of ranch life in Montana. Season four sees John and daughter Beth in direct opposition against Jamie, the brother who happens to be the state’s attorney general.

Ranch hand Jimmy’s arc sees major development as he’s kicked off the Yellowstone ranch and grows up. Will Patton lends a hand as Jamie’s biological father, prodding Jamie into conflict against the man who raised him like a son.

Yellowstone never strays far from the primary challenge hanging over the Duttons’ head – how to protect their beloved ranch and family legacy from Wall Street firm Market Equities ruthlessly pushing them out in favor of local development.

The biggest change in season four are flashbacks intended to introduce 1883, the Paramount Plus prequel series set in the 19th Century. 1883 stars Faith Hill and Tim McGraw as the pioneering couple who first started the Yellowstone ranch, an earlier generation of Duttons. The flashbacks certainly add a new wrinkle to the show’s mature storytelling.

Season three’s addition Josh Holloway is unceremoniously dropped as a guest star. In his place for season four is Piper Perabo, playing an environmental activist who gets entangled in the Duttons’ schemes.

Co-creator Taylor Sheridan has struck gold with Yellowstone. It’s safe saying the series is quickly becoming a modern classic in long-form storytelling, four seasons into its run. Expect it to remain on air as long as Kevin Costner doesn’t get bored.

The gripping drama and taut action fuel the Neo-Western’s popularity, but there’s no doubt cast members like A-Lister Kevin Costner and Kelly Reilly keep everything together. Most shows are starting to slow down by their third or fourth season. Yellowstone only seems to be accelerating. 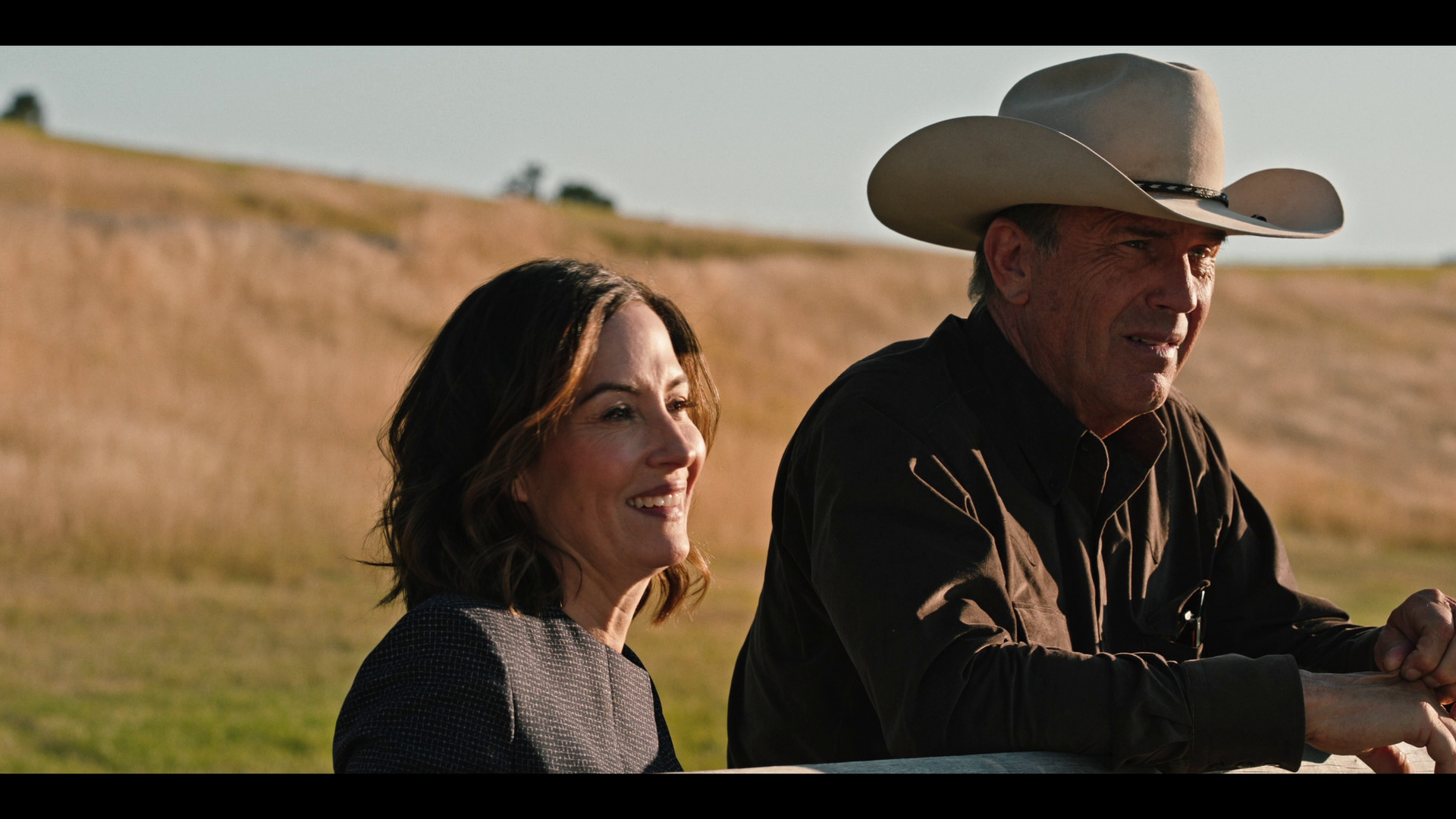 It’s quite notable Yellowstone is one of the few television programs offered in UHD quality on streaming services – the razor-sharp video exudes pristine clarity and beautiful color saturation. Replete with eye candy and panoramic cinematography, Yellowstone is one of the most gorgeous-looking shows ever filmed. I can understand why Paramount bypassed releasing the series on 4K UHD given the market but it’s definitely worthy.

All ten episodes of season four are spread over four BD-50s by Paramount. Yellowstone has always been a stunner on Blu-ray but there’s something qualitatively different about season four. The picture quality is outrageously great, some of the best ever seen from a cable production.

Highlighting the scenic, rugged landscapes of Montana, the picturesque show’s 2.00:1 presentation looks better than ever on Blu-ray. Having caught season four on Paramount’s cable channel, this 1080p Blu-ray is in a whole other league for video quality. Wonderfully crisp definition is bolstered by amazing depth and perfect black levels.

Close-ups reveal incredibly fine detail down to the pores of each actor’s face. This is reference quality digital cinematography with a clean, neutral color palette. Paramount’s generous AVC encodes are immaculate, free of artifacts.

Yellowstone’s 5.1 Dolby TrueHD audio is mildly reserved given the many action scenes. The entire surround soundstage is fully utilized with music often spread across several channels. Crystal-clear dialogue reproduction isn’t drowned out in the modestly dynamic mastering. Gun shots and car crashes could offer more in terms of impact. Yellowstone’s sound design is crisp and precise, vividly portraying the realities of ranching.

As the hype sticker on the slipcover proudly boasts, Paramount has packed over four hours of bonus content on this Blu-ray release of the fourth season, including “never-before-seen” featurettes. Television sets haven’t received this much supplemental content in years. Paramount knows the edgy drama is both a fan favorite and critical darling, so it makes sense they’d go all out for their hit show on home video.

The discs are region-free. The four-disc set arrives in a slightly thicker than usual BD case with a cardboard slipcover. The only missed opportunity here is the lack of real 1883-related extras, though both Faith Hill and Tim McGraw appear in brief interview segments. Paramount must be saving that content for 1883’s own future Blu-ray release.

The featurettes are wonderfully informative and revealing without dipping into the typical nonsense of EPK fare. Pretty much the entire cast, including stars Kevin Costner, Kelly Reilly, Cole Hauser, Luke Grimes, and Wes Bentley, appear on camera thoughtfully breaking down important episodes and their characters’ evolving attitudes. Taylor Sheridan shares his expansive vision for the series as a whole and how everything should fit together.

All ten episodes receive their own behind-the-scenes featurette with a changing mix of relevant cast and crew, discussing significant developments within the episode and important scenes. If you are looking into insight on each character from the actor playing them, this is essential viewing.

Stories From The Bunkhouse (All in HD):

Each episode also receives a stimulating and often humorous discussion from supporting actors Denim Richards, Ian Bohen, and Jefferson White, who all play Bunkhouse characters. The lively and often hilarious chats exist to gently mock the show and themselves. Each segment running ten minutes or more, these fun discussions are priceless entertainment for fans.

Opening Pandora’s Box: Making Yellowstone Season Four (37:08 in HD) – A comprehensive overview of the season and its aims from co-creator Taylor Sheridan and major cast members

Working the Yellowstone: Making It All Happen (06:26 in HD) – Covers the show’s transition to filming everything in Montana for this season, including moving the entire set.

Inside Yellowstone: Season 4 (03:32 in HD) – A promo featurette introducing season four after the shocking finale of season three.

Full disclosure: This Blu-ray was provided by the label for review. This has not affected the editorial process. For information on how we handle all review material, please visit DoBlu’s about us page.