Ears perked up around Hollywood when noted screenwriter Taylor Sheridan (Sicario and Hell or High Water) announced a television project with actor Kevin Costner centered around the machinations of a powerful ranching family in Montana. Then toss in an excellent ensemble cast with Wes Bentley, Kelly Reilly, Luke Grimes, Gil Birmingham, and Cole Hauser. Constructed around the political intrigue of backroom deals and land ownership under the largest ranch in the United States, Yellowstone has an authenticity often lacking in much of today’s television.

Airing on the Paramount Network, lofty expectations for the ranching drama were met and then exceeded in a strong first season that takes a little time getting off the ground. If you enjoy emotional weight and character-driven storytelling, Yellowstone’s taut drama weaves compelling characters into thoughtful plotting.

Yellowstone is a series that follows the important Dutton family in Montana, led by patriarch John Dutton (Costner). The Duttons control the largest contiguous ranch in the U.S. and must deal with constant attacks by greedy land developers, clashes with a nearby Indian reservation and the Federal government. The Duttons will do anything to protect their land, occasionally landing on the wrong side of the law.

Yellowstone takes a little time finding its groove. Season one runs nine episodes, but it does take several episodes of world-building to introduce the Dutton family’s complex dynamics. John Dutton is the aging scion of the family. His son Jamie (Wes Bentley) is the dutiful son, a sort of point-man for his father’s vast ranching empire that extends to politics in Montana. Jamie is running unopposed for attorney general, to help out the family’s business and protect their interests.

Yellowstone is demanding viewing with immense rewards for patient viewers

Daughter Beth (Kelly Reilly) may be the most multifaceted and fascinating character on Yellowstone. Having lost her mother, she’s the sole woman remaining in the heavily male Dutton world. A tough, no-nonsense businesswoman, Beth is a high-powered executive that has turned her back on the family’s ranching empire. She’s got many emotional issues tied to her place in the family and her jealousy of Jamie.

John’s most loyal soldier is Rip Wheeler (Cole Hauser), a farmhand willing to do anything to protect the Duttons. He also happens to love Beth. It’s easily the best performance I’ve seen from Cole Hauser, who I barely recognized in the role. Hauser gives a performance befitting classic Eastwood as the tough, misunderstood Rip.

There’s so much to like about Yellowstone, but you have to be patient for its complex storytelling to completely unfold before rendering a verdict. The show definitely pushes the envelope for regular cable television, including adult language and uncommon nudity. There’s an edge to its thoughtfully-developed world that couldn’t work on network television.

Co-creator Taylor Sheridan has fashioned an intricate American family saga with riveting drama and morally ambiguous characters. Some have complained about the overwrought emotional palette in the serialized drama. I wonder if those people stuck around for the entire season, as everything gets tighter and more nuanced as the season finishes up.

Yellowstone is demanding viewing with immense rewards for patient viewers. Costner is wonderful and Kelly Reilly is a real revelation. The second season will air on Paramount Network in the summer of 2019. Let’s hope the successful drama keeps up its quality. 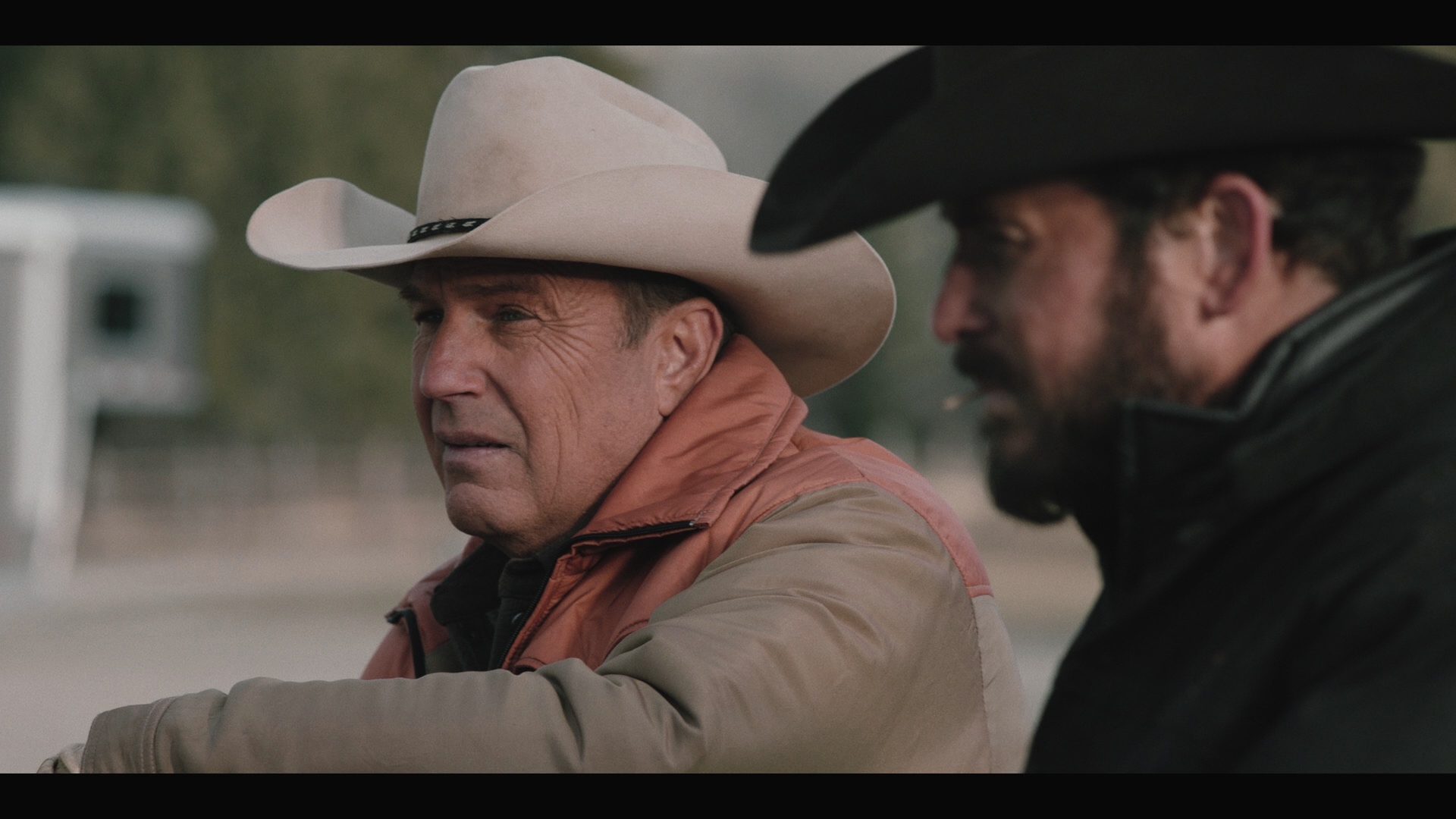 Originally airing on the fairly new Paramount Network, Yellowstone is something of a prestige drama for the fledgling network. It’s evident a lot of money has been poured into the Kevin Costner-led series and that translates into reference-quality video on Blu-ray. Yellowstone’s picture quality matches the best-looking Blu-rays from premium cable. Having caught a few episodes when it first aired on cable, the Blu-ray presentation is clearly a notch above. This is a carefully-filmed drama with superior detail and razor-sharp definition.

All nine episodes of the first season are spread equally over three BD-50s. Encoded in high-bitrate AVC that takes up most of each disc’s capacity, it’s a flawless compression effort of the visually striking cinematography. Filmed in bucolic settings, Montana’s landscape lives and breathes in pristine 1080P resolution. Approximately presented in an unusual 2.0:1 aspect ratio, the rugged scenery is practically a co-star in Yellowstone.

The technically perfect presentation highlights the sheer amount of high-frequency content possible in close-ups taken with modern digital film cameras. Yellowstone is easily one of the best-looking shows ever released on Blu-ray.

Yellowstone has high production values for a cable series and the 5.1 Dolby TrueHD audio is quite impressive for television. There is a level of theatricality often absent from television audio. This is a tight, accurate surround mix with effective immersion and the right punch when a loud grizzly appears, or shotgun blast goes off.

Paramount has been erratic at releasing their television shows on Blu-ray in the past. Yellowstone receives a fairly loaded set of special features with creator Taylor Sheridan and the entire cast making contributions. International fans will like the fact the discs are coded region-free.

A slipcover is included with the three-disc set. A flyer for the 2 LP soundtrack comes inside the case.

Behind The Story (All in HD) – All nine episodes come with a short, concise featurette recapping the themes and focus of the episode, interviewing prominent cast members and crew. Most run between 3 and 4 minutes. These are more promotional in nature and work better as EPK material.

The following featurettes have a handy play-all button. All told they comprise 48 minutes of behind-the-scenes material with cast and crew, including stars Kevin Costner, Wes Bentley and Kelly Reilly.

Cowboy Camp (01:50 in HD) – The entire cast were given lessons in horseback riding.

Taylor Sheridan & Kevin Costner On Yellowstone (24:49 in HD) – Compelling interviews with the two men on their goals for the show and how it came together. Told with behind-the-scenes footage, it explains how the show was put together.

An intricate, layered generational ranching saga from writer Taylor Sheridan and star Kevin Costner comes together quite nicely in this first season from Paramount.

The unaltered images below have been ripped from the actual Blu-ray. For an additional 25 screenshots taken from Yellowstone: Season 1, early access to all screens (plus the 20,000+ already in our library) in full resolution, dozens of exclusive 4K UHD reviews and other perks, support us on Patreon.