A sadistic warden, the new peaceful prisoner, an uprising; in form, The Last Castle is every prison drama ever made. It’s not surprising who wins or who survives. Intelligently, Last Castle inserts complex morals about leadership, heroes, and a patriotic streak.

James Gandolfini plays Col. Winters, a military prison’s warden. His counter is General Irwin (Robert Redford), a decorated serviceman over generations. Their relationship looks at two wildly divergent methods, built from personal experiences. Irwin’s first visit to Winters’ office turns to criticism – Winters places military memorabilia behind glass, to which Irwin shrugs off as belongings of someone who never fought in combat. His deduction is right.

Winters uses authoritarian rule because he feels emasculated otherwise. Torturing those under his command is a way to feel in control and dominate, twisting militaristic ideals as absolutes. No longer does Winters see humanity, just things he literally looks down on as lessers. Gandolfini’s emotional numbness is chilling. He smiles only in a deluded smirk.

The prison yard becomes a racial boiling point when Irwin arrives. Almost as if a children’s movie, everyone sticks with their own, fighting among themselves. They resent Winters’ rule and cruelty. Irwin, who endured disfiguring torture during combat, admits his faults, able to accept his mistakes as much as those made by other inmates. Where Winters acts with an impossible, abrasive superiority due to rank, Irwin’s training led him to see himself as an equal. Therefore, it’s easier to pull a troop together and execute a smart, chess-like back-and-forth to wrestle control away from Winters.

There’s a lot to The Last Castle, commentating on how easily distorted military rule can become, and a prison system that doesn’t seek to reform so much as relentlessly punish. Making Irwin a conflicted, faulty hero resonates more than one written as totally purified. He’s forced to contend with loss, both in battle and in confinement. Even when Irwin knows someone will betray him, he leaves that decision up to the betrayer. There’s a trust at play, and a risk/reward method that allows people to determine their own fate. It’s slickly handled, overlong maybe, if with grand payoff thanks to the measured and patient development. 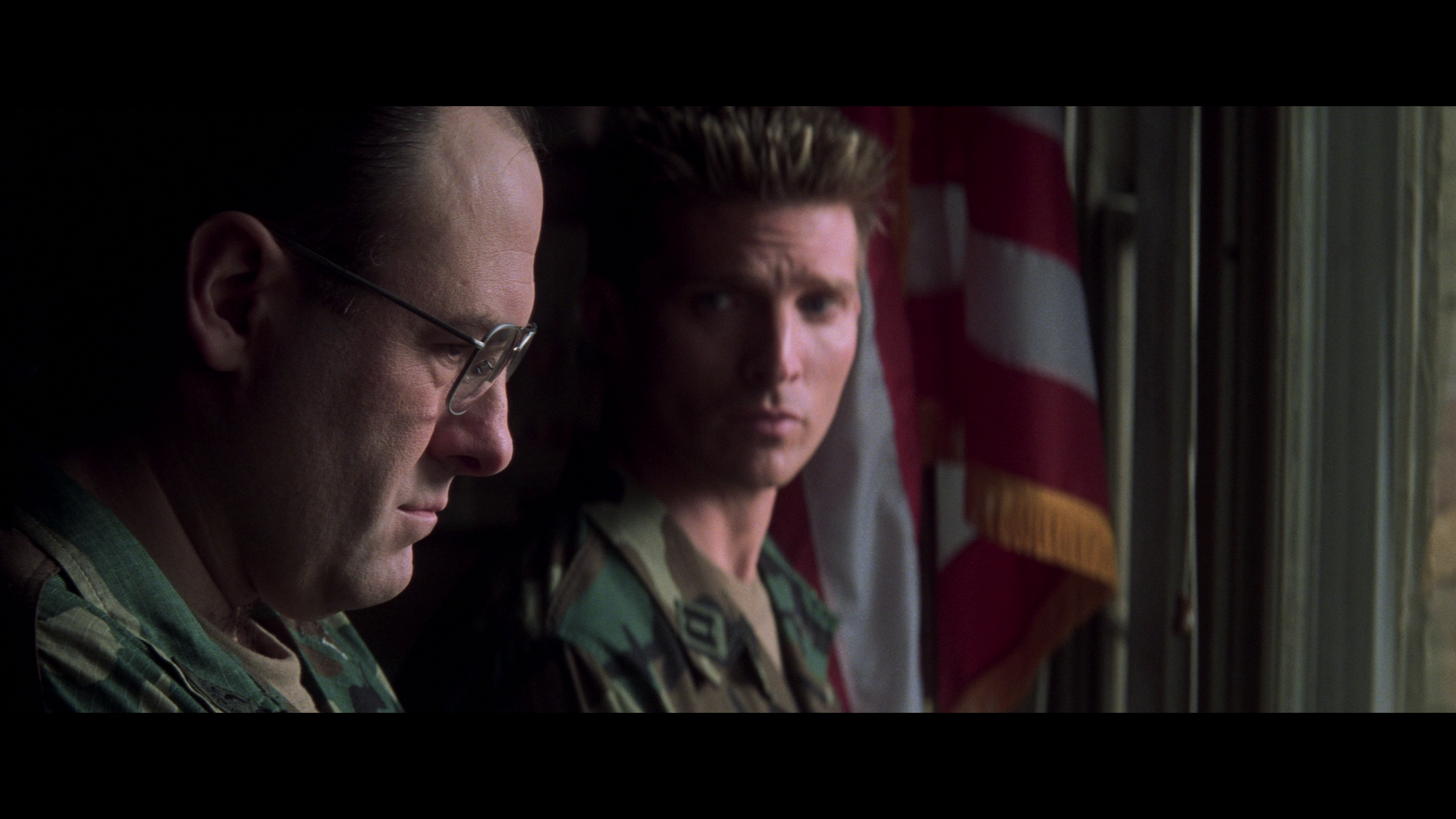 The color palette favors blander hues, dim in saturation. Flesh tones veer toward a peachy hue, the only questionable element in something obviously designed to stay pale for aesthetics. The push toward blue likely leads to the awkward looking skin.

Black levels make a minimal mark on things, which like the rest, stay flat. However, contrast is blistering. Highlights make for a blinding presence, light sources – whether sunlight or interior lamps – all glow. Clipping does happen, if by choice in camera.

While not massive in its sound mixing, Paramount’s DTS-HD track does elevate the prison ambiance. When inmates slam on the bars, the sound rushes through the soundstage. Chatter echoes against the concrete cells. In the yard, the spread sends voices wide, stereos and rears activated. Rain splashes into each channel during downpours.

Low-end supports the music primarily. A few bumps elsewhere (minor at best), range is limited by the nature of Last Castle’s dialog-driven drama. The final act sets off a few explosions and tosses rocks via catapult. Those produce minor jolts.

Director Rod Lurie drops by to offer a commentary track, providing 10 additional minutes in a new retrospective interview. There’s an alternate ending offered for the first time, which Lurie narrates. An old HBO EPK, deleted scenes, and trailer round the disc out.

The Last Castle is a morally complex and compelling prison drama that adds its own military take to an old, dated genre.

The 15 unaltered images below represent the Blu-ray. For an additional 27 The Last Castle screenshots, early access to all screens (plus the 120,000+ already in our library), 120 exclusive 4K UHD reviews, and more, subscribe on Patreon.