Alita’s world exists on the surface of Earth. Above is a floating city. The latter is where the rich live, dumping their garbage down on the poverty-riddled city below, a city run by a collection of refugees and immigrants.

The origin Japanese manga for Alita released 30 years ago. If there’s a wonder why it’s been adapted for American theaters in 2019, consider the blatantly portrayed social systems in place. No one from below can reach the city above. It’s anchored, and trying to scale the metal posts will bring out spiked barriers. No poor people. No immigration.

Robert Rodriguez never shined as a subtle filmmaker. At times, that worked. Sin City, From Dusk Till Dawn, Machete, Desperado; those films define his punchy, heavy style. Here, Rodriguez’s approach is again to go loud, with bits of generic young adult fiction tying up the rest. The choice to lean on teens and not respect their intelligence sours Alita.

Rather than carefully saying something, Alita chooses to shout

This future, post-war existence is set in 2563, yet basic teenage angst doesn’t change over the centuries, even when said teen is a cyborg. Alita throws a fit when her cyborg-fixing father won’t let her go out after dark. Her obvious boyfriend spouts, “She’s not my girlfriend!” when his relationship is mentioned, beyond cliché and deserving of a timeout in a screenwriter’s corner.

Certainly, there’s plenty to see. Alita’s future looks rundown but organically lived in. Mechanical and flesh bind most people, bits and pieces mismatched, citizens constructed from leftover, unwanted junk. Everyone in this movie is poor (except for the upper city’s leader), literally picking at scraps to survive. And health care is provided as a kindly courtesy by Alita’s father, Christoph Waltz, in an unfortunately restrained performance.

Various impressive visual effects keep up a creative spark. Then the story intrudes. In 2019, it’s not unusual for cinema to take shots at inhumane conservative policies. The good ones though do so with a soft hand; Alita uses whips, spinning defense mechanisms, 12-foot cyborgs, and dismemberment to deliver its concept for an idealist world.

Compare Alita to the Matt Damon-starring dud Elysium, where Damon fought through enemy forces to receive basic health care, a hilariously malformed allegory so firm-handed as to turn away even fervent progressives. The difference is in Alita’s enthusiastic action, dripping with unrestrained technique, stripped away when paired with a story this routine. Rather than carefully saying something, Alita chooses to shout… in all caps, on the internet. 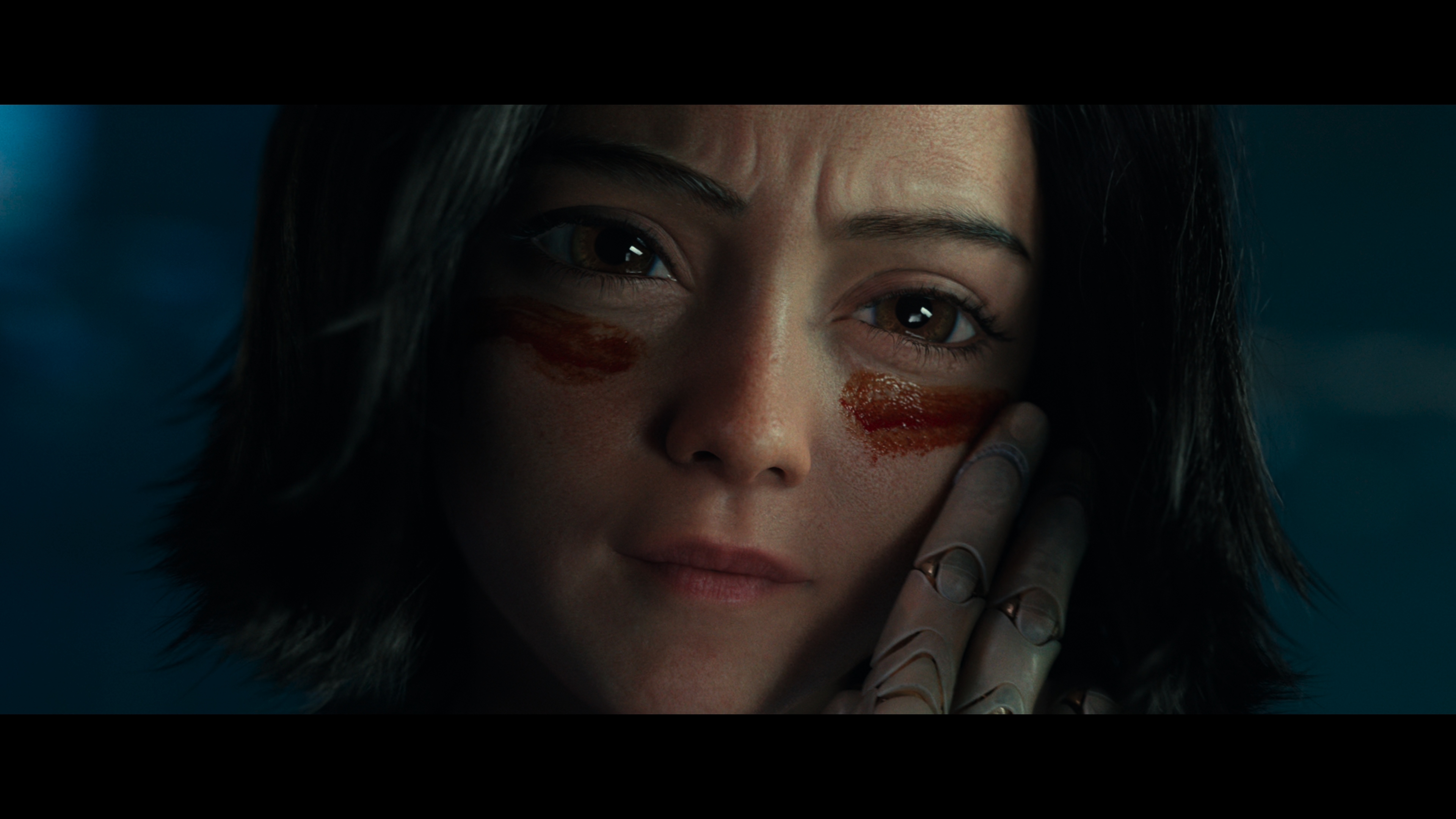 Packing some power via this Dolby Vision pass, Alita’s 4K disc pushes grandiose contrast. While scenes of motorball mix intense stadium lighting, sparks, and night skies, a battle between Alita and Grewishka in an underground scrapyard offers a magnificent mix. Contrasting energy produces deep, raw blacks and reflecting chrome creates the off-set. Alita cranks up the HDR to sell itself. The effect doesn’t hold back.

Elsewhere, the effects-heavy work introduces clumps of noise, often detrimental to detail. Alita is especially bothered, with Rosa Salazaar’s motion captured performance drawing artifacts. Those spots cause a loss, if not enough to take all of Alita’s energy. Shots of cities and stadiums show off tremendous resolution from afar. CG work on metal cyborg bodies shows the full range of artistic flourish.

Fidelity still stands out, especially in close on human actors. Facial definition ranks as A-class stuff. Pairing up is saturated color, given a warm hue early and then moving toward cooler tones in the back half. A push to primaries gives Alita a definite glow. Look at the shirt she wears not long after waking up, designed with the rainbow striping. That’s awesome. Even in the dark, color intensity stays high with a deep, pleasing density.

Kudos to Fox (and the Rodriguez/James Cameron combo, certainly) for including the 3D version inside the 4K package. That’s the standard. Or, it should be.

Aside from those flourishes, the goal here isn’t to push extremes. Instead, this material provides some marvelous stuff in terms of rendering metal bodies, where each piece layers to create visible thickness of joints, gears, and pistons. Seeing through such a cyborg is especially nifty. Other small touches include glasses jutting forward, natural and striking. Fall-in effects push for distance, with motorball scenes fitting in depth during hectic action.

This mix moves everywhere. It’s gluttonous aural spectacle, with stuff always spinning, flying, or panning. Overheads and surrounds engage at rare levels, with an equally wide split in the fronts. Action passes with accuracy, with the reference scenes (all of them really, but still…) being those motorball brawls. A take on roller derby, combatants pass through the visual space, tracking into rears with a subtle push from the heights expanding things further.

Being that Alita deals with metal people, it’s hardly surprising to hear they smash and crunch stuff with monstrous force in the low-end. Footsteps pound with each impact, while punches and kicks slam with dazzling weight. This is top-tier mixing, blowing out the potential for range and exceeding it.

A few motion comics open things, followed by the 20-minute featurette From Manga to the Screen, offering interviews if limited substance. Evolution of Alita explores the character, from what she represents to her design. A peek at motorball runs six minutes, and a Q&A from a London screening sends out only softball questions for 26-minutes. Robert Rodriguez teaches you how to make awesome chocolate in 10 Minute Cooking School, which runs for… five minutes.

A compilation of art and very cool multi-angle scene deconstruction (from mocap to raw animation to finished film) shows how much digital work was involved.

Alita is full of hectic action and visual effects splendor, but the story is over-the-top obvious with pitiful dialog and aggressive themes.

The following six screen shots serve as samples for our Patreon-exclusive set of 47 full 4K screen shots grabbed directly from the UHD: