No Poliwhirl, No Sale

Detective Pikachu’s opening act sticks out. Shadows dominate the aesthetic. Scenes take place in a rundown bar. It’s sweaty and moody, with blinds allowing limited light into every dusty room. The set-up borrows the visual tropes of noir cinema, lavishing proper attention on mood and style. Except now, instead of chain smoking, hard drinking gumshoes, it’s a kid. And a yellow fur monster.

Fans begged for Danny DeVito to voice that yellow thing – Pikachu, of course. Ryan Reynolds got the gig. In came the fan service escapism, emboldened by CG and a derivative finale causing that exotic intro to weep.

Justice Smith capably carries the human side, more a diversion for the swarm of realistically rendered, friendly critters. His arc – grieving after losing his mother and being estranged from his father – follows formula. Expect nothing exciting or new. It’s a kid finding his way in the world with the help of an amnesiac sidekick.

Broader is Ryme City, a future-like utopia with some Blade Runner-like alleyways and glossy skyscrapers. People live in harmony with Pokemon, and as these things go, the mystery swirls around the corporate entity at the core of Ryme. Again, the plot goes where expected.

It’s fancy at times. The color is attractive too. Splendid design work subtly moves Detective Pikachu into a plausible, stylish real world, Pokemon aside. In the idealist undercurrent of this story, Pokemon do not fight one another – that’s banned in Ryme. There’s no attempt to counter the videogame idea of Pokemon being used in bizarre cockfights; that’s cautiously sidestepped, even when the creatures duel.

With its final moments, the villain-that’s-not-a-villain scolds humanity, the harshest indictment of anything in a soft and comfortable family-aimed tale. People suck, but there’s still enough good to go around and keep us all alive, strangely deifying one of the Pokemon as if said creature holds supreme power, a terrifying thought. Forcing them to fight one another isn’t the best idea.

Undoubtedly, the generous kitten eyes flaunted by Pikachu work. He’s adorable. Other Pokemon do the same too, prancing around joyfully, all realized not in pixels on a portable screen, but big budget special effects. It’s appropriate then the climactic brawl happens across a bunch of balloons, as free and bouncy and empty as the rest of Detective Pikachu. That’s fine. Safe and fine. Also derivative, dry, and vacant flashiness. 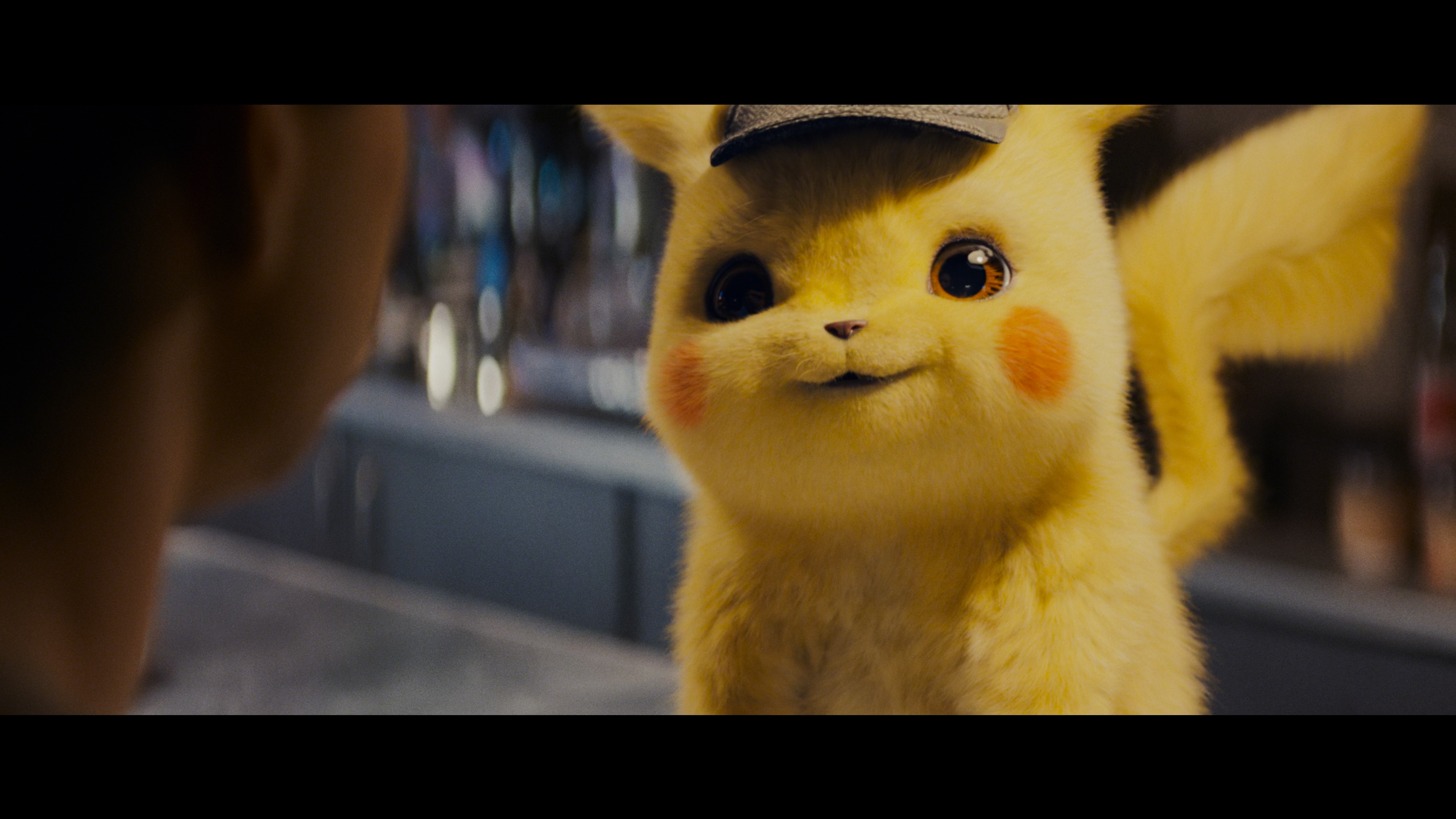 Shot on 35mm, the thin veneer of grain situated over Detective Pikachu looks natural and firm. Warner’s encode doesn’t show signs of struggle in keeping the structure resolved. That allows detail to bloom, with firm facial definition and stellar shots of Ryme from afar. Sharpness remains consistently high. Credit to the effects team who render Pokemon fur and reptile-like skin that holds up under 4K scrutiny.

While pumped up on blue – the primary color of Detective Pikachu – a bevy of additional color feeds into this production. Pikachu’s yellow never dims, even in the darkest scenes. He sticks out even in shadows. Other Pokemon follow suit. Scenes with fire, chrome, and plentiful neon lights stretch saturation to an extreme, but never going too far.

The concern on this disc becomes the HDR pass. Not shadows – those look stellar, with pure black used frequently to coat Ryme’s seedier areas. Brightness is the worry. While things like fire and Mewtwo’s powers reach for maximum nits, overall contrast sinks to a middling norm. In general dialog scenes (during daylight, specifically) Detective Pikachu whittles from a lack of dimension, souring the otherwise fine imagery and limiting dynamic potential.

Paired with Dolby Atmos, the highlight of this sonic outing is the low-end. It’s heavy, and for such small creatures, they push plenty of energy into the subwoofer. Various explosions work their magic, swelling the room with tight, sustained bass. For a reference sequence, jump to the earthquake and splitting mountains, throbbing with intensity, stretching limits.

It’s an active, fun soundstage too, if not engaged as pleasantly as others. Pokemon wander around the space, calling out from behind and even above on occasion. Heights factor in sporadically. Directionality creates a convincing space, helped by city ambiance and widely space fronts. In an ever-growing list of impressive Atmos tracks, Detective Pikachu squares up a bit over par.

Over on the Blu-ray is Detective Mode (the UHD holds no extras itself), a fancy name for a typical pop-up feature. Video clips, facts, behind-the-scenes snippets, etc. play during the movie. Note the content within is not available elsewhere on the disc. If you want something specific, you need to hunt for it.

Creating the World runs 21-minutes, the key making of that sets the tone for everything else. Bonus features aim at the younger set, the latter included. Star Justice Smith speaks briefly on his Pokemon fascination for two minutes in a brief interview, and Ryan Reynolds hams it up about his role in another. Mr. Mime “commentates” over his key scene, obviously played for laughs, and an alternate opening adds only a little context. There’s a music video in the menu afterward.

Standard fare by 2019 standards, Detective Pikachu’s story of a lost kid finding his way in the world is risk only in bringing this brand to live action.