Jivaro is a movie of sweaty, barrel-chested men sailing on exotic Brazilian waters with their shirts open, fawning over the one American woman in their camp. The men fight one another in alpha male routines, and some even throw punches for fun, then laugh about it. Down the river a ways live wild native stereotypes, racially questionable, and the set-up for a finale in which they toss spears at the camera.

This movie lavishes the chance to soak in old Hollywood, a place where men were dominant, Technicolor was splendid, and 3D added kick to a stale screen romance. That’s all Jivaro is, putting Fernando Lamas in the lead to protect (then court) Rhonda Fleming. It’s rough going in terms of entertainment.

A catalyst is lost gold, sending the gold-crazed Richard Denning into native territory for riches. While not enough to overcome the common cinematic love triangle, at least Jivaro finds something to brawl over. Fleming, in Brazil to see fiance Denning, spends precious screen time resisting the obvious draw her and Lamas have for one another, leading to those bar fights and a few broken tables.

In the narrative, the stacks of cliches grow into the jungle adventure that closes things out. There, Lamas makes his masculine stand, standing up to sexist bullies and in a rare twist, letting Fleming sport a rifle in the closing moments. Credit where limited credit is due as Jivaro doesn’t otherwise give Fleming much to do. She stands around, letting Technicolor push her vibrantly red hair. Occasionally, Fleming slings some puppy love eyes toward Lamas.

Jivaro brings a romance novel to life with Lamas staged as the Fabio figure living in a place of certain danger where his status is never questioned. Before Fleming’s arrival, Lamas towers over native women and trades with squirrely natives, leaving no doubt as to his place as unofficial king of this land. Beneath him, a supporting cast, including a cameo role from Lon Chaney Jr. and Brian Keith, the latter whom Jivaro struggles to configure as hero or villain.

Consistency comes only from Lamas and Fleming, the two inseparable once they pair on screen. With certainty, Fleming’s fish-out-of-water city girl doesn’t stand a chance against Lamas’ screen perfectionism. She’s helpless to resist this romance. At one time, that the was feminine fantasy. Jivaro knows its place, and doesn’t shy from these derivative origins. 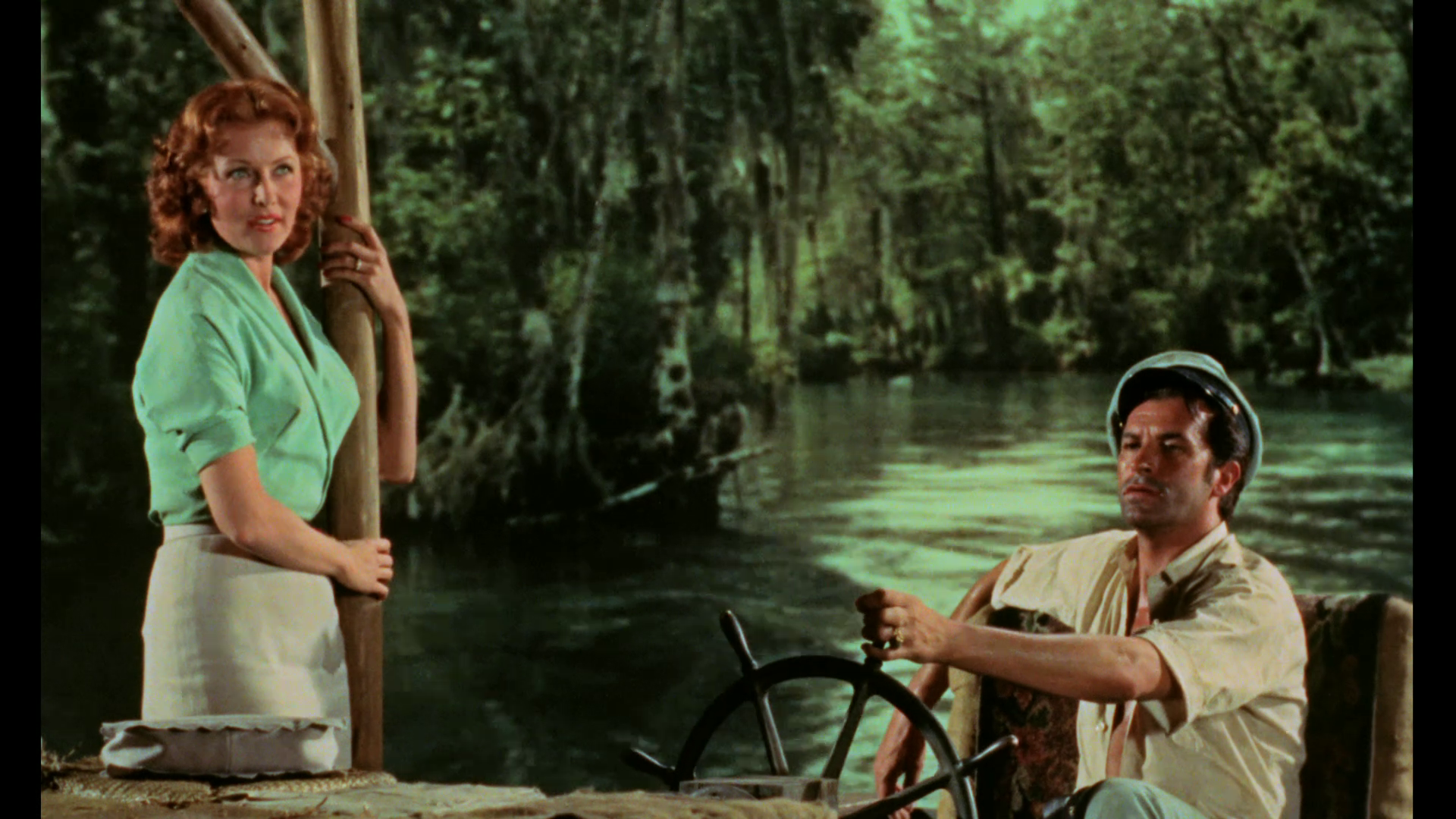 Immense contrast adds to the idea of constant sun pouring into the frame. Black crush becomes a problem during some nighttime imagery, leaving those scenes appearing blotchy. The rest presents shadow detail clearly.

Unfortunately, detail suffers from what looks like low pass filtering, muddying grain and sapping energy. Jivaro misses a filmic quality by way of sloppy encoding or mastering. Grain takes on a digital chunkiness. Print damage is more convincing, and acceptable too with one exceptionally brutal scratch in the first act. That clears up quickly.

Using a shot-to-shot method to determine depth, cinematography makes full, lush use of 3D. Jungles stretch deep, with layers of branches and leaves adding to the dimension. Foreground objects stay in play, always offering something to maintain the effect.

Jivaro plays a little with tossing things at the screen. Spears, fabric rolls, and bottles fly at the screen; anomalies, all of them. Mostly, Jivaro uses the technology for depth, rarely less than intense as with the best of ‘50s era 3D. Lamas’ stature is unmistakable and his presence emboldened by this format (as he was in Sangaree).

Suffering from distortion on both high and low ends, Kino’s offering of DTS-HD mono works best in the mids. A bit of leftover static isn’t offensive, not compared to crumbling drums and screeching treble in the score. It’s messy.

Dialog is pure though, well managed and clear.

Historians Jack Theakston and Hillary Hess (with some guests) provide a fine commentary. Fans of 3D will need to check in on the stereoscopic analysis that provides awesome, geeky insight into the filming process over an early scene.

Fernando Lamas bares his chest in Brazil during the romance of Jivaro, a sluggish, stock Hollywood romance livened up through technology.

The 15 unaltered images below represent the Blu-ray. For an additional 14 Jivaro screenshots, early access to all screens (plus the 30,000+ already in our library), 75+ exclusive 4K UHD reviews, and more, support us on Patreon.