Set right at the edge of the Revolutionary War, Sangaree doesn’t necessarily use that period. It’s merely a turgid tale of pirated shipping lanes, estate law, a dull romance, and costumes.

The only time Sangaree is of interest is when on trial. Barrel-chested hero Fernando Lamas stands up for the lower classes and slaves. A snobbish British lawyer calls a man insane for even considering charity for the impoverished. Lamas stomps on that notion. At least then Sangaree stands for something.

Otherwise, it’s contained to skimpy studio sets, with Lamas aggressively – too much so – courting co-star Arlene Dahl. A shirtless Lamas grabs Dahl’s arms, pins her down, and even hurts her. That’s not even considering a creepy one-handed massage. Pre-closing credits, the two end up together, because of course they do.

Lamas was cast to attract a female demographic, even if Sangaree likes to sway toward masculine-laced storylines

Although billed as a romance, and with the costume credibility to indicate the usual love story of the time, Sangaree is many things. Too many. There’s concern over the plague, disputes over living wills, corporate espionage (cira late 1700s America), thievery, and politics. Somewhere in that tangled mess of plotlines is Lamas and Dahl’s march toward inevitable marriage. That lack of focus is unlikely to keep anyone gripped though.

Lamas plays the adopted servant son of a war general. That servitude is another subplot, enough for British aristocrats to thumb their nose at Lamas as he rises in power. None of that lasts long either. Sangaree jumps around, and even with all that energy, the whole thing feels outright ponderous.

Certainly, the film tries. Shot in 3D, there’s a campy bar brawl where the fighters toss barrels at one another. Scenic views of Georgia warm this story organically, and certainly the camera takes all it can from its star. Even with the stumpy studio interiors, Sangaree finds a look. No doubt Lamas was cast to attract a female demographic, even if Sangaree likes to sway toward masculine-laced storylines. Everyone is out to punch someone it seems, or take advantage of the powerless women stuffed into the cast.

By the end, it’s an eye-rolling fairy tale. Even with all that came before, the droopy drama and various abuses, everything was, as written in a diary, meant to be. For all of the ugliness (including a body count), Sangaree just wants to have a cozy, sweet time in spite of its maddening, unnecessary complexity. That doesn’t work out. 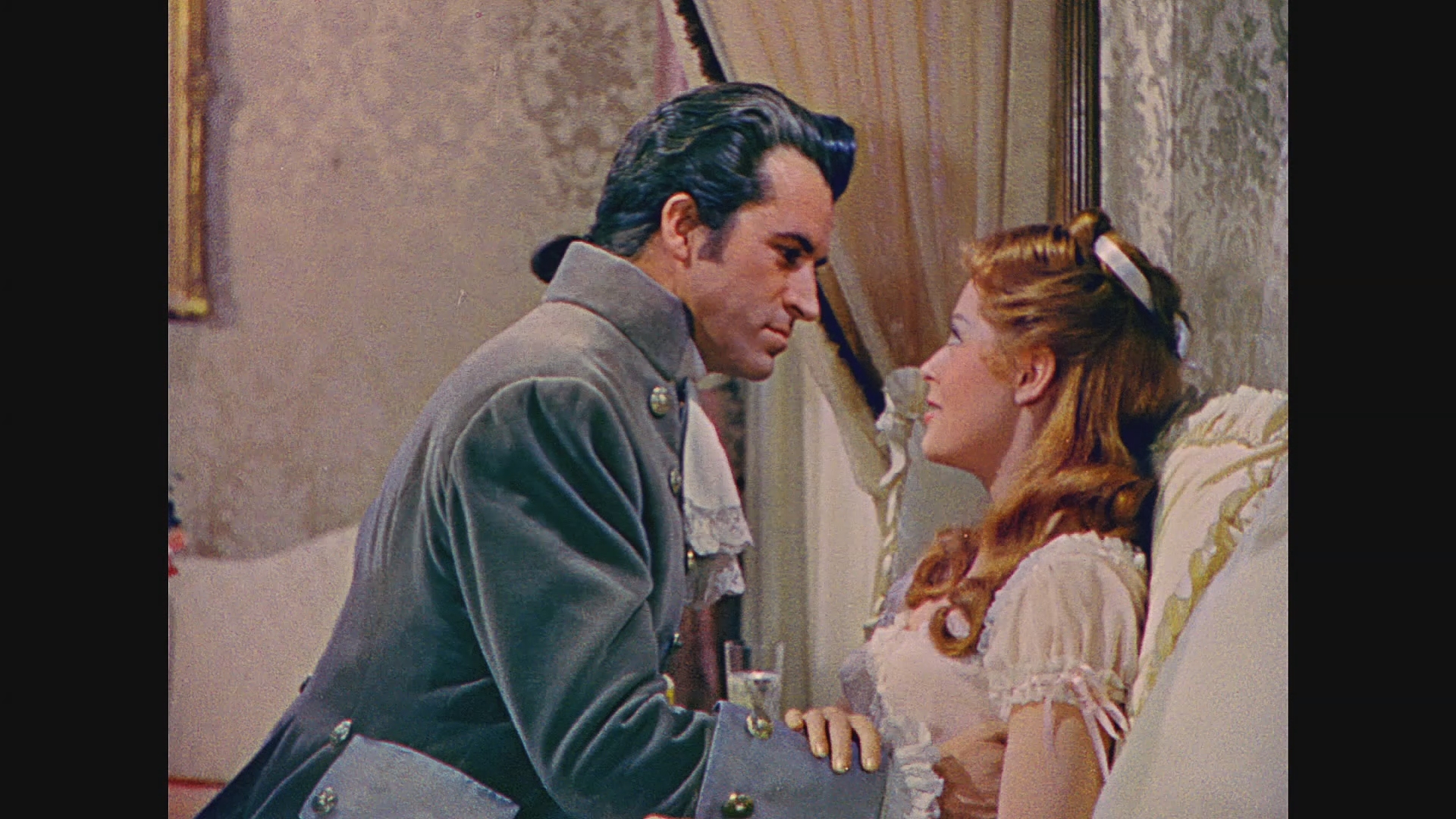 In 2D, Sangaree comes from a scan of the original camera negative and it’s quite beautiful. The Eastman color flourishes on screen. Costume selections benefit the scenery, chosen specifically for their contrast. If one character wears blue, the other is certainly donning red. High saturation brings out the best in these touches.

Details on that clothing runs high too. Texture is sublime. All of the studio touches in the stitching stand out. Interiors bring out period-accurate décor, visible into the frame. On the opposite end, exteriors resolve the various plants and wooden buildings in substantial definition.

Any problems lie primarily with the source. The tragedy of chemical dissolves can’t be undone. Some sloppy day-for-night footage goes too far, crushing details. The latter goes to extremes too. A few shots appear darkened to excess, rendering the shots ruined.

The print has scratches and dirt left. But, it’s to an acceptable tier given the age and status of Sangaree. Brightness is retained, and overall contrast stands out. Kino’s encoding of a perky grain shows few signs of struggle.

In 3D, this isn’t as simple. The left eye is the negative; the right comes from an interpositive. This image struggles a bit, with slightly imprecise bands of color. Those chemical dissolves look worse too. Overall, restoration work takes out most of these issues, leaving this 3D piece, generally speaking, identical.

As for the depth, while not the peak of the ‘50s 3D output, Sangaree does have some spectacular dimension. Scenes of gathered crowds revel at the chance to depict fall-in effects. Inside various mansions, chairs, tables, and other objects take advantage of the tech by reaching to the foreground. No doubt these rooms were laid out precisely for the camera.

Pop-out material doesn’t offer the same deft hand. That’s there because of expectations, and done with little of the same care. Ignore the few glimpses of things tossed toward the camera. The rest of Sangaree performs well, free of errant alignments or cross talk. Other than those moments where the cinematography impedes (those overly dark day-for-night shots), it’s a pleasant piece of early 3D.

A mildly thin score and overall limited range pour from this DTS-HD mix. Age gives this audio a natural layer of static in exchange for organic fidelity. Some popping and a few skips also impede things.

Aside from the expected results from 60+ years of storage, Sangaree delivers audible dialog. A few looped lines even stand out for their uneven quality.

Sangaree’s Blu-ray offers two trailers, one the standard 2D, the other a 3D one, but sadly presented flat. An excellent restoration demo is presented in full 3D, with great technical information in the beginning. It’s easy to see how rough the 3D print was before given this disc’s touch. Finally, there’s a radio presentation of the story that runs an hour.

There’s a lot to sit through in Sangaree, an early 3D release from Paramount that deals in far too many tangents to build its central romance.

The 15 unaltered images below represent the Blu-ray. For an additional 13 Sangaree screenshots, early access to all screens (plus the 17,000+ already in our library), 50+ exclusive 4K UHD reviews, and more, support us on Patreon.