Chris Pratt’s Jim Preston is lonely. He woke up from hypersleep too soon on an extended journey through space. These are tough times for the technically gifted maintenance man. Preston will die before reaching the destination, some 90-years away still.

So Preston wakes up another passenger, the cute journalist, dooming her to die the same as he. Nice guy.

Passengers draws on a lonely empathy. It finds reasoning for Preston’s actions, if not pity. To an extent, it nearly justifies itself – Preston needs a partner to heal the now malfunctioning ship (named Avalon) taking a small swath of humanity to a new planet. Yet he doesn’t wake up a pilot or high-ranking official, someone with knowledge of the circumstance. Preston wakes up the woman he finds attractive.

In writing this thing, Jon Spaihts – capable enough to pen Doctor Strange – digs a hole. Conceptually, Passengers creates a circumstantial Stockholm Syndrome. Jennifer Lawrence’s Aurora falls for Preston, because of course she does, a flailing male-powered romance fantasy where the lone female agrees to piles of sex without knowing the truth. When she discovers the reality, it’s a mere wink and “men get lonely” pleading that brings her back to Preston’s arms.

Underlying the narrative design is a potentially sharp tale of corporate failure. Aurora spits exposition concerning the corporation that owns the ship and a built-in, computer-regulated class system separates Preston from Aurora. Preston eats poor, dried food; Aurora accesses high-end hot meals. People on this ship live based on what they can afford. Interesting, until action supersedes this dialog.

The situation of Passengers comes wrapped in cruelty. Everyone Preston and Aurora knew? They’re dead after some 90 years of space travel. They’ll never know anyone else since they woke up early, a tantalizing and dramatic scenario. While applause is due for Passengers’ refusal to cave to cynicism, it’s too artificial and uncomfortable for a positive hero’s tale. Fascinating material sits behind the grossly conceptualized love – nay, the victimhood – story.

But Passengers won’t hold to anything. Clean production design feels familiar, as if a hodgepodge of better sci-fi cinema. The score, too, resonates with pieces of Alien’s haunting sterility. Passengers eventually clamps onto a space disaster wherein the male “hero” sacrifices all until the woman literally reels him back in – a gross topping on this already questionable production. 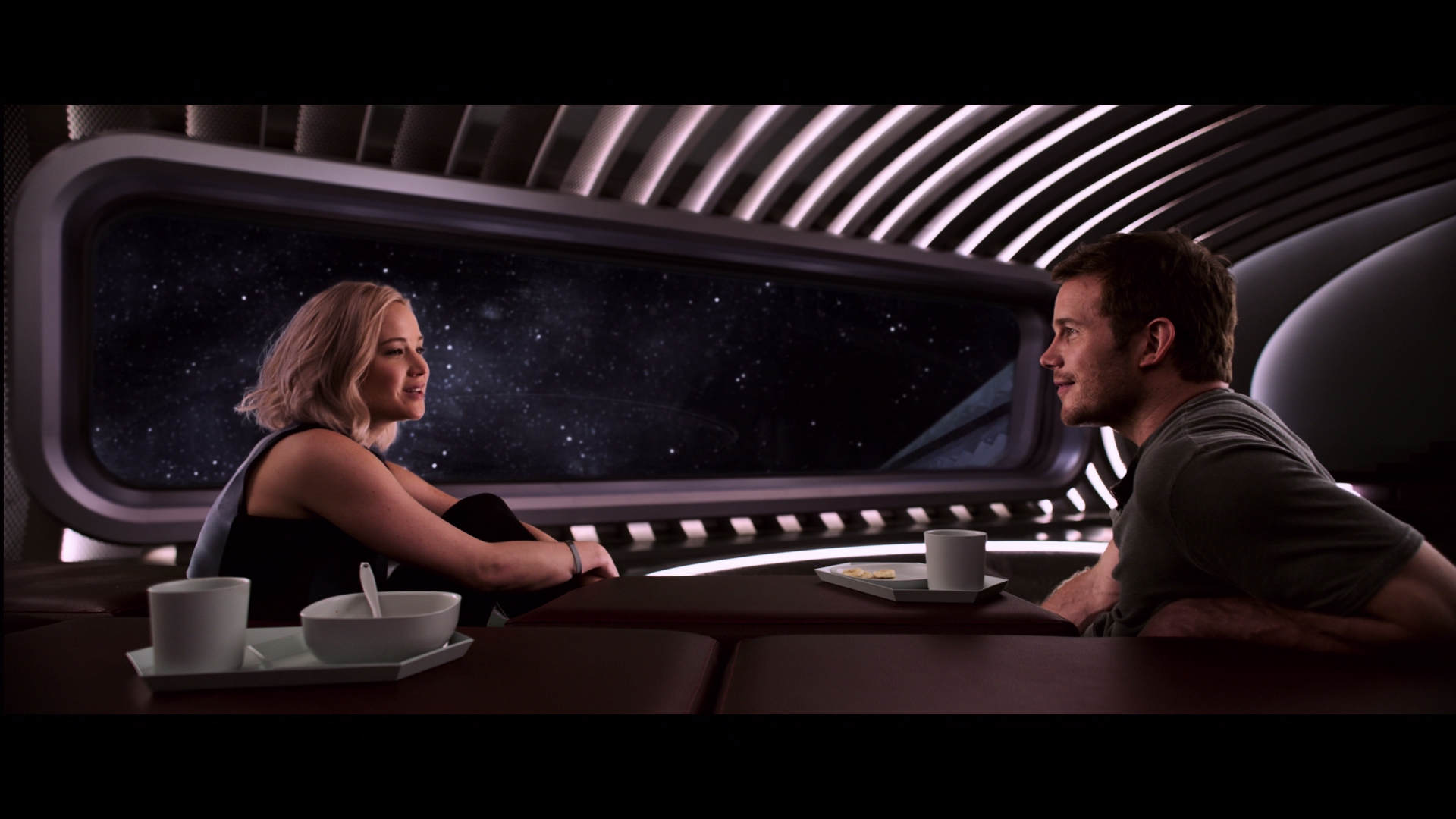 Finished at 4K, Passengers is certainly a detail showcase. Some of the impressive sites come from the bar set. With the camera looking at a distance, detail in the faux woodwork and carpet excels. Inside a high-end restaurant, a lavish chandelier shows spectacular definition.

Spot-on flesh tones highlight the UHD presentation. While seemingly meant for HDR, those effects appear toned down. Lights don’t carry the intensity of other discs and even when panning a star, the spectacle looks lacking in brightness. However, black levels – especially in space – covet shadow detail. The depth of Passengers more than makes up for its lack of zest.

Rather plain and lacking density, Passengers looks lackluster on Blu. Flesh tones suffer from a yellowing effect, robbing the film of its natural, somewhat subdued look. Unimpressive color suffocates the appeal. A pinkish hue covers much of Passengers, but only on the Blu-ray. The flesh tone effect recalls Sony’s Ghostbusters 2016.

Fidelity stays in view. Close-ups catch plentiful detail, some exceptional. Shots of the ship passing through space capture distant stars and the busy texture of the craft itself. Environments likewise reveal excellent resolution, using that 4K master for all its worth. Minimal shimmering is visible.

Black levels appear muddy, slightly weakened and missing density. Some dimensionality is lost, although not to a severe degree. Key scenes in which lights go out fall into black successfully.

For 3D, image depth is better than expected, with momentary lapses. The long halls and spacious sights of the ship’s interior make for a grand showcase. When calling up holographic displays, the 3D effects excel. Plentiful dimension is established and held as the small crew looks on at the interface. Special effects outside the ship also perform well as the circular design calls for 3D.

At certain times, 3D effects disappear, more so with general conversation. Backgrounds seem to touch the actors in spots, taking away any fall-in material. Cinematography does not lean on the tech either. Little consideration is given to framing, leaving foregrounds empty and images reliant on the intensity of the conversion.

Sony again crimps the Blu-ray (and 3D Blu-ray) to a DTS-HD 5.1 track. It’s unnecessarily limiting as the UHD offers the appropriate Dolby Atmos.

For a movie designed for isolation, sound typically minimizes itself. Until the action picks up toward the third act, Passengers utilizes tremendous LFE support. When the ship passes the lens, engines flare. Electrical shutdowns hum with deep, room shaking kick. A bit of music as Pratt plays a dancing game offers a clean bass line too.

Later, it’s a plentiful showcase. Slingshotting around a star, the bass picks back up, then leading into a stellar anti-gravity moment as water splashes down, spilling throughout the soundfield. If there’s a moment where the 5.1 track misses out, that’s it. A sequence involving air loss sends wind into each channel and near the reactor, debris begins to shoot out, panning between channels, all while the sub throbs. Great stuff.

The UHD and 3D discs hold nothing. The Blu-ray hosts a few featurettes of minor interest, the first being Casting the Passengers, 10-minutes on why they brought in such big names (as if this wasn’t obvious). Visual effects earn seven minutes of behind-the-scenes material in Space on Screen. On the Set With Chris Pratt involves more people than Chris Pratt for four minutes. Content in the 10-minute Creating the Avalon seems like a fit for the effects bonus feature, yet it’s also interesting on its own. Some deleted scenes, an outtake reel, and faux commercials for the space travel service send this disc home.

Chris Pratt does creepy things and Jennifer Lawrence is helpless in the unsuccessful sci-fi dud Passengers.

Click on the images below for unaltered, full resolution screen captures taken directly from the Blu-ray. Patreon supporters see our screen shots first, view our entire library in .png format, and gain fast access to 14 Passengers exclusives for as little as $1, perfect for custom cover art, film study, or other applications.