The best non-vacation ever

Carrying the tenderness and imbecilic actions worthy of any John Hughes script, Christmas Vacation is slathered with recognizable holiday caricatures – maybe too much so. No doubt this third Vacation is overloaded to a point of being utterly plot-less, but the overarching charms and Clark W. Griswold’s excited mannerisms (and eventual anger) have, through 25 years of aging, cemented this gem as a goofy, heralded classic.

After all, few films ever ignite every Christmas catch-all scenario as well as this. Well, maybe Gremlins if the rugged beasties represent the flood of family as an invasive holiday species. That fits too. Christmas Vacation (despite a total lack of vacation) is sort of an inventive sole proprietor in this depiction of broad seasonal mayhem.

It misses nothing as Griswold (Chevy Chase) massacres the Warner backlot in search of the fabled, “old fashioned Christmas,” which through the lights, the family, and various explosions, he comes to realize hardly exists. In some sense, it is almost impossible in a vicious consumer cycle of buy, purchase, buy and a mix-in of dinner table politics.

Clark W. Griswold’s excited mannerisms have, through 25 years of aging, cemented this gem as a goofy, heralded classic.

Somehow though, in spite of rabid squirrels, chainsaws, and kidnappings, Griswold finds it. “It” being the niceties of the season where SWAT teams drop their rifles to carol and the loopy aunt sings the National Anthem to a barbequed plastic lawn ornament. If nothing else, Christmas 1989 would prove memorable for this clan.

Everything swirls around Clark, the passive aggressive family mentor who means so implausibly well yet never seems to find an out which can rescue a series of continuing in-home disasters. In spite of an overwhelming number of supporting actors smashed into the script’s pages, Christmas Vacation finds a suitable arc for the Griswold’s head of household – from jolly caroler to power tool slicing madman and back again.

Others are not left out, rather generalized. Beverly D’Angelo has little to do other than calm Clark down, the duo’s kids sort of stare in agony over their inescapable situation, with Randy Quaid in a constantly uncomfortable hover mode. As an aside, there is a line spitting goldmine from Mae Questel as Aunt Bethany and her hard critiquing on-screen husband William Hickey. Those two almost conquer the screen munching presence of Quaid.

As almost a lucky accident, Christmas Vacation would actually become one of the last of its generation – an old fashioned Christmas movie. The film opens with charmingly obsolete animated credits, surrenders to the simplicity of smartly written comedy, and Hughes would only take one more shot at scripting the holidays with the rambunctious Home Alone. Maybe Clark knew this was it too. 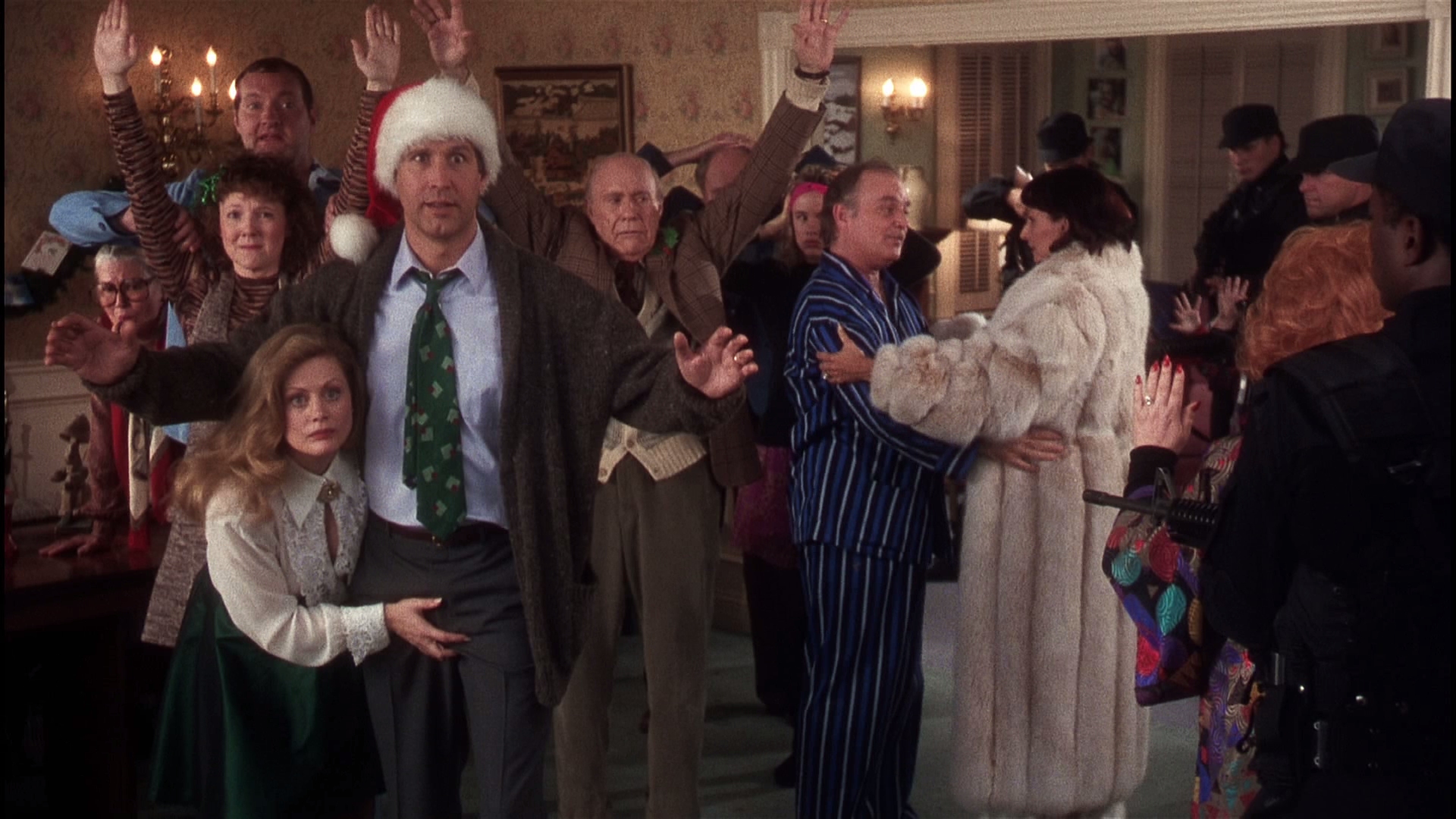 Warner has dumped this movie to Blu-ray twice, “dumped” because this outdated and often chunky VC-1 encode is inexcusable. Source mastering isn’t much better. The print is soiled by damage and comes from low resolution work better meant for DVD than this HD format. No matter which version, the stand alone or 20th Anniversary Collector’s set (reviewed), the disc itself is the same.

Compression parameters aim low, creating messy grain over most scenes. In motion, a bit of haze smears the image a touch, alluding to the unfortunate quality in almost every shot. Certainly, the light tinge of sharpening fails to help, raising grain levels and adding halos. Christmas Vacation was let out on Blu-ray to die.

All of this low grade technique flattens color except for reds which burst as if lit by neon. Forget consistency. For all of its cheer and snow, Christmas Vacation is dull in contrast with barely any bite. Those colors won’t help either and black levels rarely reach consideration of being actually black. Shadows are utterly bland.

This one deserves better as it grows in popularity.

Only a few scenes are of interest. The opening, with Clark erratically driving, displays a bit of channel movement if no LFE activity. Any scene of in-home panic such as the squirrel assault will feature a bit of travel between speakers, albeit minor. There is some life to this track, just hung on the technical restraints added by Warner.

Beverly D’Angelo, Johnny Galecki, Miriam Flynn, director Jeremiah Chechik, and producer Matty Simmons produce a fun commentary track as the lone extra (except for a trailer). However, it seems to be missing the rather enormous heart of this movie in Chevy Chase.