To its credit, From Dusk Till Dawn 3 is the better of the two sequels, following a twisty plot that falls off the edge into vampirism in the third act. Before, it’s a western -not a good one mind you- that follows an outlaw escaping a hanging, meeting his gang, and robbing a stagecoach. The spirit of the original Clooney/Tarantino flick is alive.

Surely the film was made on the heels of another western. Direct-to-video films don’t have it in their budget to craft a new period, let along the make-up that dominates a rapid fire finish. Dawn 3 has production values, even if they’re borrowed. Costumes and sets add some legitimacy to a saggy narrative.

Dawn 3 peppers the screen with brief flirtations of action, a shoot-out here and there in an effort to keep things moving. This one plays it a little too straight even with a little satirical work on the heads of two Christians looking to begin a Bible school. Outlaws hang a young girl, and heavy handed sexual undertones dominate the character arc of a hangman’s daughter. The subtitle to this feature ruins where that plotline is headed.

Wandering the desert, the crew of bandits and their stagecoach counterparts arrive at what would eventually become the Titty Twister in the first film. Danny Trejo stands behind the counter serving drinks, although suspiciously disappears when he turns into a vampire. A stock actor takes over his role, and it’s not well hidden.

Baseless nudity and outrageous gore continue the series tradition of offering what the core audience came for. The bar kicks off the evening as a random fight spills blood, and strobe lights begin dancing despite the entire scene being lit by candlelight. A few ancillary characters end up being bit while the remaining cast dashes underground to safety. It’s of course a crypt because that’s spooky on camera, and a few more brawls ensue as panic sets in.

Somehow, the film finds time in-between all of this for a sepia-toned dance number that’s awfully out of place. Dawn 3 wants that kooky, irreverent tone, and keeps trying. A kick to the groin with a spiked boot of a fully turned vampire removes the creature’s testicles in full view of the camera. All the while, deaths signal dramatic music or shocking camera angles. It’s a confused film, although it has a few moments that rise it above whatever Dusk Till Dawn 2 was. 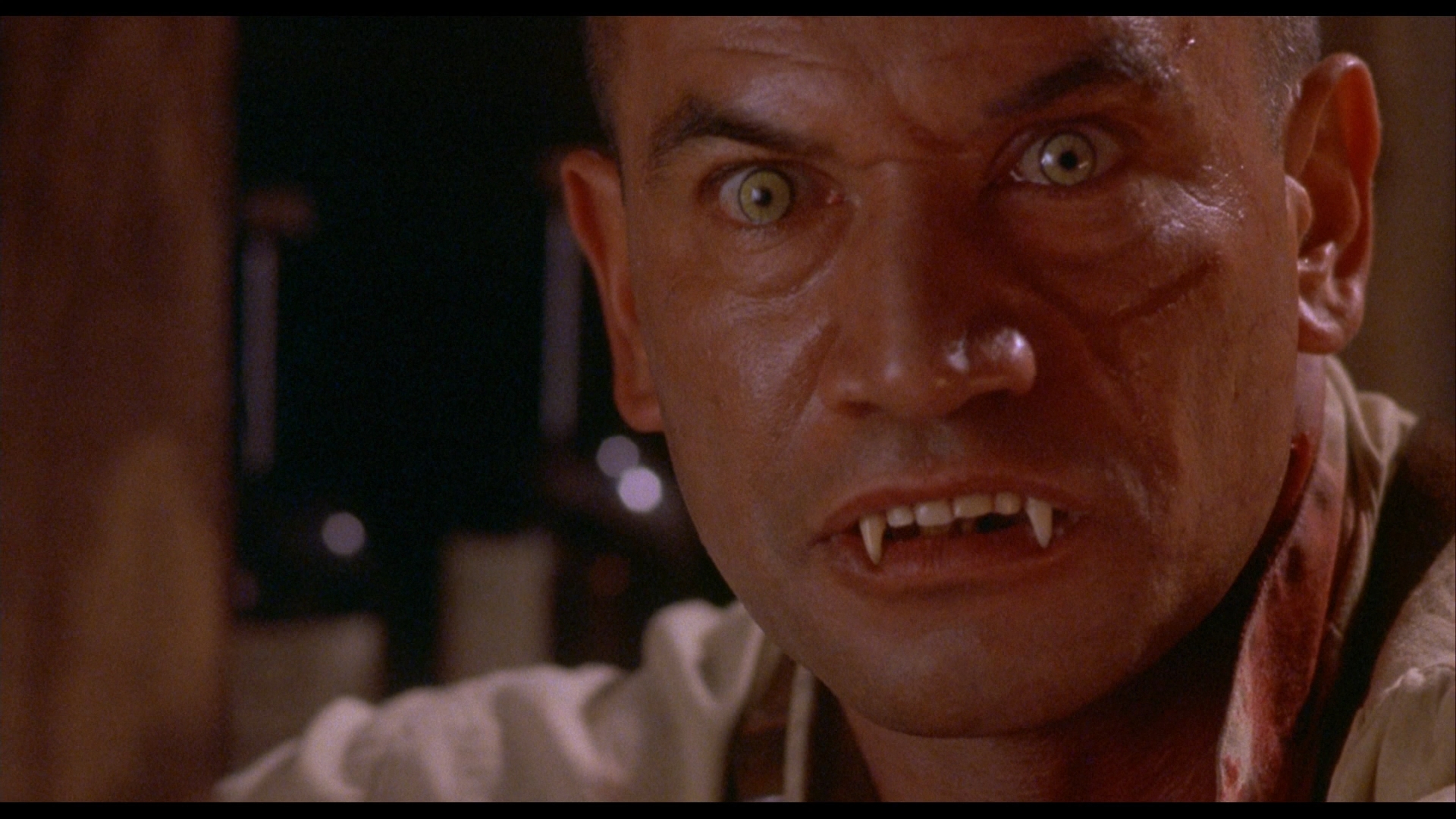 Physical make-up effects are great. No, that’s not a grizzled old man speaking who thinks things were “better back then,” but coming someone who just watched From Dusk Till Dawn 3. See, the CG effects here were rendered at a low resolution to save money, and that’s not in the range of say, 720p. No, not even 480. Say something like the Super Nintendo would find appallingly low. When they creep into the image, either it’s smoothed over or left alone, leaving an outrageous amount of blocky pixels to cascade across the frame. It’s quite funny, and neither solution to hide the budgetary constraint works.

That’s no fault of Echo Bridge, just a distribution company who never thought we’d make it past DVD or VHS where that material would be obvious. Don’t take that the wrong way. Echo Bridge crams this film onto a single disc with three others and the resulting compression is unmistakable. Grain structures are broken down into noise, or block out the background so the ensuing banding can be made apparent.

Most of the source photography can kindly be called soft, but other adjectives are on stand by for more egregious faults. Close-ups produce enough high-fidelity detail to scrape by, while the location footage is left to rot. The desert is looking awfully bland these days. Everything is fitted with a rather severe case of black crush too, so that won’t help matters.

Until everyone reaches the bar, this film is coated with gaudy reds and oranges. The film stock could be physically backed by fire it’s so heavy. Oddly, certain shots keep the dense blue of the sky, which makes for a relief, and also a weird contrast. If it’s not blue, it’s being turned yellow like most of the whites, dimming the entire piece into a flat, unappealing mess. Primaries only spring once into the “safety” of the bar, reds especially killer… pun wholeheartedly intended.

Funny thing about this DTS-HD 5.1 mix: it’s wrong. The opening scene is an execution by firing squad, and when the guns are cocked, the riflemen are lined up on the right side of the screen. The left rear picks up the sound. At times, it seems as if someone forgot the right rear all together. Even during heavy shoot outs, the left rises out of balance by a couple of decibels. If nothing else, the stereos seem to be working in proper tandem.

About the only thing right is the LFE. It’s used for dramatic footsteps, an accentuation of a forgettable score, or a few shotgun blasts. Bass digs low enough to become prominent, yet not overwhelm other elements.

No extras since there’s undoubtedly no space left on this disc.