A lot of Lethal Weapon 3 feels centered around introducing Renee Russo into the cast, both in terms of keeping the buddy cop series fresh and forcing a romance with Martin Riggs (Mel Gibson). An elaborate, shoehorned shoot-out is designed not to bump up pace -although that is part of it- but to push Murtaugh (Danny Glover) out of the picture. His emotional breakdown after killing a kid is prime time for Gibson and Russo to light their on-screen fires.

Lethal Weapon 3 feels distracted, concerned with everything other than its story. The villain feels like a sidetrack to the film’s bloated elements, not the crux of them. It’s with some audacity the piece shoves in a young, 22-year old rookie cop who might as well enter the field with bullet attracting magnets. It’s a sad excuse to let Riggs reach his emotional breaking point, status quo for the series at this juncture.

The film launched with the tagline, “The magic is back again,” and it’s not wrong. It comes down to what the audience considers the magic, and it’s a safe bet that unanimously, it’s Riggs and Murtaugh. Their relationship is as spicy as ever, slinging one-liners and attracting an impossible level of danger. If the rookie cop is destined to be a bullet sponge, the two leads are ludicrously attracted to California’s worst.

At this point in the series, we’re supposed to take for granted what these two do, and on a daily basis. None of their cases take more than a few days, and in that span, the city has spent millions in clean-up, whether for inanimate objects or bodies. The funeral service business must adore when these guys get going. No offense intended to cops everywhere, but if Lethal Weapon 3 was certified as a job description, none of them would make it to retirement. One shoot-out is enough to place most under psychiatric care, an element that even in this third sequel, Lethal Weapon continues to brush comedically aside.

Minutes is all it takes for this sequel to hit a stride, the headlining duo -despite being homicide- taking one for the bomb squad. Sweaty close-ups inside the primed to blow car and differing personalities creates an instant connection, ushering in another adventure with characters the audience is already attached to. Consider it a reminder with an excuse for an explosion. Stakes continue to be raised with stunt work and a hilarious armored car chase. Never mind the wrong way freeway ride in the back half.

With a 20 years of space between the release and now, it feels that the bolder Lethal Weapon became, the more its grasp slipped. The charm isn’t there as it once was, although not to the point where the franchise allure was lost. Casting hit a gold mine when it landed Glover and Gibson, still enough to carry mediocre material. 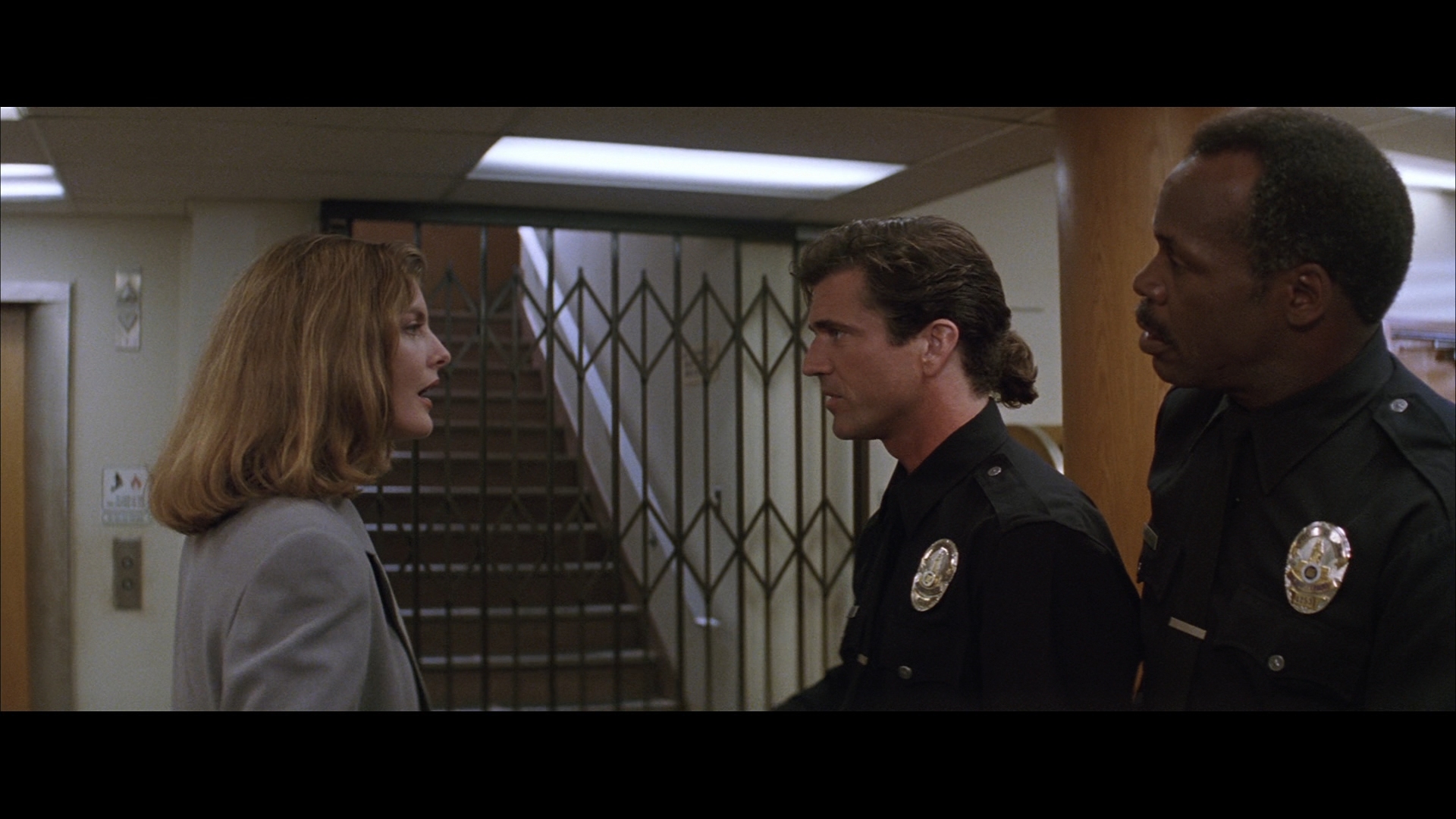 Warner slips a bit with their VC-1 encoding of Lethal Weapon 3. What begins as a dazzling showcase of catalog sharpness suddenly, and somewhat jarringly, hits a snag around a half hour in. Black levels were never the strong suit of prior films, but here, the image is entirely washed out. Cast in gray, there’s no punch or depth offered to film, and stranger yet, there are glimpses of what it could be, even between edits. As Murtaugh holds the kid he shot, close-ups are flattened, while brief glimpses that pan back to bring both actors fully into the frame are fine.

Lost is the zest for color too, the film not only shadowed by gray, but earthy tones that lack the vividness of before. Flesh tones carry their weight in saturation, while the rest feels dusty and faded. A lot of it can be cast back to the under performance of the black levels. Without assistance, even the colors lose their pop.

There are bigger issues to contend with too, although nothing can be leveled onto the compression. The encode does a marvelous job at keeping the grain structure noticeable, but at bay. It’s a background element, and any manipulation performed to minimize it has had little or no effect on the image quality. Fine detail oozes and pours from the frame. Texture is wonderful, and the disc produces an endless series of close-ups that are allowed to showcase this fresh HD material.

What’s not so fresh? Edge enhancement. It’s minimal, but it’s there. The sharpening will reveal itself almost stealthily, not always in the form of halos (although it has those too). Elements in the background will flicker with camera motion even though there’s more than enough resolution to resolve them cleanly. Medium shots have taken a hit too, losing their fidelity to ever so slight manipulation. Oh, and the halos? High contrast edges will reveal themselves to be an origin point. Nothing severe, but a film almost a decade removed from the original should not look worse.

Lethal Weapon 3 was the first to be birthed in an era where audio was finding its stride. Gunshots and action feels direct, not mushed together for the sake of it. Bullets are placed specifically, and the subwoofer is allowed to play. The opening bomb blast generates not only a rumble from the initial explosion, but a continual one as the building comes down. It’s clean, rich, and heavy.

There are a plethora of great moments here, from the hockey game chase in a full stadium to the underground shoot-out in a train station. Bullets reverb and echo as they travel, give their own space in the mix. Separation between channels isn’t modern, still carrying some decades old vintage qualities, but the point is still made.

You can also skip to any of the chase sequences, including that awesome armored car run. They smash and bash, scrape other vehicles, and take advantage of a wide stereo split. It’s wonderful work, and in a balance with the dialogue. A bit of in-car choir-ing is the heart of the scene.

Richard Donner chats up his third time in the director’s seat with a commentary, while three short deleted scenes are meager at best. A music video and two trailers remain.

Note the fifth disc in this collection contains other bonuses. The score only refers to this individual disc.