Tommy Lee Jones offers a monologue near the end of Company Men, walking through an abandoned dock, looking at the rust, tattered support beams, and shattered windows. “We used to build things,” he says. “That was before we got lost in the paperwork.”

Jones is one of the company men, an extended stay executive at a shipping company, now out of a job as the GTX CEO takes home millions in stocks on top of his base salary. Of course, the company had to cut, downsize, and trim what staff they did have to support that.

While many will see Company Men as difficult to relate to, the three eliminated positions, all employees with exorbitant pay grades, Porches, million dollar homes, and staggering lifestyles, there’s a reality to it. Bobby Walker (Ben Affleck) has more than money on the line; he has his pride, his own personal significance, and his purpose to his family. That’s all gone. He’s angry he’s lost his car not because of the physical possession, but because it’s part of what he’s worked for leaving his sight.

In this economy, it’s hard to feel for anyone with millions invested into their home alone struggling to make ends meet, but Company Men crosses boundaries that aren’t meant to be crossed. These are men who felt safe, both from their longtime personal relationships, and the security from their finances. They had power and were making the right decisions, being shot down once their thoughts made it to the top. They’re made to feel unimportant despite their work and in some cases, humble beginnings.

There’s sympathy in the performances, the trials and stresses of their now unemployed lives a burden that can be seen and felt. It’s a film that is about more than the money even if it might not appear that way on the surface level. If anything, Company Men goes out of its way to show more than the financial, more than the power of money, but how important it is to actually build something in this country. 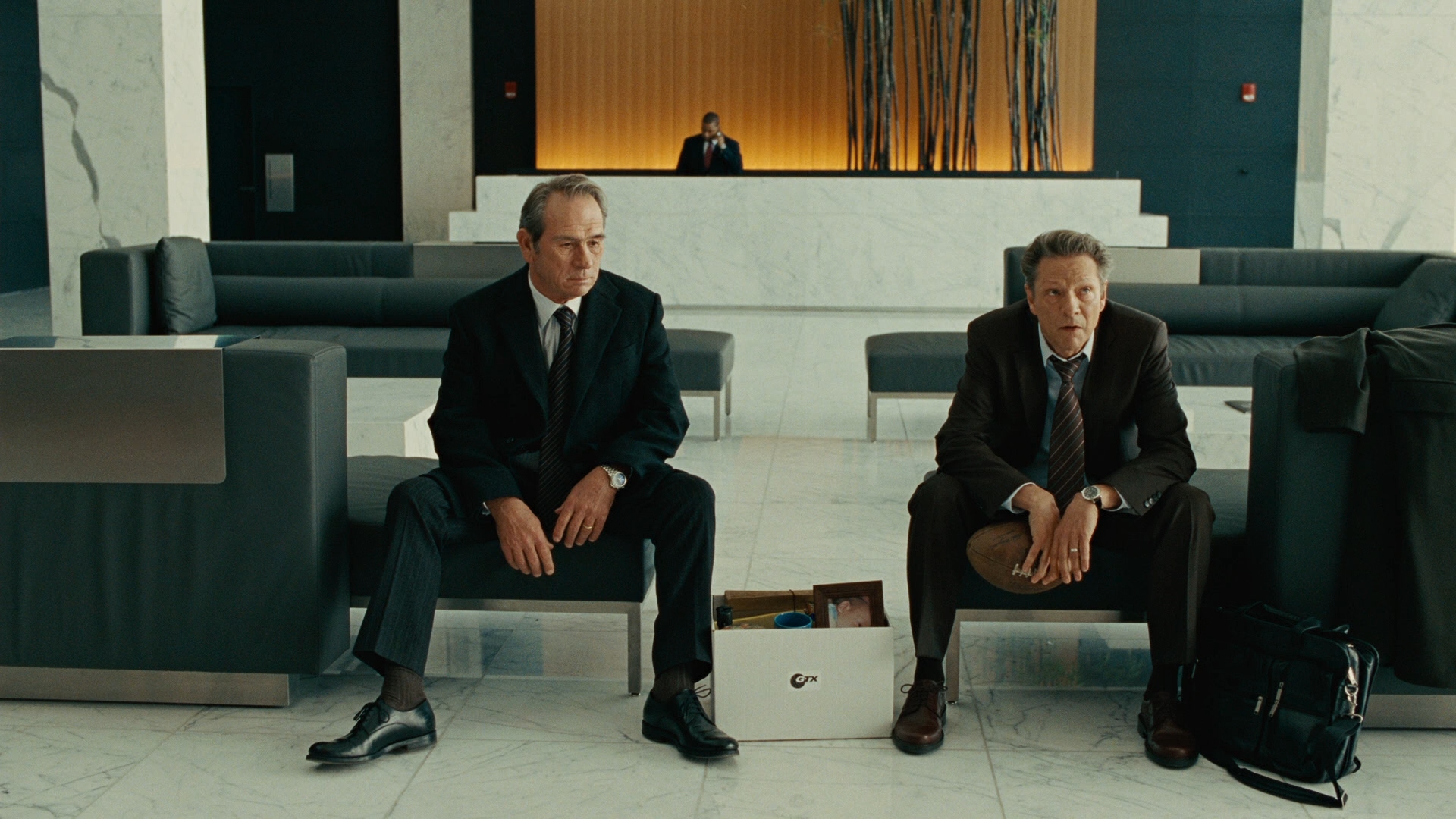 Anchor Bay’s AVC encode for this one is miraculous, a brilliant, clear, and precise appearance that grabs you from the opening frames. The photography of these lavish homes is portrayed immensely, their lush exteriors brimming with detail, a far cry from the SD footage of various network news stations that sat behind the first credits rolls. It’s not just the difference in quality either, but an immediate response to the fullness of these images.

Company Men is given a crystalline sharpness, ever frame impossibly refined and crisp. It comes as a minor cost, some nominal halos around high contrast edges at its worst, while reaping all of the benefits. Facial detail is spectacular at every range, the business suits worn by most of these corporate-driven characters producing the finest of stitching. Even some tattering becomes distinct as their jobless streaks grow. Environments are splendid, from the wide array of pens and stacks of paper to various décor that gives each a distinct vibe.

A natural, pleasing color palette flushes flesh tones ever so slightly, leaving the rest of movie to relish the chance to appear with such intensity. Wood desks have a tremendous richness, trees are vivid, and the smattering of rusted factories producing deep, saturated reds, oranges, and browns. Black levels are calibrated to perfection, sitting next to a bright, glossy contrast that provides the perfect accompaniment. The film looks alive and full of energy even if the characters are drowning themselves in alcohol at a bar.

The film stock produces a minimalist veneer of grain for the encode to handle, and it does so as expected. It maintains total transparency to the film stock. It’s hard to fault Company Men’s transfer for much, digging deeper only producing a few brief scenes of focal softness, the type that resolve themselves within the shot. There’s is nothing here to be offended by, a simply brilliant, masterful digital transition for a worthy film.

Company Men’s audio doesn’t live up to the video presentation, odd for a film that only needs to concentrate on dialogue end up this inconsistent. There are a number of conversations that turn south, one at 16:10 between Kevin Costner and Affleck that sounds like someone is shuffling papers near the boom mic. There are multiple bits of chatter that end up the same, exterior noise intruding not only on the general fidelity, but the ability to hear the lines. While this mathematically come out to 10% of the film, it’s crucial here given the dialogue-driven nature.

The piece is otherwise subdued, the only spark coming from a fairly boisterous piece of music that kicks up as Affleck heads out to the driving range. The subwoofer seems to relish the chance to show itself and provide a hefty presence for about 30 seconds. Surrounds remain flat or completely underutilized throughout, the score cleanly reproduced in the fronts with little rear effect. Offices, with phones ringing and employee chatter, never reach out from their comfy stereo confines.

Extras here are sadly brief, a commentary from writer/director John Wells the highlight. An alternate ending contains a couple of changes, separated from the six deleted scenes that run 13-minutes. Making the Company Men is scarcely better than a general studio talking head piece.