In all the years of holiday films, one would think every concept has been explored. Family dysfunction, romance, John Candy and Steve Martin, BB guns, ghosts of Christmas past, and George Bailey takes care of everything… or so you would think. Leave it to Tim Burton to take the Christmas holiday and do something with it no one had ever seen.

As a stop motion fanboy, it is hard not to notice how truly remarkable Nightmare Before Christmas looks. It’s staggering how many of these shots were pulled off, even with modern technology adapted to fit this disappearing film art form. Miniature work is stunning, and the fluidity of every frame is a marvel to look at.

On top of that, there are some amazing character designs, truly unique in the annals of film itself. The Mayor’s swiveling head, Sally’s stitched together design, and Dr. Finklestein’s removable skull are all admirable creations. While the film carries a PG rating, it’s hard to imagine younger children grabbing onto this one as a favorite, especially after seeing Santa as a morbidly obese man being chased by a boogieman.

Amazingly, even with its dark undertones, the heart of the story is a message about being unselfish. Jack Skellington is a fantastic lead and his supporting cast is admirable. His goal of bringing Christmas cheer to muddy, gray Halloween Town quickly goes south entirely of his own doing. It’s a classic story, and one that will surely live on as a holiday classic. Then there is the music, handled by Danny Elfman. It’s impossibly catchy, and it’s a shame it didn’t gain any Oscar nods.

Nightmare works on every level, with the exception of being a kids film. It’s a remarkable technical achievement, a wonderful musical, and fine piece of original holiday filmmaking. Which holiday the film is about is debatable (there’s far more Halloween than Christmas here), but it’s a classic of the genre nonetheless. 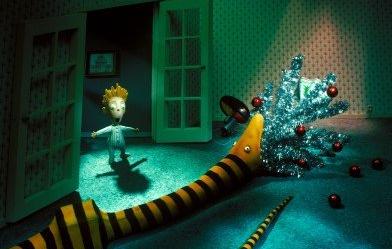 Nightmare comes to Blu-ray and DVD after an extended wait for a special edition. The Blu-ray transfer isn’t without its problems, but it’s still stunning at times. The problems are simply edge enhancement and some noticeable artificial processing. Very few frames of the film look “pure,” like they were pulled right off the film itself. That’s not to say this isn’t a sharp, wonderfully detailed transfer. It is. However, it feels like the entire film has had some form of DNR applied, or extensive digital tinkering.

That aside, the first trip into Christmas town is a staggering one. The amount of rich, bold color in the town’s lights and buildings is remarkable. The gloomier Halloween isn’t half the showcase this is. Although not a flaw, the muted gray scenes are not notable for their detail, while Christmas town has it all. Aside from the applied flaws, this is the way to see the film.

Enveloping is the easiest way to describe this 7.1 TrueHD mix. The opening musical number hits the viewer from every angle, both from the music and sound cues. Ghosts fly cleanly through the soundfield. It feels incredibly full and rich, even if the bass seems somewhat muted. Despite that, when the action kicks in later (as Jack is being shot at), it becomes a front-loaded mix. Cannons provide the bass, and not much else. It sounds flat and uninspired when it should be alive with audio.

Extras here are in-depth, if too brief. An interesting pop-up feature lets people see how Disney transforms the Haunted Mansion ride into one based on this film each year. A commentary by Burton, Elfman, and director Henry Selik details all of the challenges the film brought with it. The original poem written by Burton is read by Christopher Lee, assisted with visuals.

Two of Burton’s earlier shorts, Frankenweenie and Vincent, are included. Storyboards for deleted scenes, including a few that were animated, are here. An all too brief making-of is split into six chapters, and runs around 25 minutes. While it’s a great piece, there’s certainly more to discuss here. Loads of art galleries are contained in specific sections (Christmas Town, Halloween, etc.), and round off the disc with a storyboard comparisons and trailers.