Chintzy Brain from Planet Arous doesn’t have much credibility, but the script has fun when deconstructing the American military complex.

Numerous fears factor in. There’s the idea of an American scientist being taken over by a hostile foreign power, which in this case is a criminal brain. John Agar is a gem as the alien-controlled nuclear scientist Steve March, manically laughing as he holds the world hostage through radioactive fears. March turns into a sexual addict, attempting to rape his fiance, rape not the fear so much as the breach of puritanical beliefs. Pre-marital sex in 1957? Terrifying.

Brain from Planet Arous can’t be taken at face value

Then, March’s ability to cause a blast equal to the A-bomb merely by looking at an object. Brain from Planet Arous’ greatest terror is the military’s uselessness against this threat, a threat the US employed themselves to end World War II. Schlock or not, and fitted to a genre formula aside, Brain from Planet Arous doesn’t only concern itself with nuclear war so much as the army’s inability to do anything to stop it. That’s unique.

The heroes become average citizens, and even more unique, it’s the sole woman in the cast – Joyce Meadows – who finds a way to save Earth. For much of Brain from Planet Arous, she makes lunch. Or, she’s told to look away when there’s a body; women in the ’50s couldn’t handle such things, yet there’s some effort at making the star’s on-screen wife capable, a sign (however small) that society was beginning to turn away from stock domesticity.

Brain from Planet Arous struggles to find any thrills. Barely over an hour, chunks of screen time deal in sheer boredom. Yet it’s distinct and decidedly intelligent about slipping personal politics into the screenplay. It’s a pacifist affair at a time when monster cinema became about new ways to deal with greater radioactive threats. Here, there’s no option other than waiting, and government brass can only sit idle as the alien Gor plots a global takeover. In true Brain from Planet Arous fashion, the climactic battle is woeful, quick, and cheap, akin to an afterthought. However, it does fit into the theme of everyday people standing up for their country, defying outside influences, and performing their nationalist duties.

Clumsily executed and often high camp, Brain from Planet Arous can’t be taken at face value, but writing off the slickly delivered message is to do this clunker a total disservice. 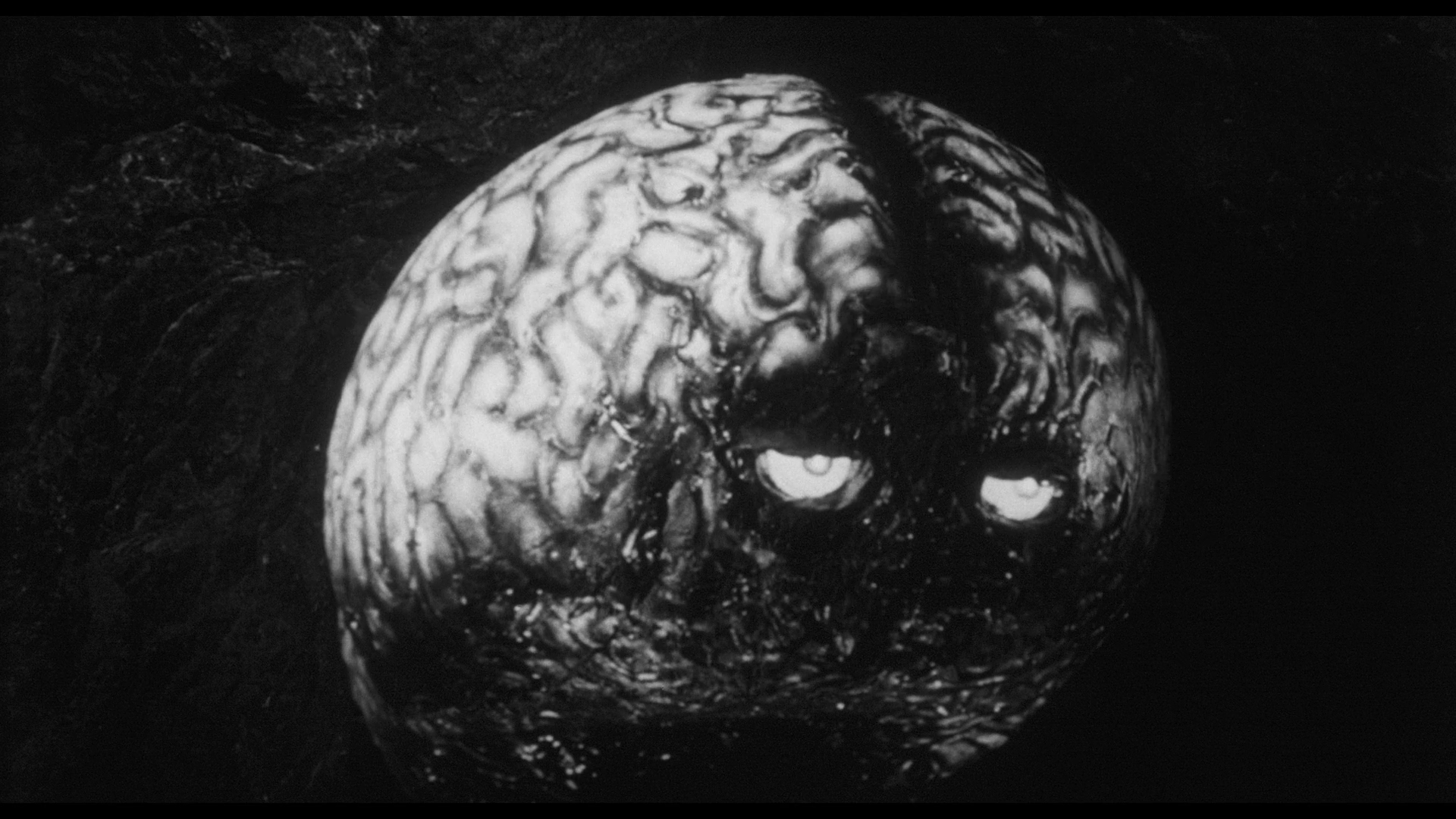 The print itself shows the occasional vertical scratch. Restoration work keeps these under control or minimized typically. A stray bit of dust isn’t concerning. A dropped frame now and then thankfully doesn’t cause any audio skips.

Quality DTS-HD mono gives the dialog a precise quality unusual for something this aged and cheap. Other than messy echoes inside caves, Brain from Planet Arous performs better than expectations. Likewise, the score hits high peaks from treble minus any distortion, which is impressive.

The always essential Tom Weaver is joined by guests for this commentary, including star Joyce Meadows. Meadows also introduces the film in an 11-minute piece that hilariously becomes a sequel; Meadows seems darling. Then, two featurettes focus on director Nathan Juran, one that lasts 11-minutes, the other 14-minutes. Film Detective also includes a widescreen and full frame version of the film; 1.85:1 was the original aspect ratio.

The Brain from Planet Arous

Nuclear anxieties, the red scare invasion, and spicy sexuality give The Brain from Planet Arous a better-than-average reputation for no-budget ’50s sci-fi.