The way to escape infinite poverty, where dinner is cabbage water every night, is to buy stuff. Or, that’s what Willy Wonka says. In this story’s wild surrealism, buying a chocolate bar from a public enigma (akin to Howard Hughes or Elon Musk) is the out poor kids to realize their dreams.

Like the best Grimm’s fables, Willy Wonka’s sadism is a morbid delight, teaching extreme lessons on moderation, spoiled kids, gluttony, and self-control, like a seven deadly sins for preteens. It’s unusually British too, at least for a production that so easily penetrated into American culture. Gene Wilder has that effect on people.

The kids invited to Wonka’s death trap factory are purposeful exaggerations. Kids needs to know right and wrong no matter their age, and as such, the personalities reach for an audience as if live in the room. Also, to pacify the parents when Veruca Salt is sent to the furnace for her behavior, the tantrum caricatures elicit more of a smile – certainly so with regards to Wilder’s ability to give Wonka an incredible indifference to the danger.

Simple as it appears, Willy Wonka finds curious depth, the difference compared to standard children’s fare, now or in the early ‘70s. At times existing in a drug-induced haze, the world is entirely imagined by eight-year-olds. Only their natural naivety can concoct the idea of evening news stretching a candy king’s promotion into a nightly story, or the specific characters within this plot.

Yet, it’s deviously shrewd in a warped way, refusing to dismiss inequality by showing rows of workers unwrapping chocolate bars by the hundreds as Charlie can only afford one. Willy Wonka isn’t cruel, so much as it’s capable of distilling our reality in a wholly unreal spectacle.

Does Willy Wonka inspire? Maybe, in its demented methodology. Charlie’s a good kid despite his circumstances, and as such, is given metaphorical keys to the kingdom. It’s sensible to think Charlie won his golden ticket because he deserved one. His selflessness in keeping his family fed, his want to give Grandpa Joe tobacco, and true excitement – not just self-serving fame – when arriving at the factory makes a character who is charmingly sweet in a world that’s gone wholly dark.

But being honest, no one is making it past the chocolate river without a drink. 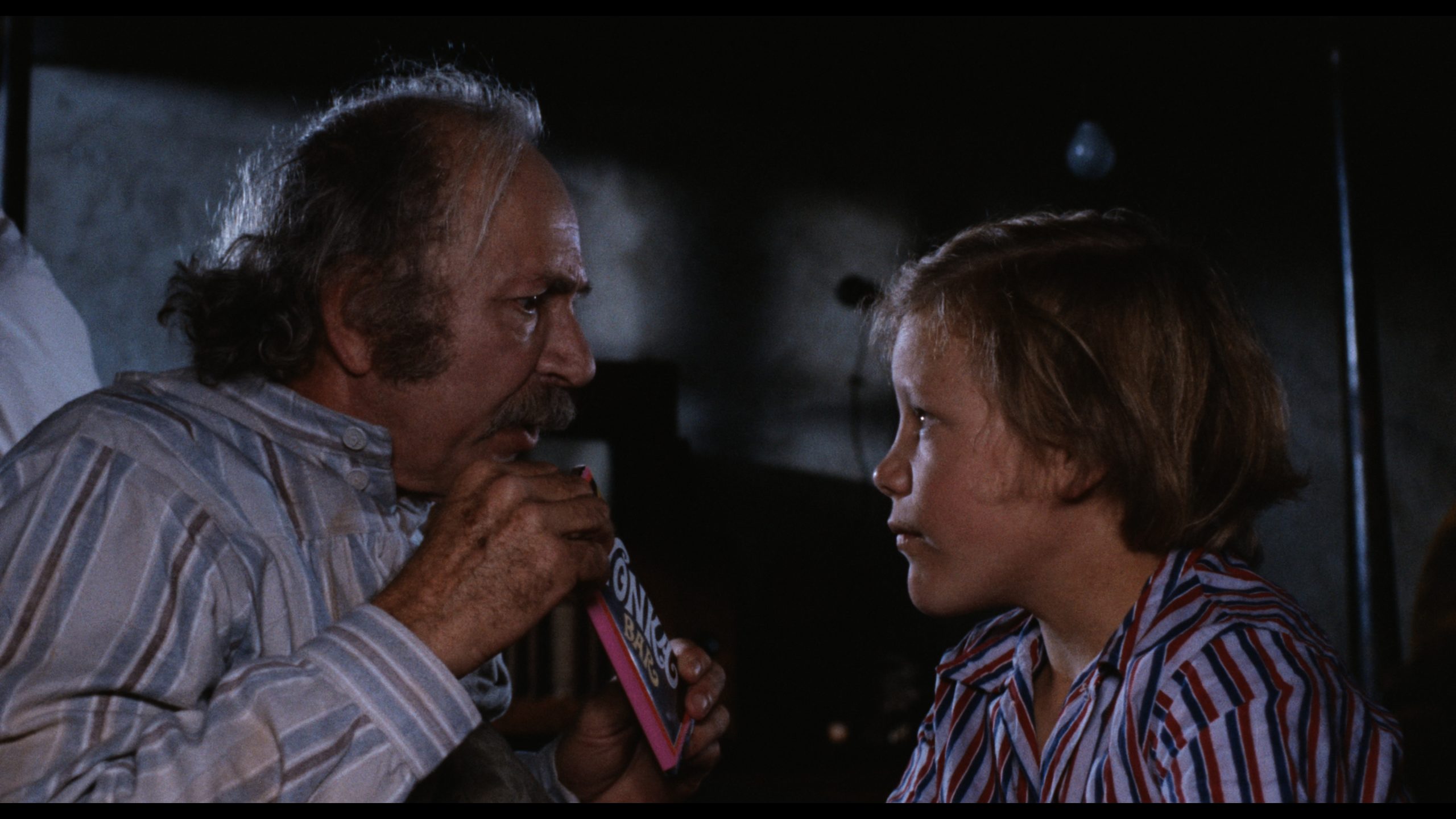 To address the controversy regarding this release, it’s not that Willy Wonka’s framing is zoomed in so much as it was always zoomed out. This UHD release represents the intended aspect ratio, which yes, does crop some information compared to precious releases. Is that a flaw? No.

The rest looks fine if unspectacular. Warner’s master shows enough resolution to justify this release. Gains over the Blu-ray include better refined detail and additional visible texture. However, the jump is fairly marginal, likely a reasonable limitation of the source film stock. Cinematography does veer to the softer side. Luckily, Warner’s encode manages the precise grain structure cleanly.

HDR zest is fair, bringing some glitter to the contrast, adding weight to the highlights, and overall bettering dimensionality. In this era/format, black levels don’t quite have the modern kick. Shadows appear drier than bolder presentations, if still enough to show added energy compared to the SDR release.

Disappointments noted, the greatest quality comes by way of the deep color pass. It’s sensational. Inside Wonka’s factory, the sheer plethora and variety are marvelous. There’s a definite classic film quality to these hues, similar to the glow in Wizard of Oz (if not with the same overwhelming pop as that disc). Even in the drearier first act, flesh tones carry a desirable accuracy, as do the cold concrete buildings.

The Blu-ray/UHD holds a commentary track with the kids (or adults now actually). The rest is on the Blu-ray. Pure Imagination is a wonderful retrospective and making-of in one, a half hour of insight and anecdotes. A featurette from 1972 is forever preserved here with plentiful on-set footage.

For the kids, there’s a four-part sing-a-long, as if anyone needs help remembering these tunes.

Willy Wonka and the Chocolate Factory

Surreal, bizarre, and utterly enchanting, Willy Wonka bounces all over the spectrum in delivering a multitude of messages in the vein of Grimm.