Of Dick Miller, NASA, and Fanta

Explorers is an ‘80s movie. Duh. But, not for its technology or style, rather being a pure sci-fi/fantasy made by a director trying to recapture the freedom of their 1950s youth. Spielberg did it with E.T., Richard Donner with The Goonies, and Joe Dante with Explorers (and in Dante’s case, a few others).

Movies like this, focused on a few geeky kids on a wild, surreal adventure, tapped into the decade almost flawlessly. Explorers and its ilk act like generational bridges, where the monster kids from the ‘50s transplant themselves into the early computing era. Ben Crandall (Ethan Hawke) is a sci-fi obsessed grade schooler, enamored with Ray Harryhausen films and alien invasion epics like War of the Worlds. Yet oddly, he doesn’t pick up on the fact that his experience retreads This Island Earth in its entirety. Maybe Ben didn’t see that one.

NASA’s shuttle era plays into this script, making space exploration thrilling again after people stopped tuning in to moon landings in the previous decade. The excitement transcends Explorers’ goofiness as intellectual Wolfgang (River Phoenix) decodes alien messages sent through dreams. Lucky then his Apple II is up for it.

Notably pulled from Joe Dante’s grasp before release, the third act was never finished. That’s clear now. While hammy and kooky to appeal to the demographic, there’s a genuine sense of wonder in the first hour. Computers changed how kids grew up. TV did too. Explorers is also careful in depicting the changing American middle class. This isn’t a glossy film, but it’s purposeful and relatable. The messiness and the honesty in showing Darren’s (Jason Presson) choice not to go home to his dad pokes at a specific social change.

Then the kids fly away to an alien spaceship, meeting creatures who absorbed decades of television (luckily in English) and witnessed what our species is entirely through entertainment – swindling game show hosts, late night comics, and man-versus-monster movies. It’s here where the focus becomes mortally unwound, sinking Explorers by focusing on cheesy antics in an attempt to bury the careful anti-war theme. Part of it works; the kids learn they share the same problems as the alien creatures, namely parents berating their kin. Yet under that is an earnest attempt to reach pre-teens about humanity’s proclivity to fight what they don’t understand, and how easy the descent to war is. Instead, Explorers focuses on a saxophone solo. Eww. 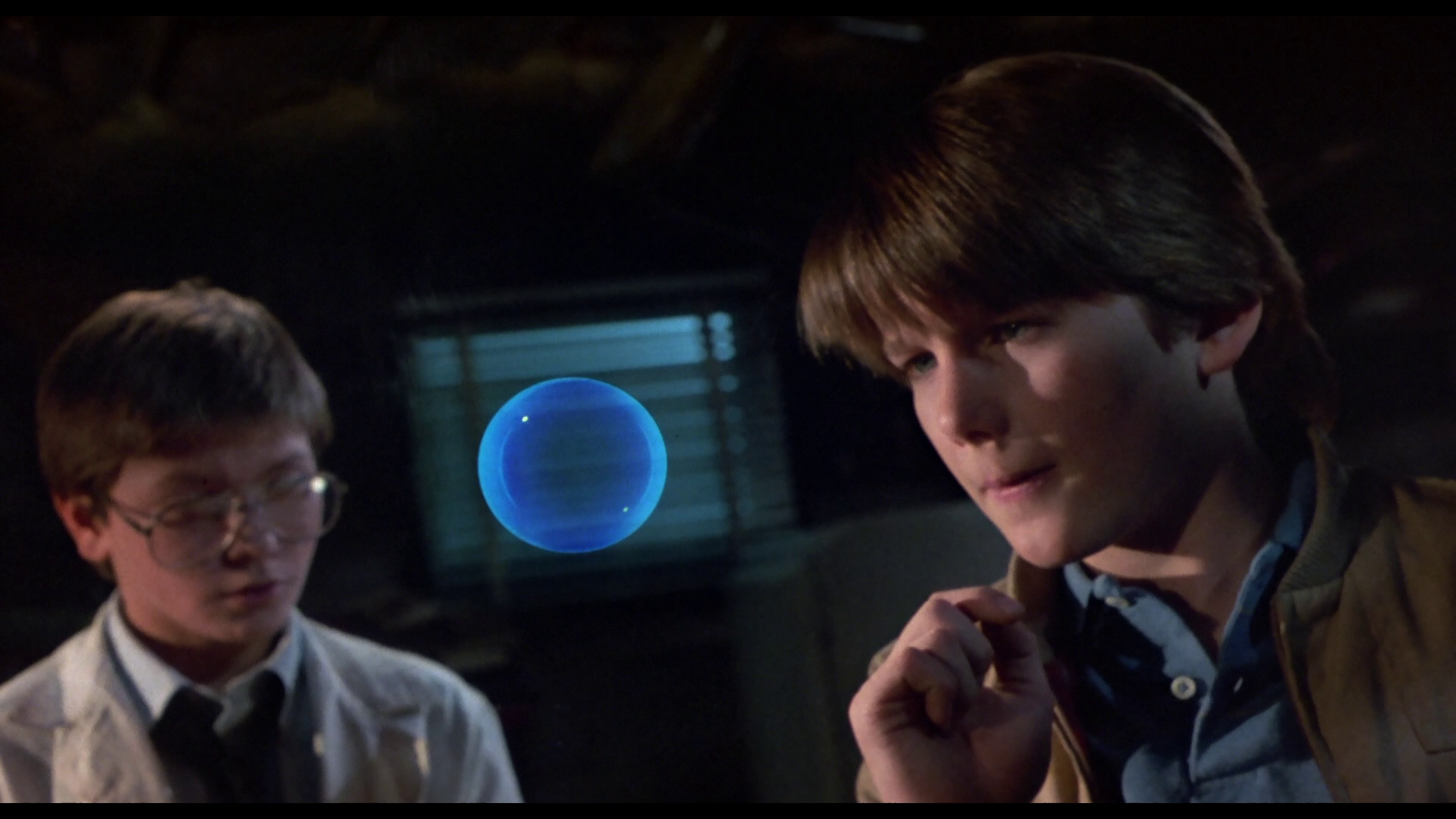 Using an outdated master (the same for both included cuts), Explorers’ Blu-ray isn’t an impressive one sadly. The print shows regular dirt, signaling the need for a clean-up. Whenever the master happened, tools handled some of the work, reducing grain and detail in the process. That leaves Explorers murky and poorly defined. Any haze/smoke only creates additional problems. Encoding looks a little chunky too, unusual for Shout.

Pale color saturation lacks pop, faded over time. To call the primaries bland is to understate their dullness. Other than some effects (and the CG dreams), the source film elements take a beating from age.

Contrast holds together better, certainly the most vibrant thing in the transfer. Where black levels fall to merely average, brightness adds a spark. That helps give Explorers marginal energy, and it needs it.

Credit to the team who designed this 5.1 track. Stereo is available too, but the surround mix offers natural touches a plenty. A rich, full score belies its age in fidelity terms. Plus, the soundstage fills up, giving the music bombast.

Action splits the available channels, the orb zipping around the house. Small cues like a woodpecker in the forest or a radio playing in a different room run into the rears or stereos organically. Inside the alien ship, voices echo, pinging from the metal interior; all of those scenes sound great. Low-end support runs on the rougher side, the only thing indicating mid-80s elements.

Oddly, while this set is two discs, a theatrical and home video cut, both contain the exact same bonuses. A fantastic hour long documentary/retrospective involves a number of people, Joe Dante included. Then, a half hour of deleted scenes follow (pulled from a beta found in Joe Dante’s garage), with an option to watch them alongside a Dante commentary. Interviews with cinematographer John Hora (3:46) and editor Tina Hirsch (6:10) come next – and last.

An endearing adventure, Explorers holds on for the first acts, but loses its way in an admittedly unfinished third.

The 15 unaltered images below represent the Blu-ray. For an additional 48 Explorers screenshots, early access to all screens (plus the 120,000+ already in our library), 120 exclusive 4K UHD reviews, and more, subscribe on Patreon.