In the ‘80s, Hong Kong underwent an economic boom. That’s visible in Police Story. In the opening scene, a hill of tin squatter homes is backed by rising apartments. High level heroin trade exploits the desperate, with Jackie Chan leading a car through the poverty-stricken district. Bad Boys II did the same thing nearly two decades later, but Police Story’s chaos doesn’t carry any Hollywood gloss; it feels live, reckless, and harrowing. That goes for all of Chan’s wily brawling too.

Police Story is a movie about those left behind – a rich-get-richer story where the blue collar, average policeman (Chan) risk it all yet struggle financially. Crooks lawyer their way through the system. A courtroom scene see Chan outwitted by a smarmy lawyer, losing the case on ludicrous technicalities, rendering Chan’s efforts moot. A cop’s lawyers don’t cost as much as the heroin dealers.

Pressure mounts as Police Story moves. It’s slow in the middle acts, waiting for its tension to pop. For a while, it’s a goofy, friendly film about Chan balancing work and a relationship (a rather embarrassingly written hapless girlfriend role for Maggie Cheung). Police Story bides its time.

There’s definite western influence. Leroy Neiman posters hang in Chan’s apartment. The court system was decidedly British even as the UK restructured a Nationality Act to change Hong Kong’s citizenship. Chan wants independence, away from this system and away from the richer capitalist influences, but accepts the circumstances until a breaking point.

Set in a shopping mall, the climax is a dazzling destruction of store displays. If there’s a record, it’s the amount of shattering glass. Men fall through marketing displays, bust up expensive jewelry counters, and send a motorcycle to ruin. Despite the precision beauty of Hong Kong martial arts choreography, the setting looks and feels entirely western. Destroying it is Chan’s release.

Pent-up anger is unleashed. Where earlier fights contain Chan’s trademark humor and Buster Keaton-like genius, that’s evaporated in this finale. His face exhibits pure anger, trying to keep a nation’s culture intact, and willing to kill himself for it – and Chan nearly did with an iconic pole slide that ranks in the top five of his stunts.

After the slide, Chan wrangles the villain (Yuen Chor), holding a glass shard to the throat. Chan screams about legal failures that let this man free. There’s a choice – end the crime spree with an arterial spray or take a take a chance in court. Reason wins in a comic (if no less painful) shopping cart kick, running the gamut of emotion for an easily underappreciated character arc, teetering on the edge before trusting the system will be fixed. 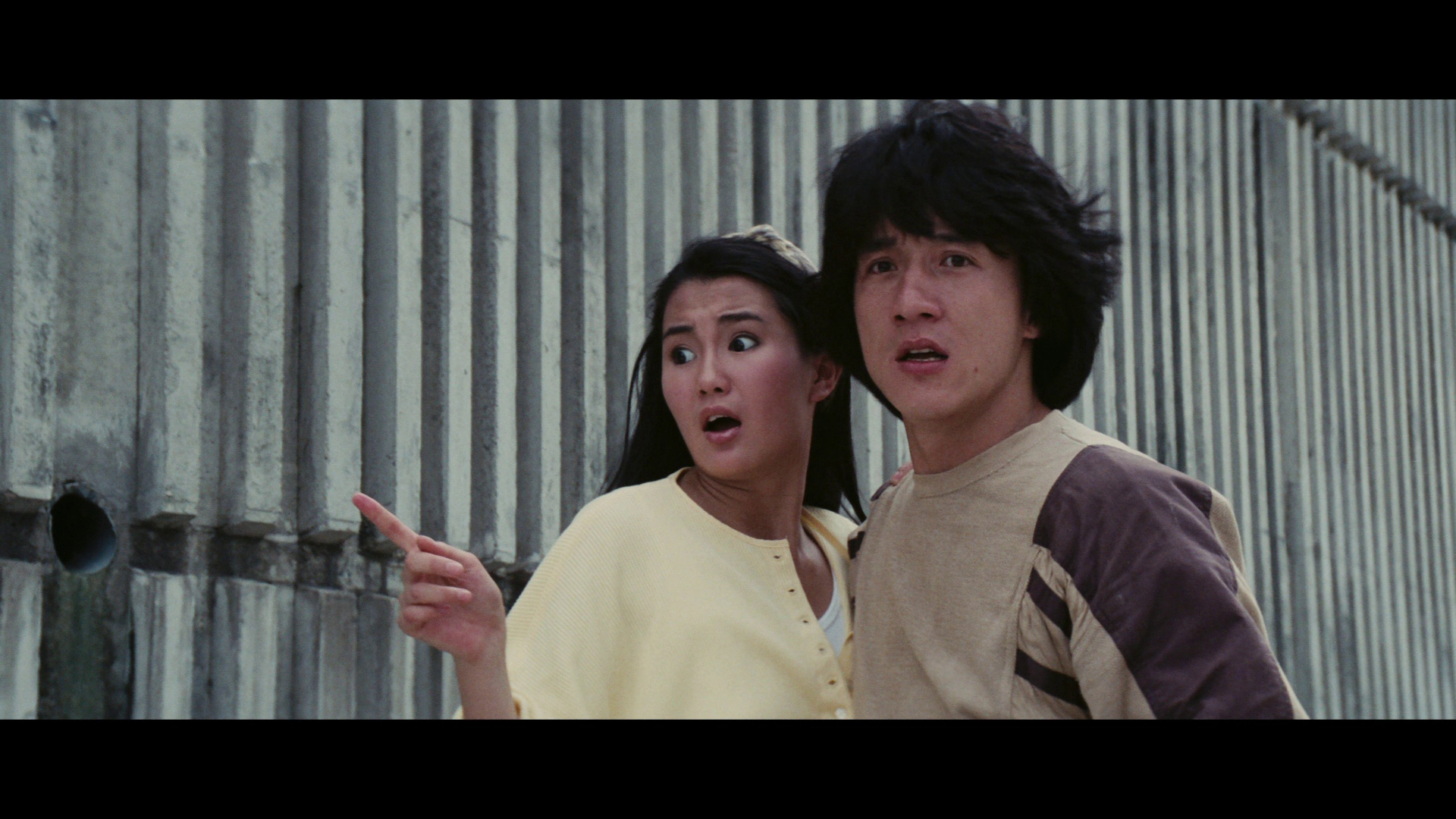 Criterion debuts a new 4K scan with this release, something long overdue for all of Chan’s golden age work given its Blu-ray treatment to date. It’s instantly obvious how sensational this work is. The camera pans over the shantytown and the immensity of the resolution defines homes as much as grass. It’s incredible.

In close is much the same. Perfect, even. Facial definition comes in, full, rich, and pure. Decidedly ‘80s interior design loses nothing, with various décor and textures noted.

Included with Police Story 2, Police Story earns its own separate disc in this double pack, allowing grain to breathe via high bitrates. The only issue is cheaper Hong Kong film stock, introducing various inconsistencies including grain spikes and general softness. Some darker scenes turn muddy too, lacking in depth. That’s not on this transfer.

In fact, contrast is so embolden as to look new. With sunlight drenching exterior shots, intensity jumps to extreme levels. Still in control, but reaching a superior limit without losing detail. Same goes for black levels in these circumstances.

An even bigger boost is given to color, bringing out marvelous primaries and overall saturation. Brigitte Lin wears a number of colorful outfits, hopping from the screen with new density. Apartment decorations pop too, with deep, bold hues scattered around to create an attractive palette.

An English dub and two Catonese tracks appear on the disc. The original mono Catonese is flawlessly restored and clean. There’s no doubting how impressive the 5.1 upmix is however, doubly so for the source. This DTS-HD track breathes life into the proceedings, organic in pushing material around the soundstage.

Car chases pan around the field. Glass debris drops into the surrounds. Gunfire makes its way through each speaker. City ambiance enriches everything, and partway through, a dog barking in the left rear makes a convincing case for its presence.

The only concern is the slightly hollow dialog; that sounds artificially raised. Not so in the pure mono track.

My Stunts came to be in the ‘90s, finally seeing release Stateside. It’s an outstanding documentary looking at the stunt process, running a little over an hour. Superfan Edgar Wright is featured in a video interview with Chan (13:25) and podcast (36:02). A 16-minute discussion called Becoming Jackie offers insight into Chan’s methods from the man himself.

A Hong Kong TV show reunites the cast, filmed in 2017, running 12-minutes. Finally, there’s an interview from sometime unspecified in the ‘90s that runs 20-minutes, discussing Police Story and others.

Jackie Chan risks it all in the original Police Story, telling a fine story of blue collar angst with careful humor and mesmerizing stunts.

The 15 unaltered images below represent the Blu-ray. For an additional 33 Police Story screenshots, early access to all screens (plus the 20,000+ already in our library), 75+ exclusive 4K UHD reviews, and more, support us on Patreon.