As with the first Bad Boys, this a glamorizing affair. Will Smith and Martin Lawrence amp up their act. They trade barbs and one-liners, giving Bad Boys II a hard “R” in the process. When not speaking, they hold or point guns, shooting incalculable amounts of ammunition across a weary 140-minute runtime. Director Michael Bay never grasped the necessity of trimming fat.

Most of the shoot-outs take place in public spaces. After the freeway chase, there’s a stand-off in an outdoor cafe. Haitians fire at police who blindly lob rounds into the fracas. Civilians flee in panic, screams the only sound other than gunfire. No one cares for the safety of innocent lives – Bad Boys II wouldn’t have those nifty slow-mo shots of Will Smith diving with dual pistols, breaking open heads if it needed to care.

There’s an allowance for flash. It’s Hollywood. But the fantasy here is harmful, energetic in its hunt for violence first. Also, Bad Boys II’s casual use of illegal surveillance feels less cool in 2018 than it did immediately post 9/11.

In 2002, Undersecretary of State John Bolton added Cuba to the “Axis of Evil,” a list of countries stated to hold weapons of mass destruction. Bad Boys II takes that to the extreme. It’s a hyper-active, Bush-era, anti-drug crusade, where drugs stand-in for potential mass destruction. The solution? Two Miami cops flying into the country to break down the illegal trade. Along with them, American special forces military who gun down Cuban soldiers, in addition to a myriad of ecstasy traders.

Then, the drug war leads to Lawrence and Smith driving a beefy Hummer through a Cuban Favela. A quick line of dialog states, “This is where the drug dealers live!” but the imagery of a souped up American-made Hummer smashing through an area of third world poverty leaves an uncomfortable mark. But, Axis of Evil and all that, demonizing Southern countries as to not acknowledge their impoverished condition.

That Hummer chase then leads to Guantanamo Bay. “America baby!” shouts Smith, elated at the sight. Again, so near to 9/11 that sequence evoked pride. Now, it’s a relic of Bush-era ignorance. So too is all of Bad Boys II, a partisan spin depicting absolute power and authority on the part of America.

In any logical reality, Miami P.D. smashing through Cuba becomes an unsanctioned international incident. To Bad Boys II, it’s Tuesday. Not all that different to the second Iraq war, to which Bad Boys II draws a comparison. Trying to make an audience laugh through the entire thing seems especially crass. 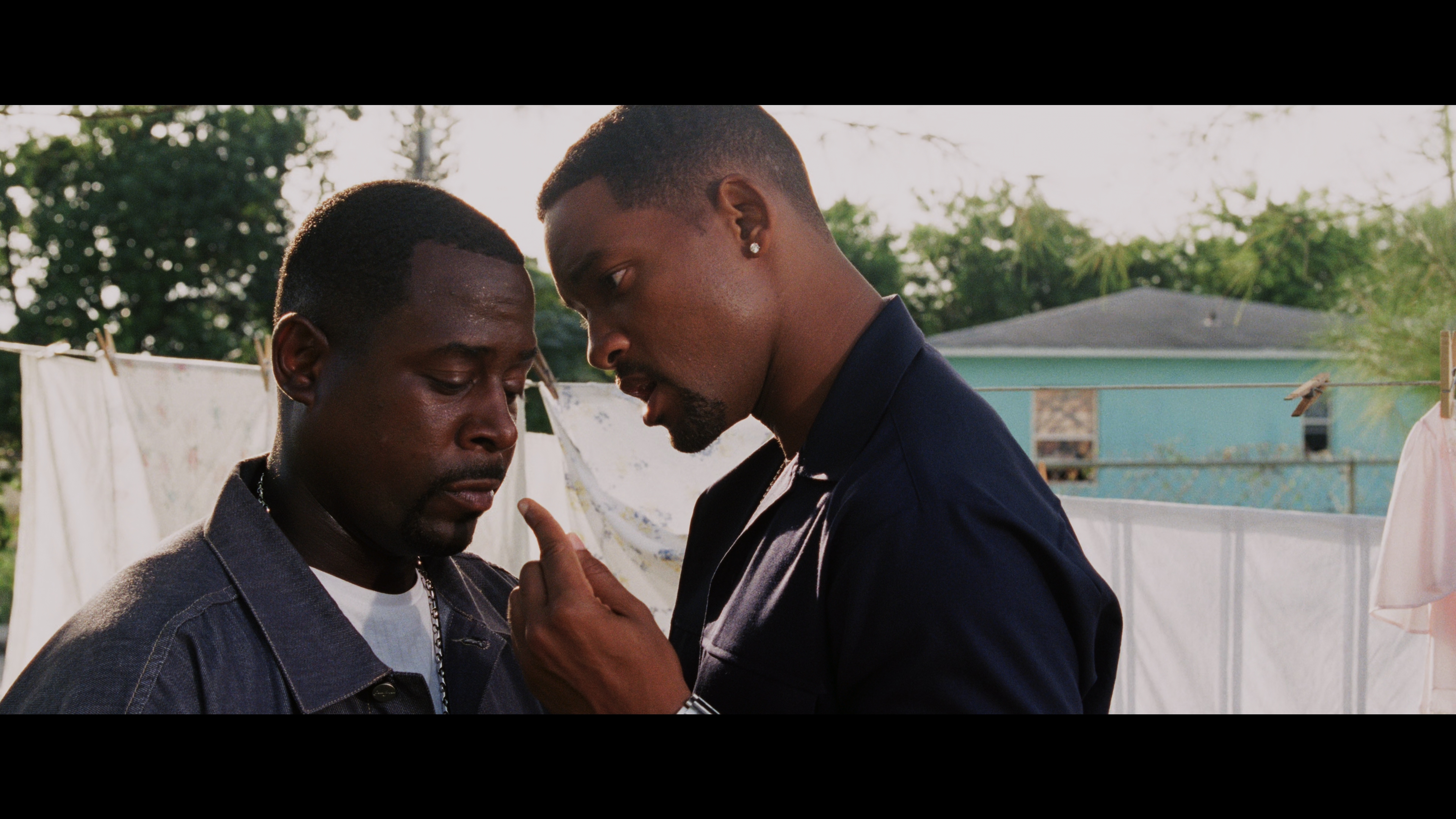 Most of Bad Boys II looks sensational. Another case of Sony excellence, sharpness remains high. Close-ups rank up alongside the elite. Texture and resolution meet in a beautiful showcase of clarity. Aerials of Miami display the city’s full vibrancy. At times, this resolution hurts Bad Boys II. Watch the pool ripping open at the end; that’s not Will Smith on the raft, and the 4K material shows the stuntman in full.

An excess of color props up blues with outstanding density. Bay doesn’t quite reach his super orange era yet, leaving flesh tones natural. Other primaries sing when given the chance with massive blasts of red and green. Once into Cuba, landscapes deliver powerful greenery.

However, certain elements of Bad Boys II suffer, as if shot with a different stock. This applies primarily to action scenes. A lot of the freeway chase, for example, raises the grain structure. Visible halos indicate sharpening at the source, thus elevating grain. Rather than the precisely measured film stock elsewhere, those scenes roughen up the premium sharpness elsewhere. This compromises around 15% of the runtime. Not a lot, but significant.

Remastered into Dolby Atmos, Bad Boys II sonically wears its action. There’s so much going on. Every bullet whips around the soundstage with expert precision. Front channels handle the initial shot, rears the impact. It’s impeccable stuff. A myriad of chase scenes, some with helicopters, some with cars, some with boats, all send audio into the proper channel. This, even as the dizzying camerawork spins around.

This all comes with exceptional LFE support. Mammoth jolts of bass pair with a swell of explosions or collisions. Intensity and range both run high. The sub exhibits superb balance, with heavy blasts for fireballs, to smaller pops for handguns. Shotguns and rocket launchers suitably flare up.

Everything here is on the included Blu-ray; the UHD holds no bonuses. Bad Boys II doesn’t add anything new. This is the same disc as the previous release, although these extras fare well.

A series of 19 production diaries run over an hour, with live set footage intercut with interviews. This is great material, followed by six sections focused on the action. These run a total of 45-minutes, again with numerous clips of raw set footage. A smaller set of stunt featurettes run nine minutes, another on visual effects 18-minutes. Seven deleted scenes and a music video round off these bonuses.

The following six screen shots serve as samples for our Patreon-exclusive set of 42 full 4K screen shots grabbed directly from the UHD: