No Doubt’s charged “I’m Just a Girl” blares when Captain Marvel (Brie Larson) finally overcomes her personal skepticism to take on a group of villains. It’s a little tongue-in-cheek – just a bit. The song concerns breaking the traditional social norms of femininity. Here’s Larson shooting hand lasers, drop kicking, and body slamming a group of alien assassins – all the things her male cohorts in the Marvel-verse enjoyed doing for years. But sure, just a girl.

It’s with a slight irony then that Captain Marvel conforms otherwise. The plate of laser beams, space battles, costumes, and quips doesn’t deviate. As with other late comers in this series (say, Ant-Man and Wasp), Captain Marvel fits like a puzzle piece into the greater arc. A clean-up movie, filling gaps and answering lingering questions. Some needed answers, some didn’t. Captain Marvel provides from a formulaic, nostalgic base too; “I’m Just a Girl” joins Nirvana and TLC on the soundtrack, and Larson smashes through a Blockbuster Video next door to a Radio Shack, because brand sentimentality is unusually strong. 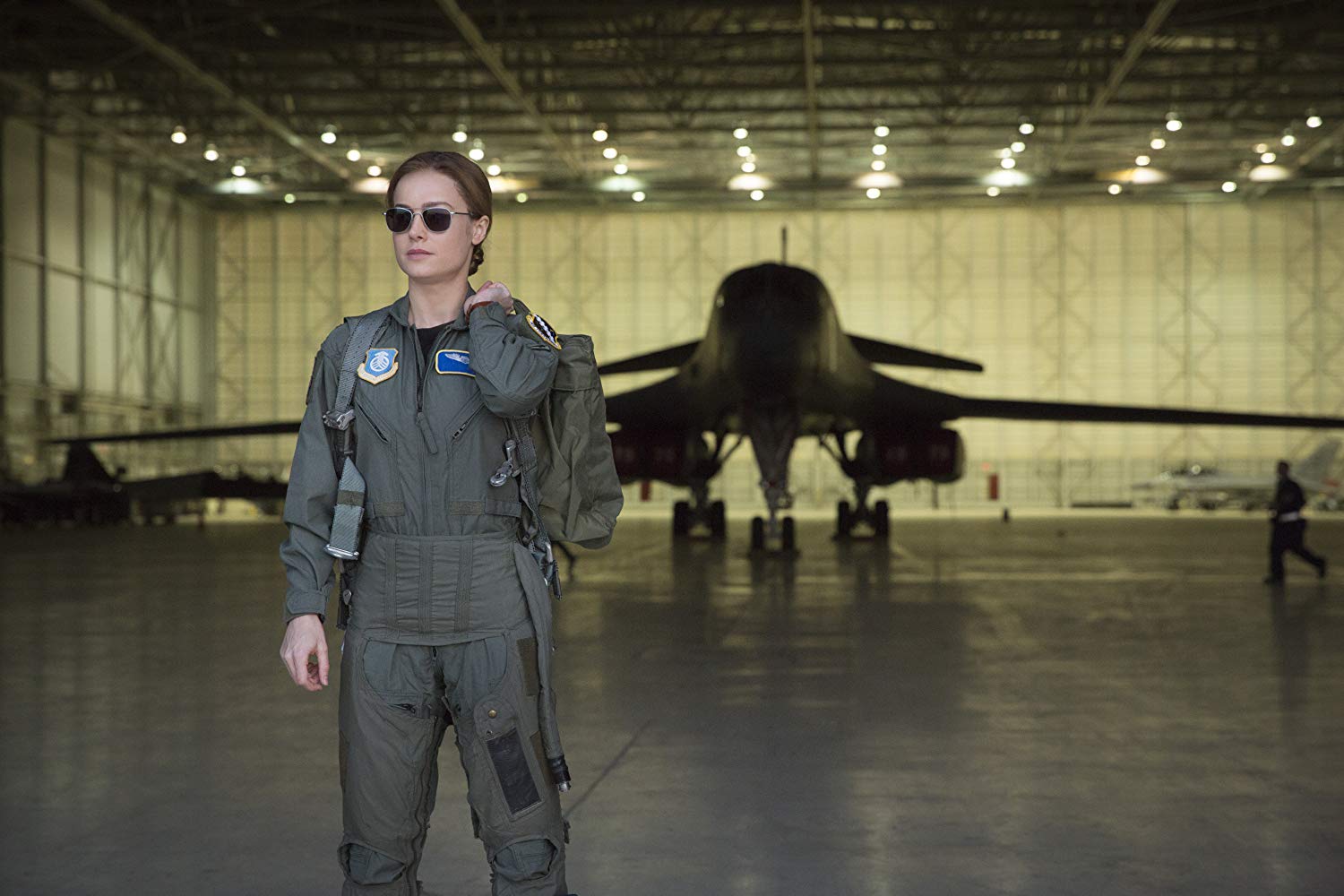 Take that away and Captain Marvel breathes a story of disenfranchised immigrants trying to find a home. The elite rejected them, cast them out to live in poverty. They spend the movie starving. While dishing a tale of women-led superheroes, Marvel once again digs into the current zeitgeist with empathy. Plus explosions. And a cat.

Larson’s Carol Danvers suffers from a generic case of Hollywood amnesia; that’s her struggle. Her story and past matters, but so does what she knows. Fed propaganda and lies, she hates and fights against someone she doesn’t understand. As much as she uncovers about herself, Danvers begins to grasp who the enemy is. Facts matter, so the saying goes. Captain Marvel’s best sequence is a table chat with those non-enemies, where it’s clear political deception hid a race of jovial spirits who fit into this often colorful, sarcastic movie-verse. They belong. If only they were a given a chance sooner.

Before the conclusion, Danvers discovers her colors. Her suit changes via wristpad controls (technology does some wild stuff). When making the selection, she chooses the US Air Force’s palette, becoming this invincible being of the sky, even knocking out a series of missiles aimed at Earth. It’s odd. Where 2014’s Winter Soldier took aim at the perils of government surveillance – in the aftermath of Edward Snowden – Captain Marvel pulls that criticism back. End credits thank the Air Force for their participation. No wonder she dons red, blue, and gold.

This is the origin story of Nick Fury (Samuel L. Jackson) too, the CIA-like agent developing a defense against other-worldly entities, the character not yet disenfranchised by political gamesmanship. As a pair, pro-military Danvers and anti-oversight Fury form a pair of government-smothered characters in a movie (and a series) following a different trail. Captain Marvel pulls its own Civil War, thematically so.

All of this isn’t hidden by the usual superhero swoops, sky dancing, and brawling. Confused overall, but certainly not without energy. The humor and nostalgia distract enough from those failings. Captain Marvel tries to stand out against the prior 20 or so movies doing the same thing. Creative freedom isn’t something the Marvel series is fond of, Captain Marvel the penultimate example. The origin story, part nine or so now, if with enough flair and an overdue spike in femininity.

It’s too late to perform any swerves, so Captain Marvel sticks to a formula with success, if with a confused thematic pulse.