Set at the 1960’s end, Bad Times at the El Royale plays to its period. It’s a story of seven people coming together inadvertently, each likely doomed. Their hotel splits in two. One side rests in the sinful Nevada, the other a progressive California. It’s difficult to fall on the side of right; each character represents a deadly sin.

Bad Times as the El Royale works at any time. One character seeks fame, another money, still another law; each is universal. But, the ‘60s casts a certain shadow. An unscrupulous President Nixon gives speeches on a small television. The immoral Vietnam war echoes through the narrative. A hotel like the El Royale, placed on a literal dividing line and holding these divergent people, will decide the country’s direction.

The morality play is inventive, creative, and smart. Maybe a bit slow in its opening act, but certainly helped by the added development. It all counts in the end, a sensational climax that forces all sides together in one room, debating their past actions while a madmen holds them at gunpoint.

More than writer/director Drew Goddard’s clever genre subversion Cabin in the Woods, Bad Times at the El Royale finds greater purpose. It’s a fine mystery – motivations and truth stay disguised until the end. But when a Vietnam veteran, emotionally wounded by his time spent killing Vietnamese, dies while centered on the line in the hotel’s lobby, Goddard’s smarts show through. There’s room for ambiguity, even in murder, whether state sanctioned or by a hero’s ideal. What’s right isn’t decided by laws.

Most of Bad Times at the El Royale is self-contained. But a handful of scenes ever leave this pseudo purgatory. The few that do reveal tantalizing details into the past, quickly roped into the present as characters wrestle against one another to either atone for or live with their faults. Bad Times at the El Royale is careful to never draw a definitive hero; everyone is a deception at work.

Outside of the religious parallels, Goddard writes a swift story. The ensemble is generous, sharing screen time and expertly played. Their true selves stay hidden until a breaking point, drawing superlative tension. When that tension shatters, it does so brashly, usually with the shock of gunfire. Rare is a thriller in such balance. 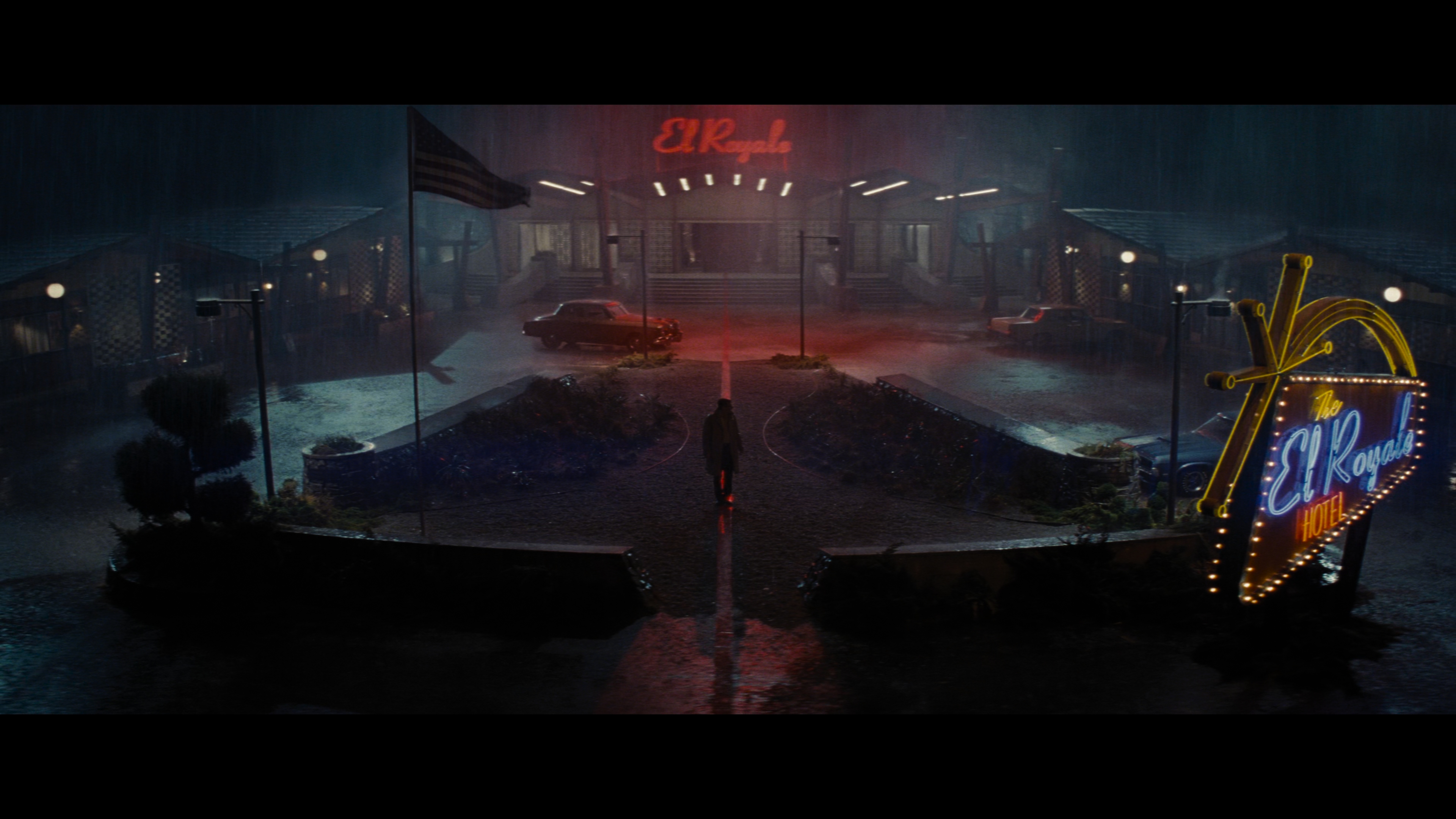 From a 35mm source, a consistent grain structure sits over the image. It’s mild. Other than slight evidence of artifacting during a studio session with Cynthia Erivo, Bad Times at the El Royale exhibits beautiful stability and consistency in its transfer to digital.

Captured with a vintage aesthetic, imagery does run to the softer side. This suits the style, giving things an accurate, plausible sense this came from the ‘60s. Still, detail runs firm. Facial detail jumps forward, and the texture of the motel itself is splendid. From the carpet’s design to the fine lines in the architecture, everything displays more than enough sharpness.

Come for the color too. Density runs high with splashes of primaries. Decorative signage makes the motel an attractive location. Neon lights run bright too. The finale deals in extensive fire, singing the screen with yellows and oranges, displayed with zest by this disc.

Oddly, the studio scene that reveals a mild (super mild even) layer of compression on the UHD isn’t notable on the Blu-ray. Go figure. Fox does some great work here.

Overall, the image on Blu-ray is brighter, but also lacks dynamics. Black levels dig in, but without the same force. The overall palette lacks an edge by the nature of the tech.

In general, the disc renders Bad Times at the El Royale as best it can at 1080p. Capturing the detail and texture, it’s an attractive looking presentation. Color saturates and boldly represents the intended grading.

Fox skimps on the Blu-ray, choosing DTS-HD 7.1 instead of Atmos as on the UHD. Either way, this is a precisely divided audio presentation from the beginning. Claps of thunder hit the low-end hard. That continues for a good chunk of this movie. Stereos render Nick Offerman’s actions on opposite ends of a room, the radio blaring on one side, his work on the other.

The rest is peppered by specific moments. Gun blasts excel in their range, pumping volume and range into the proceedings. A short trip to a beach captures waves delicately flowing around the available channels. An even briefer Vietnam shoot-out employs everything, from scattered gunfire to the booming explosions. All of this balances with a somber, dialog-led story where nothing is lost. Balance is fantastic.

On the Blu-ray only, a 28-minute making of runs through the typical talking points with a promotional tone. There’s a gallery to view, and some trailers too. Meh.

Bad Times at the El Royale

A story of morality and sin, the distinctive Bad Times at the El Royale uses its ensemble in a smart way, in a smart time period.