To answer the question of why promoters snatch Skull Island’s enlarged ape instead of the dinosaurs, it’s because Kong is capable of emotion. It is impossible to look at a Tyrannosaur and envision its hardship. Kong can emote the same as people. We instinctively relate.

Thus, King Kong is necessity. Each screen adaptation proved an important contemplation of the period in which they were made. 1933’s Kong was hopeful escapism amidst the Great Depression’s overwhelming anxiety. Dino De Laurentiis’ ’76 remake struck at the heart of the oil crisis; Charles Grodin’s oil prospector was the caricatured response to grossly inflated petroleum prices — a readily immoral villain. Even the rudimentary King Kong versus Godzilla, with its dynamic foreign comedy, represents the rise of white collar salarymen in post-WWII Japan.

Peter Jackson’s 2005 King Kong is a film of total, unrelenting excess. No wonder: America’s economic prosperity under the housing bubble allowed for it. Three years later and host studio Universal may not have been so generous to Jackson’s wishes. Maybe we didn’t need this Kong in 2005 so much as we did in 2008.

King Kong ’05 displays Kong mastermind’s Merian C. Cooper & Ernest B. Schoedsack’s story in triplicate — or more. A single carnivorous dinosaur morphs into a trio. A water dwelling Brontosaur swells into an entire herd. A cast of 20 blends into hundreds. One hour of runtime spreads to three.

While bold and aggressive, this King Kong remains a depression film. In retrospective, millennium Kong better understands the story’s surrounding hopelessness. The real world despair around King Kong ’33 was too near. There was minimal allowance to show people miserable on screen; customers came to the theater to avoid seeing the hardship outside.

It is no wonder citizens of a failing, starving New York are so enamored by a massive gorilla stage show. Everything else has closed. Kong is the “what if.” What if the country escapes poverty? What if the jobs come back? A restless Carl Denham (a miscast Jack Black) shows them: Things will be as they were. Your luxury will return.

Modern films are rarely so fearless in their cinematic evasion of reality. This King Kong indisputably looks more legitimate than stop motion puppets or rubber suits, yet the movie surrounding the computer model is still knowingly ridiculous. The fantasy renders the primitive ‘beauty and the beast’ story with delectable visual delights without the burden of remaining “real.” Jack Black can hack at man-sized crickets with a rifle butt, Jamie Bell can squeeze between a stampede unhurt, and Naomi Watts’ spine can stay intact as Kong wrestlers her vulnerable frame. None of the fabrications dilute the story’s inherent sympathies. James Newton Howard’s poignant, emotive score (his best, with nostalgic touches of Max Steiner’s formative original) ensures it.

The motions are known: Adventures at sea; sweaty jungles; eerie native islanders; sacrifice; necessary empathy for the monster. As such, the script inserts an additional theme, that of fate. Few remakes are this clever. Ann Darrow (Watts) steps onto the Venture with a frightening note, a shot of her hand slipping from the railing as she moves forward. Her fate is sealed. So is everyone’s on the ship.

Hayes (Evan Parke) is doomed for taking in a stowaway. Herb (John Sumner) dies trying to save Denham’s career. Lumpy’s (Andy Serkis) mistake is that of pity for the dead. Kong only wants understand. The compassionate ones are almost universally cursed by fate. Those gutless enough to embrace cowardice live. What better symbolism for depression-era America, as homeless live in tents and the growing Empire State Building breaches the skyline nearby?

King Kong ’05 fixes the character of Ann Darrow as much as it breaks Denham.

King Kong certainly injects some real world filmmaking history. RKO neared bankruptcy when their Kong initially entered production. No doubt filmmakers Cooper and Schoedsack needed it to feed their insatiable need for adventure. But, turning the audacious and expressive Carl Denham from the excitable, thrill seeking extrovert — an important amalgam of the breathless lifestyle led by Kong’s creators — into a bumbling, desperate psychotic is a misstep, albeit a more logical one given the monetary circumstances portrayed. Were Jackson to produce a sequel, this variation of Denham would remain a conniving shyster as opposed to the panicked but sympathetic Denham from 1934’s quickie follow-up, Son of Kong. There is no growth.

However, Denham is a mere part. He may star, yet this story is too well conceived to be let down by a singular entity. Kong himself becomes richer and nuanced, impressive considering his credentials as a computer generated ape. The beast treats Ann with understandable affection and curiosity. Previously, Ann was something be kidnapped or luridly photographed by the camera. Her eventual stand to protect Kong from the bi-planes is a sign of shared benevolence. King Kong ’05 fixes the character of Ann Darrow as much as it breaks Denham. It’s a wash.

Over a decade old at the time of this writing, King Kong became sandwiched between Jackon’s fantasy epics. How could it not? Lord of the Rings and The Hobbit are insurmountable fantasy. Yet their novel length, multi-film girth is no replacement for Kong’s more intimate frame. Jackson certainly loves the one ring, but there is a sense he loves this ape a little bit more. His King Kong shows audiences just how much. 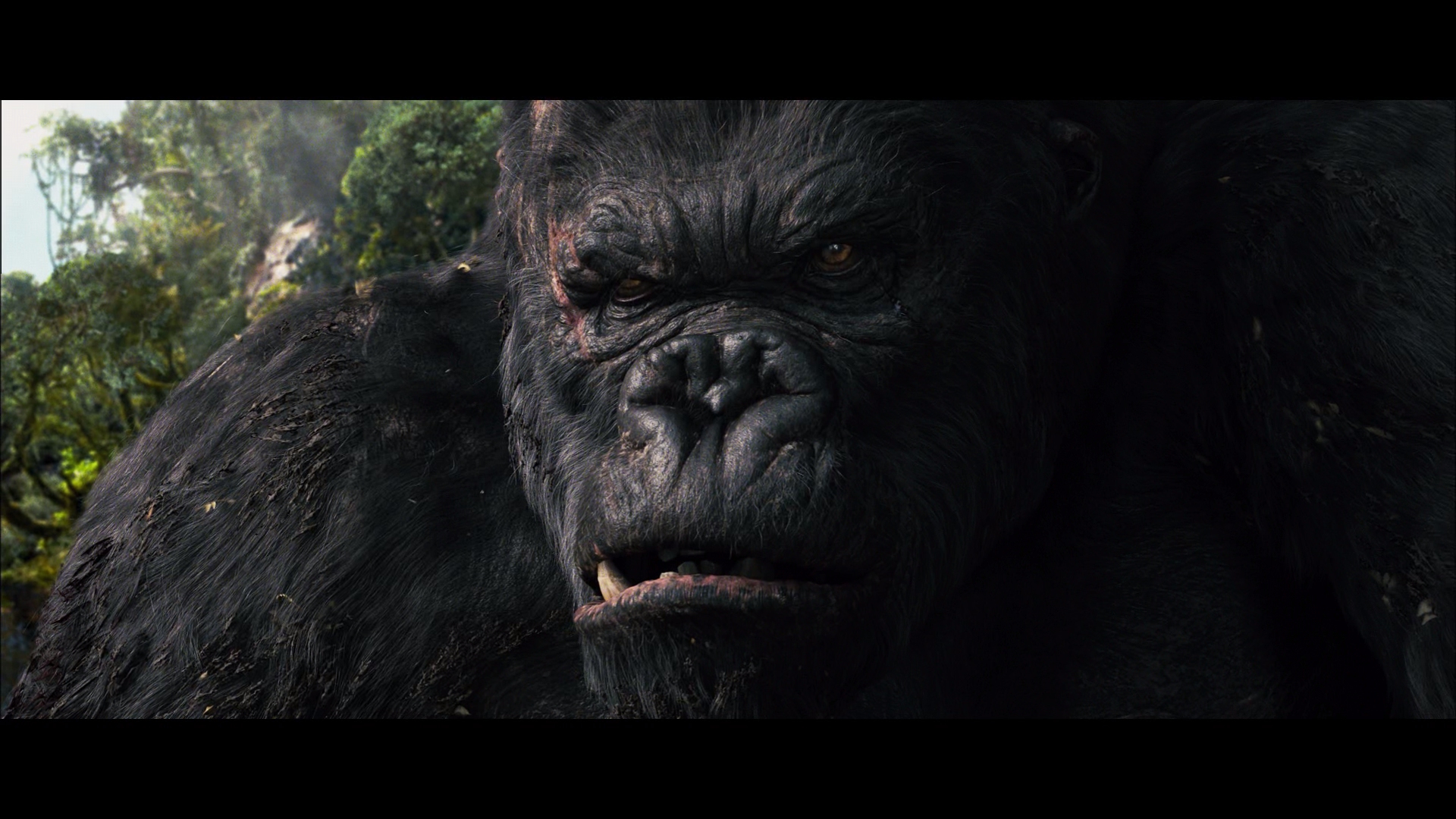 Universal brings King Kong to audiences in a mixed UHD presentation. Primarily, the issues lie with the source material and aging special effects. In an effort to mitigate the problem, a small layer of sharpening is applied to this transfer. It’s not such a bother in close. From afar, this shrinks visual fidelity and rots the quality of the environments. A smidgen of visible halos creep into the frame. The worst comes as Jack Black stands in the screening room to sell his idea to producers.

Jackson gives Naomi Watts an inconsistent smoothing effect as well. Apparently trying to capture the misty close-up look of old Hollywood, the end result is a grating and noticeable digital fault. When Kong sleeps on the mountain, as Adrien Brody attempts to save Watts, she looks airbrushed. There’s no detail left.

This is in contrast to the rest of the image. The jump to 4K produces a notable boost in texture and image clarity. Even the non-4K CG elements look superlative, especially close-ups of Kong. It’s difficult to believe he’s not rendered at a native 4K at times. When processing doesn’t ruin the sights, the jungle bursts with greenery. Before (and after) a digital New York shows off grand definition.

Always a film with heavy lighting, the HDR boost gives this King Kong added zest. Sometimes it’s too much; as Denham presents Kong on stage, the spotlight bleaches his frame entirely. Sunset-soaked vistas blast the screen with intensity, but these have enough restraint as to not cause problems. A fully lit 1930s Times Square astounds. All of those lights come together in a dazzling display. In the shadows, detail holds without crush. Some CG tends to fall into black pretty hard, particularly on Kong. His black fur isn’t easy on this disc.

Color boosting gives the painterly skylines pop, pumping up flesh tones as well. Soaked in various warm hues once on the island, it’s an inviting hellscape from a distance. Prior, the dour blues of the first act and aboard the ship still have weight, giving King Kong substantial energy.

The included Blu-ray is identical to the Ultimate Edition King Kong disc released earlier. This, in turn, matches the first King Kong Blu-ray release we reviewed way back in 2009. While a touch dated after eight years, the disc remains a showpiece.

It’s taken a dozen years for King Kong to reach the era of 7.1, and it does so with a masterpiece of a DTS:X mix. From the first instances of New York atmosphere, the audio track comes alive, using the additional surrounds to fill in the space that was once empty. The belly of the boat, with pulsing engines and hissing steam, creates non-stop ambiance. Deeper in the hull, creaking wood keeps the situation intense. Natives then surround the crew in a flawless execution of a sound stage.

To hear the difference, skip to when Ann is first approached by Kong at the altar. Where the trees being brushed aside one took up residence in the right rear, those sounds now come from the center back. For an emotional showcase, it’s difficult to beat the biplanes, now panning between speakers smoothly, better than before.

King Kong is scene after scene of aural perfection, from the awe-inspiring stampede of Brontosaurs to the subtle cues of the triple V-Rex fight – bats sweep around and vines snap, creating a tense sequence free of music. Kong’s roar creates ample bass, matched only by the dizzying New York finish. Smashing cars and military tank fire give the scenes weight. It’s a brilliant update.

On the UHD, Peter Jackson and writer/producer Philippa Boyens take on commentary duties, and only over the extended cut. Both versions of the film come on the disc.

The third disc in the set holds one of the most complete looks inside of a blockbuster production on any format, easily up there with the mounds of Lord of Rings supplements. The big one is Recreating the Eighth Wonder of the World, split into eight parts for three hours of runtime.

That alone is enough to call the disc complete, but now comes the entirety of the production diaries, once a DVD set released prior to the theatrical release of King Kong. It’s loaded, with videos filmed throughout production, live on the set. Plus, various behind-the-scenes and early visual effects, bumping into a plethora of additional featurettes. This King Kong is as complete a set of bonuses as possible. This, along with the Lord of the Rings, set the standard.

Peter Jackson’s substantial update to King Kong pays homage to the original as much as it does the thrills of classic Hollywood escapism.

The 15 unaltered images below represent the Blu-ray. For an additional 45 King Kong screenshots, early access to all screens (plus the 7,000+ already in our library), exclusive UHD reviews, and more, support us on Patreon.

The following six screen shots serve as samples for our Patreon-exclusive set of 72 full 4K screen shots grabbed directly from the UHD: