Ghost in the Shell won’t introduce any questions not already posed by the 1995 anime (or the cyberpunk genre as a whole). Much of the paranoia surrounds a ‘90s-era corporate dystopia, rudimentary in asking what it means to be human as the population grows complacent with electronic body plug-ins and parts.

In the center, Major (Scarlett Johansson), who spends much of the film dissecting why she isn’t Asian. Ghost in the Shell is an identity mystery movie layered with sci-fi, poking the fickle internet who rightfully demanded a proper recast. The scripting choice is ironically funny in hindsight. Johansson daydreams of her past via a brain of a young woman inside a wholly electronic body. What she discovers is a monumental cop-out.

The rest tells a story built around capitalist hysteria, and a perfunctory leering at human nature. People turn even their basic senses over to the corporations replacing them, leaving the interesting saga of Ghost in the Shell wavering in the background. With languid pacing, Johansson’s derivative struggle doesn’t connect as much as the world around her does.

This is less a movie of narrative than it is of production design. Ghost in the Shell is mighty proud of its digitally tweaked Hong Kong, letting it soak in the camera lens, and eventually into visual redundancy. A slew of shots come directly from the anime, stuck in the rut of Gus Van Sant’s Psycho do-over. The recreation in Ghost in the Shell is less impressive considering a swatch of visuals are digitally animated anyway.

Major’s existence is within a world of rundown progress, fixated on bettering life while simultaneously crushing much of the Earth in poverty. Everything looks worn and rusted. The circumstances that allowed society to reach this point? Utterly captivating in the forward-thinking 1995 original. In 2017, we live the circumstances, glued to digital devices. Either the anime or 2017 remake is deserving of praise, and it’s not the one sticking Scarlett Johansson inside a flesh colored, silicon skin suit. 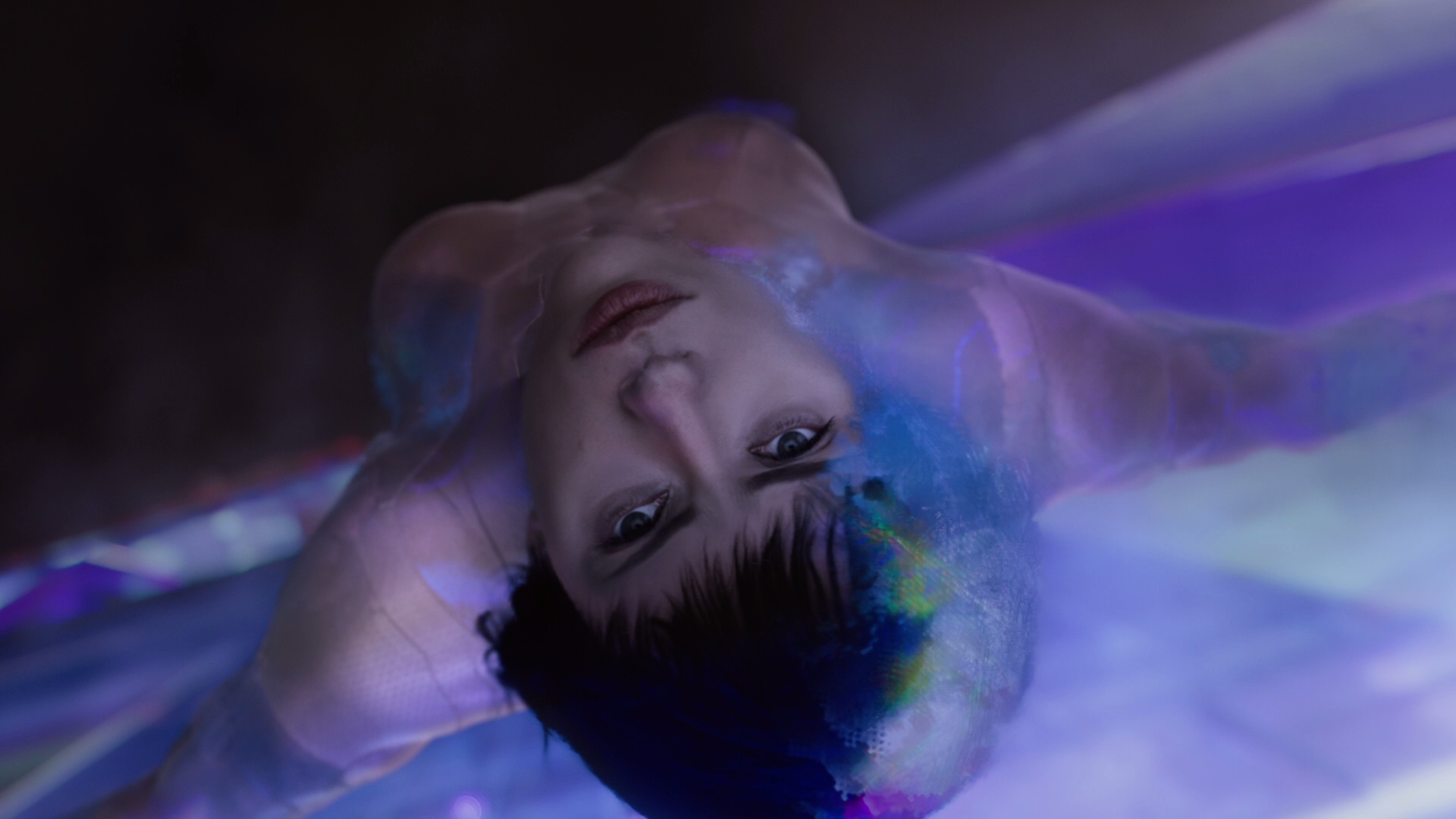 Impressively dark, the sullen look of Ghost in the Shell does fit in on UHD. With the help of shadow delineation and richer color, all of the peaked contrast and grayed out saturation works in tandem with the format’s abilities. Not enough can be said for the black levels, discovering detail even as Johansson is stuck inside an all-black suit in an underlit corner.

Not impressive is the overall lack of dimension. Ghost in the Shell struggles to balance contrast, looking weak and listless, lacking in visual energy. HDR effects specifically take the day off. The litany of neon-like signs and bright holograms dotting the city barely offer any dazzling qualities. It’s a disconcerting appearance.

Finished at 2K, at least fidelity shows up. Close-ups render substantial fine detail. Hong Kong exteriors look wondrous. Holograms break into pixels as they move, each one visible no matter the distance. When Johansson crashes through a window in an early trailer-worthy moment, each shard shows definition. Digital cinematography offers unusual clarity. Every ounce of noise is cleaned from the frame.

With the odd dimness filter of the UHD turned off, the Blu-ray for Ghost in the Shell brightens up. There’s a valid argument the sea of neon offers better bite on this older format.

This come at a cost. Without the resolute shadows, noise tends to creep into the presentation. While not severe, it’s an annoyance. Some shadows veer toward gray all together, diminishing depth. In darker scenes, crush sets in, robbing the disc of fidelity.

Otherwise, Ghost in the Shell performs admirably on Blu. Close-ups produce plentiful fine detail and the texture of the world is easy to appreciate. Colors have zest with primaries escaping the rundown city aesthetic.

Both discs come with Dolby Atmos support, at the format’s peak during the climactic battle against a tank. The guns and shells obliterate the low-end, sucking the air out of the room to add oomph to the impact. Bass presence throughout the disc is substantial, then doubly so during this hefty finale.

While not exquisite in terms of surround use, plenty of instances occur throughout. Guns fire, and the discharged shells lands in the rear speaker. Bullets ping their targets with regularity, and during down periods, this cyber Hong Kong relishes the chance to breathe ambiance. Whether loud billboards or ambient chatter, positional use spreads around the main characters.

The big one here is Hard-Wired Humanity, running 30-minutes, looking behind-the-scenes of the film and the Ghost in the Shell legacy. Section 9 takes 11-minutes to look at the characters and Man in the Machine prods some philosophical interpretations of this material from the cast over 10-minutes.

A rudimentary retelling of the source material, Ghost in the Shell seems paralyzed when in the shadow of the original.

The 15 unaltered images below represent the Blu-ray. For an additional 20 Ghost in the Shell screenshots, early access to all screens (plus the 6,000+ already in our library), exclusive UHD reviews, and more, support us on Patreon.