Strapped to the underside of military jets, Magic of Flight dazzles with first-person, high resolution air shows. Tracking the Blue Angels through their training season and into final runs, this IMAX feature is a dizzying trip into the trick flight circuit.

Tom Selleck narrates a showpiece for the ingenuity of director Greg MacGillivray who slaps a near 100 pound camera into cockpits, tails, or underbelly of these G-force pushing machines. End results, in combination with fish eye lenses, stretch the Earth’s surface below to sell altitude in a visually enticing way.

Magic of Flight pursues brisk history, detailing the successes and failures of early flight, drizzled with vintage photos. Time is not wasted in this surface level historical perspective, building anticipation to the main showcase of large format cinema. Interviews with pilots of various skill sets provide multiple entries to footage and understanding of critical maneuvers.

While some of this mid-90s effort seems destined for 3D (and it is a shame the tech wasn’t ready), it has lost little of its gut churning impact. Cinema has rarely stretched to these degrees, nor is it often afforded brevity to revel in extended lift offs or scenery chasing. This allows Magic of Flight to exhale and relax, even if audiences are gripping a touch tighter during jarring spins.

While unquestionably intended for large format cinemas, most IMAX offerings still command attention in the home. Often, they are shot for easy going, mass appeal, anticipating their massive curtain draw being shuttered on disc. Magic of Flight is one of few to lose its sting in the downgrade to consumer cinema, birthed in and begging for the breadth of pure 65mm projection. Some of the joy is sapped in those swirling vistas. However, it is impossible not to appreciate the technical ingenuity invested in such a feature. 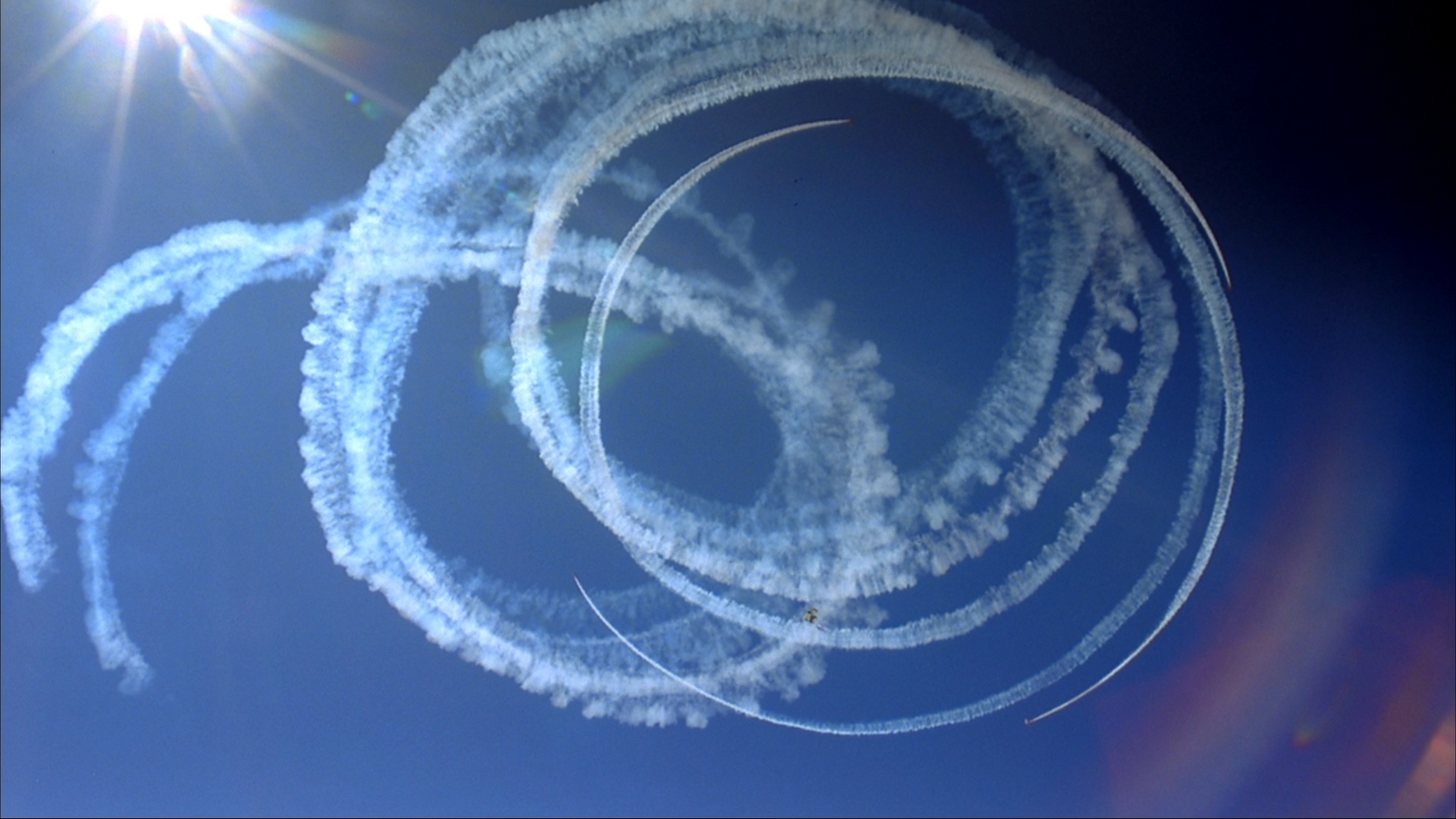 Shoved onto the format in its terrible twos, Magic of Flight was fitted with a VC-1 encode, now remaining as a reminder of lesser codecs in the midst of compression wars. Mastering proves ahead of Image’s output of the time, with thicker fidelity and clarity despite a hesitation to remove all signs of digital tinkering.

Notably, edge enhancement is in vogue, leaving halos stranded in the image. Beautiful sunset cinematography is blitzed with unnecessary sharpening, if (of course) to no detriment of the color. Sequences of office training are miserable, battling back thicker grain doubled by rambunctious VC-1.

Despite misgivings, there are technical achievements in the transfer. Shots of birds flocking to water by the hundreds are uninterrupted by compression errors. Despite a slim haze, aerial footage in motion remains crisp and unimpeded. Even with source grain higher in relevancy than it should be, it typically only reigns in natural texture.

Damage can be severe, although learning of the processes used to capture the footage, it should be of a little surprise to see dirt and scratches on the print. Colors can appear spurting during specific sequences, settling down for the aerial footage which comprises much of the main feature. Magic of Flight is wonky, but still a looker.

Although video technology on the disc sits quietly at the bottom of the Blu-ray spectrum, this is a dazzler in DTS-HD. Coming as a minimal shock considering the plethora of jet take-offs and screen splitting stunt work, tracking and positional aggressiveness is wonderful. Punchy LFE rips up during needed blasts of jet fuel, even coming in to rumble a touch for ambient engine sounds.

This is often done naturally, without the false extensions associated with most IMAX features. Smaller scale interviews are not dubbed either, although one came through out of sync. Effective scoring swells brilliantly into each channel, fidelity never sacrificed. But, who comes into a documentary on planes for music? No one, and Magic of Flight is an overactive audio child. Flips and spins are intense as sound swirls about. Crowds during air shows splurge on additional fill as engines draw into the horizon line. Fantastic mixing.

A 42-minute making of follows in the line with other Image IMAX releases, although this one carries some interesting material considering the shooting conditions. The rig used was impressive. Trivia, a brief history of MacGillivray/Freeman films, and trailers knock this disc out.

Note: This disc is part of the MacGillivary Freeman Limited Edition Gift Set, containing 10 of the IMAX features from their library. The Amazing Caves disc in the set is identical to the stand-alone retail release.