IMAX cameras were never meant for claustrophobic cave interiors. The same likely goes for people. Dr. Hazel Barton and Nancy Aulenbach never received such a message, and climb into underground systems to suit their respective sciences.

The thrills of Journey into Amazing Caves is partially watching people strung up by only a cable, swinging around at great depths. The other part is realizing an enormous IMAX camera somehow fit into the same space. It is an even split in terms of sheer danger, where filmmakers and scientists brush up with death to secure this (literally) enormous cinematography.

Amazing Caves charts the thrill and science-seeking expeditions of extremeophile enthusiast Hazel Barton and her partner, a grade school teacher/caver for life, Nancy Aulenbach, as they break through unexplored areas. They’re searching for micro organisms and mapping these systems for future rescues. It is a course that finds them inside the Grand Canyon, into the rainforests, or the impossible cold of Greenland.

What this means is variety for Amazing Caves, sprouting colors and sightseeing in locations few have ventured. Images are lively, colorful, and delivering a consistent sense of danger. Beauty within stunning blue waters and mammoth ice formations is offset by the intrinsic danger housed inside of both.

Like any IMAX feature, this is a fast mover, jetting across the globe in an unspecified amount of time as Liam Neeson dumps necessary exposition in voice over. Moody Blues chime in for an energetic musical accompaniment, effective during a harrowing run down some rapids and the associated waterfalls. Amazing Caves is a brisk watch and yes, even a hair educational. 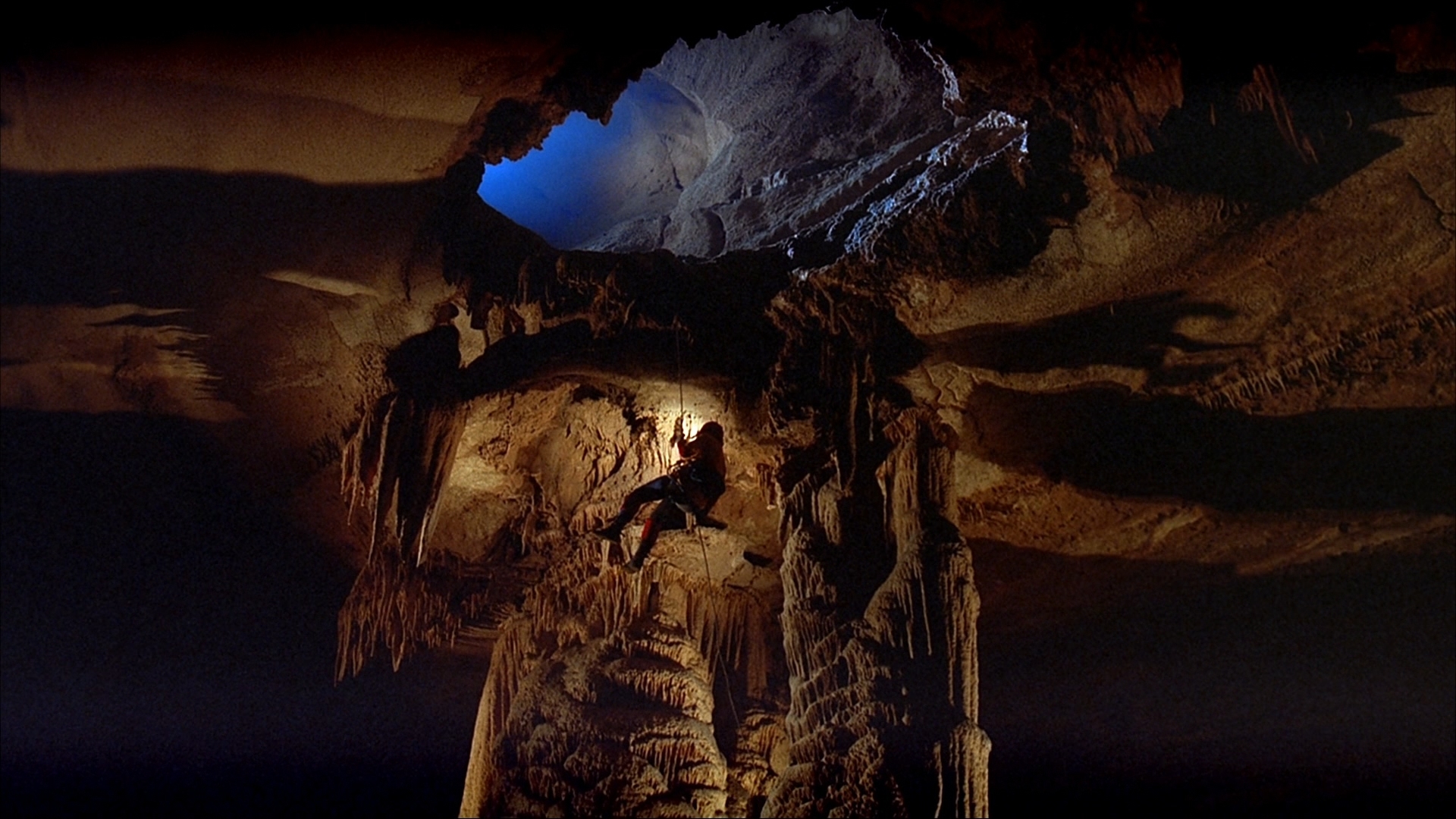 The hit or miss IMAX Blu-rays from Image continue their wonky streak into Amazing Caves. Released in 2001, the feature appears 10 years older and certainly not to 65mm standards. At odds with the imagery is a dose of filtering which softens and dampens appreciable fidelity. Shots of various formations inside and outside caves flicker as the camera moves. Brush or other details are mauled by indifferent processing.

There are dismal IMAX features on the format; Amazing Caves sits somewhere in the middle of these peaks and valleys. This is an edge enhancement free zone and light grain still resides on the images, if buffed a hair by VC-1. Sights are dulled but not washed over. Diving into the heart of Greeland’s icy stretches still produces striking images and the color to match. Naturally blue rivers are a marvel, and the clarity of pure cave water makes it appear as if divers are floating on air.

Aggressive drops into total darkness would appear to crush, although considering the conditions of deep cave systems, it only makes sense to sniff out total darkness in spots. Contrast feels a touch brightened, inoffensively so.

As goes the norm for IMAX, sound effects are added later, allowing for vivid moments of blasting audio. River rapids scatter water around the soundfield, ice caves send ice cracking or falling around the listener, bats flap wings in a panic, and rain forests are wholly alive with ambient sound.

Most telling from this DTS-HD mix is the musical accompaniment. The Moody Blues selection is fine, but it’s the power of an orchestrated score which blossoms into a powerful injection of audio power. A rising choir slams into all channels, and low-end shots rumble into satisfaction. Be prepared for excellent surround bleed from this mix.

Extras are led by a dated if still excellent 40-minute making of, charting the locations and danger involved with shooting this piece. It’s longer than the feature itself, and arguably more tense. A short history of MacGillivary Freeman Films follow, with a trivia quiz and trailers not far behind.

Note: This disc is part of the MacGillivray Freeman 50th Anniversary Limited Edition Box Set, containing 10 of the IMAX features from their library. The Amazing Caves disc in the set is identical to the stand-alone retail release.