Spoof comedies are meant for cheap, disposable laughs, good for one or two viewings. From the comedy minds behind Reno 911! comes one of the funniest horror spoofs in many years. Hell Baby is a comedy scripted by Thomas Lennon and Robert Ben Garant, starring a host of small-time, but well-known, comedic actors. If you’ve seen anything on Comedy Central in the past few years, you will instantly recognize actors such as Keegan-Michael Key, Michael Ian Black, and Rob Corddry. They aren’t household names but they have been responsible for a lot of funny material. This is a genre with vastly more misses than hits but Hell Baby is one of its funniest entries in years.

Hell Baby is a spoof on horror films, though its brand of comedy casts a wide net beyond that limited scope. Jack Watson (Rob Corddry) and Vanessa Watson (Leslie Bibb) are expecting their first child, so they buy a fixer-upper in New Orleans. The dilapidated home is haunted and Jack starts suspecting that his wife is possessed by a demon.

The wackiness begins almost immediately, when their crazy neighbor F’Resnel (Keegan-Michael Key) starts showing up at the most random moments in their new home. Jack begins to get stalked by a very old woman, looking more like a dessicated corpse than a human. Jack accidentally kills the elderly woman and his wife decides to cover it up, bringing around a pair of nosy cops (Paul Scheer). Two Catholic priests also begin to investigate the couple when they hear that Vanessa is possibly carrying the Anti-Christ. Father Padrigo (Thomas Lennon) is a hilarious character in Hell Baby with his wildly bad Spanish accent and dead-pan delivery.

The zany set-up touches on a number of classic and current horror tropes. What sets it apart from bad ones like Ghost Team One are the little homages to classics such as The Omen and The Exorcist. Hell Baby also scrupulously avoids parodying the Paranormal Activity franchise, a huge plus in my book. While no one is seeing Hell Baby for the story, it feels like a well thought-out and polished script rather than a random collection of skits; Spoofs often fall into such a disjointed trap. Each actor is well-versed in comedy and the cast has excellent timing with each other, a critical requirement for a funny movie. These are comedic actors, not good-looking people stuck in a comedy for Hollywood’s marketing purposes.

Horror fans should find a lot to laugh about in Hell Baby. The fluid comedy has sharp writing and funny actors, one of the best horror comedies seen since the halcyon days of the Scary Movie franchise. It is definitely worth a look for fans of this small genre. 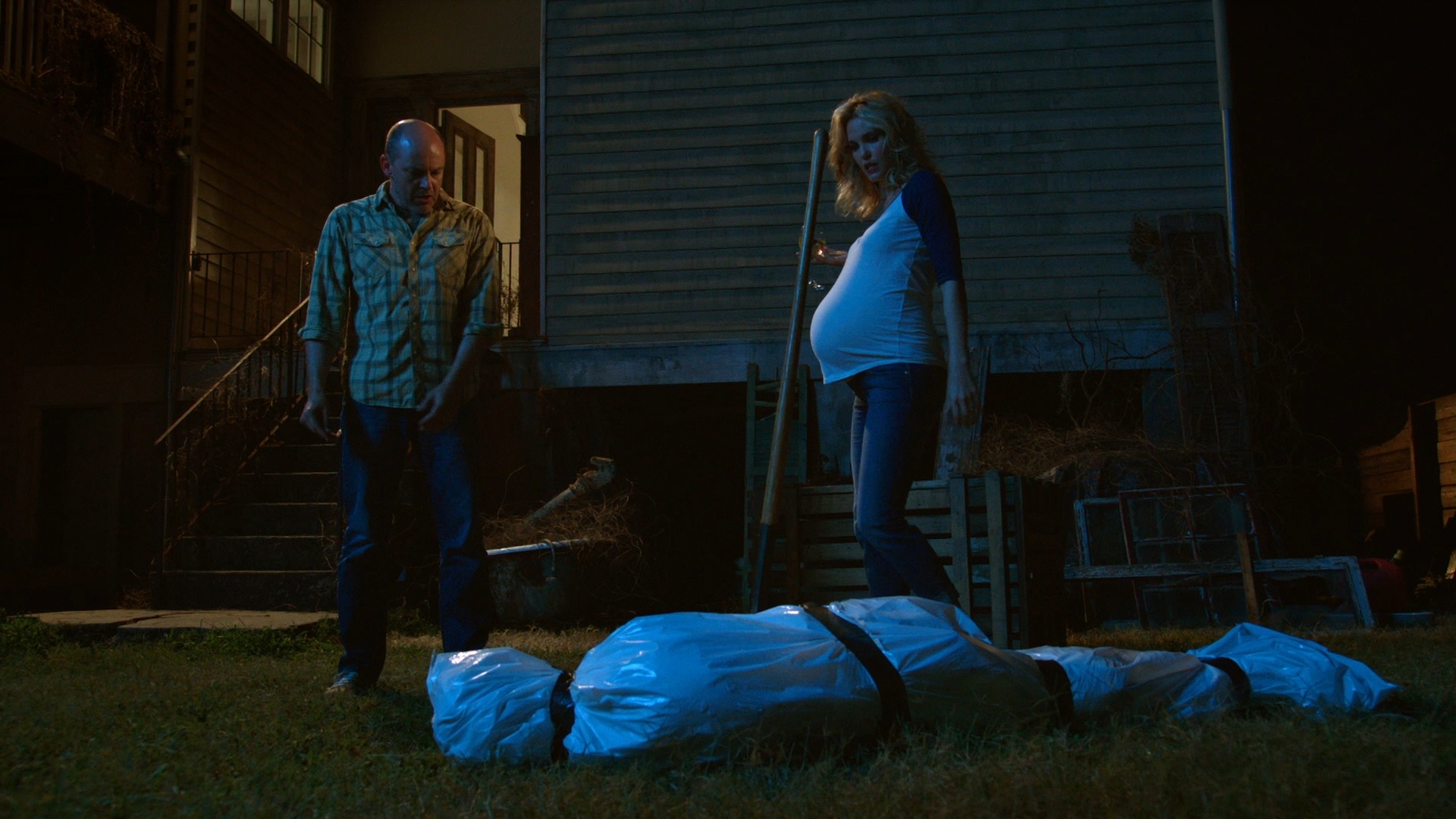 Hell Baby arrives on Blu-ray with a solid, satisfactory Hi-Def video transfer for a new release. Its 1080P video is framed at a widescreen 1.78:1 aspect ratio. The main feature is encoded in AVC on a BD-25, averaging a fairly pedestrian 19.88 Mbps. The digital nature of the video footage is fairly evident, as the pristine image has a nice touch of clarity and sharpness. It looks considerably better than the same footage in SD, the included deleted scenes provide a good basis for comparison.

Millennium Entertainment might have given this disc a slightly more generous video encode, but it’s a competent effort from an independent distributor. Some minor compression artifacts slip into the picture which do not egregiously impact the final product.

The color palette is nicely rendered, if overly pushed towards magenta. Ruddy flesh-tones (in certain scenes) give that away in the digital color-timing. Contrast is largely decent, though black levels are somewhat uneven and occasionally dull. A subtle amount of ringing is evident, though that is likely due to VFX done in post and not harsh digital processing such as DNR. Its clarity and amount of fine detail are standard for modern digital footage. The digital cinematography is sharp and pristine, rarely wavering in overall resolution or focus.

Hell Baby sounds shockingly good with its 5.1 Dolby TrueHD configuration. The score is a spoof itself, mostly using cheesy, horror-themed cues heard in a million other movies, this time for comedic punch. This is a loud soundtrack with some directionality and big dynamics. Expect a solid amount of surround cues and obvious directional sound effects, though it is all nicely layered across the soundstage. The mix falls short of being demo material for audiophiles, but the crystal-clear dialogue and cleanly recorded effects make for a flashy mix considering the budget.

A stereo 2.0 Dolby Digital soundtrack at 192 kbps is provided, though it lacks the big power and majesty of its lossless partner. Optional Spanish and English SDH subtitles display in a white font.

Millennium Entertainment has included a number of deleted outtakes and extended material for Hell Baby, albeit in standard-definition. A commentary from co-writer Thomas Lennon could have been a lot of fun, one of the funnier comedians today at making quips. This had a very funny cast and some good-natured ribbing from them might have been a valuable addition on a commentary. It appears they included these supplemental features in SD to save space on a BD-25. First pressings include a slipcover.

Deleted Scenes (27:50 in SD) – These deleted scenes tend to be extensions on existing material within the movie, though a few were entirely new. Probably worth a look for fans, as they bring the same type of humor as the main film.