Darryl Witherspoon (Marlon Wayans) can’t catch a break as a college senior at the imaginary Stratford University, desperate to land a job on Wall Street. He is too busy working to pay his tuition from several odd jobs to focus on school or a love life, as Daryl comes from an extremely poor family with several younger siblings in need. Senseless is from the director of Wayne’s World, Penelope Spheeris. Much like that movie, Senseless relies on the comedic talents of its main star for laughs and mostly succeeds.

Destined to lose his dream job as a junior analyst at Smythe-Bates to his wealthy classmate, Scott Thorpe (David Spade), Darryl volunteers for an experimental drug trial at the university which pays test subjects quite well. Hilarity ensues as the drug gives him superhuman senses like Superman. At first it is great for him, allowing Darryl to capitalize on his new powers.

Thinking he needs an extra boost, Darryl gives himself a double-dose of the serum, against the strict orders of the scientist running the drug trial. His brain gets overpowered by the drug and he randomly starts losing one sense at a time, leading to funny situations. At one point, his temporary blindness at a Knicks’ game causes him to call Patrick Ewing a “Haitian sasquatch” to his face.

Senseless is a comedy from the 1990s that still entertains today, though younger audiences may not immediately catch all of the comedic references. Marlon Wayans was always one of the more talented Wayans brothers, and this role gives him wide latitude to employ his broad physical comedy to full effect. David Spade plays David Spade, the same role he practically plays in all of his movies. His character is a snarky, arrogant snob that lives off quips. In Senseless he is actually the villain of the movie, as a pampered rich kid that tries to keep Darryl down at every turn.

Other notable cast members include Rip Torn as an older executive, mentoring Darryl through the contest to become a junior analyst. Matthew Lillard plays Darryl’s roommate and friend, a hockey player more concerned with his piercings than anything else. Tamara Taylor is Janice, Darryl’s love interest. The cast gels quite nicely together as Darryl is thrown into one ridiculous situation after another when he starts losing his senses, one at a time.

The hairstyles and clothing are dated, but Senseless still works today as a comedy with solid one-liners and the performance of Marlon Wayans. Marlon Wayans does his best impersonation of a young Jim Carrey, contorting his face and body at any possible angle to get a laugh. The story doesn’t stray far from the rags-to-riches type so common in Hollywood, but Darryl’s hard-working earnestness separates the character from prior comedies like Trading Places. While rectal itching is an extended joke in Senseless, the R-rated comedy is surprisingly tame by today’s standards. 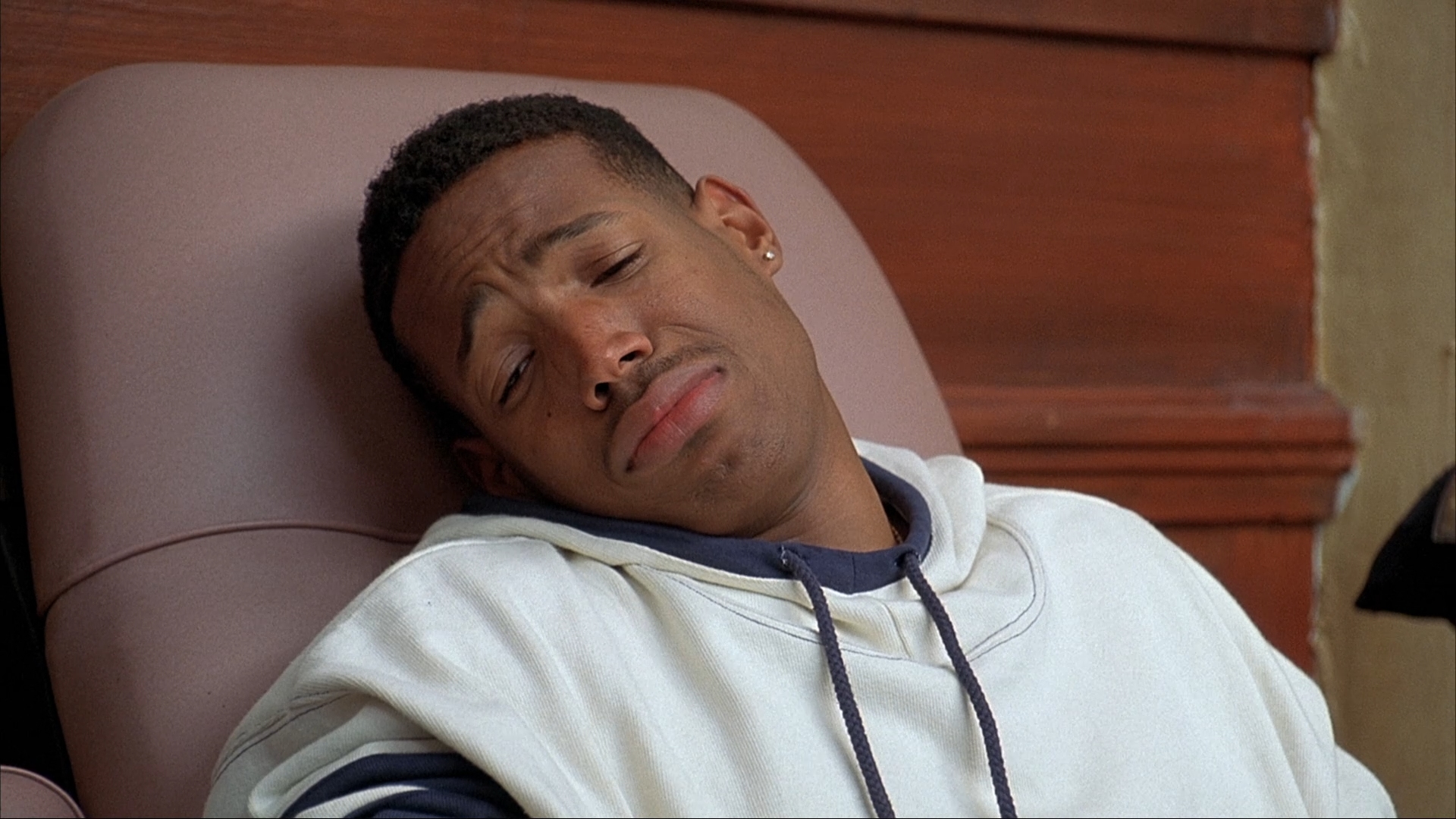 Echo Bridge Home Entertainment must have found a very recent master or transfer made for Senseless. Without a doubt, this is the best video presentation yet from the Miramax catalog that Echo Bridge has released on Blu-ray. Blink and you might be led to think a Hollywood studio like Sony or Fox released this disc. The main feature runs 93:21 minutes at the resolution of 1080P, on a BD-25. The AVC-video encode runs slightly north of 20 Mbps. Senseless has been very slightly opened up from its native aspect ratio of 1.85:1 to 1.78:1.

The 1998 film has been taken from a very clean source, containing virtually no dirt or cosmetic flaws in the print. The level of visible resolution is very pleasing for a catalog title on Blu-ray, indicating the transfer was made within the past few years. The master is still likely from a transfer made for broadcast television, but it looks leaps and bounds better than the rest of Miramax’s catalog from EB.

Contrast is on point and black levels are consistently excellent. In terms of picture quality, the Blu-ray is vastly better than the original DVD. The video compression is a decent effort, only breaking down upon close inspection for the light grain structure when viewed on the largest displays, 60” and up.

The main criticisms that could be leveled against the image are warmish flesh-tones and some ringing. While it is doubtful any digital noise reduction has been used since there is a healthy amount of high-frequency content in the facial close-ups and the grain has not been tampered with, there is mild ringing in select scenes. I would personally characterize the transfer as relatively film-like and unprocessed, though videophiles sensitive to halos will notice the sharpening at times.  Too much magenta has been applied to the color palette, creating redder flesh-tones for the Caucasian actors than is natural-looking.

A single soundtrack has been included for Senseless in 2.0 DTS-HD MA. Echo Bridge has failed to include the 5.1 surround mix found on the original DVD, which significantly hurts my rating for the audio category. It was an active and spacious surround mix, so its loss on Blu-ray is a tough pill to swallow. The provided 2.0 DTS-HD MA soundtrack is serviceable, especially for a mid-budget comedy, but this is simply not the best extant audio for Senseless on home video.

Considering the lossless stereo mix on its own merits, dialogue is clear and perfectly understandable, if a touch quiet in volume. The stereo mix comes most alive when Darryl loses one of his senses, as heavy reverb and echo bolster some of the odd-sounding effects which accompany that problem. That is when the loss of a surround presentation is most apparent, as the original DVD soundtrack heavily used the rear channels. The audio is nicely balanced with some LFE used to complement the Pop music. One of the movie’s funnier moments is when the theme song to The Jeffersons plays for an extended scene in full fidelity.

No subtitles of any kind are provided for Senseless.

Echo Bridge Home Entertainment has provided a single extra feature, a short behind- the-scenes featurette which mostly showcases on-set footage of the hockey scene being filmed for Senseless. Oddly enough, this was not included on the bare-bones DVD originally issued by Buena Vista (Disney) when they owned the Miramax catalog. Matthew Lillard and Marlon Wayans each briefly mug for the camera, but don’t expect any insight into the film. The majority of the five minutes has no dialogue and only minimal sound.

Senseless on Blu-ray is currently a retail exclusive for Best Buy until March 26, 2013. Reports indicate it can be found at Best Buy for $5.99.