You have to be cautious to use the word “perfect” in a critical sense. It indicates flawless, and immediately, almost defensively, someone will jump at the chance to point out something that was missed, ignored, or glossed over within your text. Take your best shot. Planes, Trains, & Automobiles is perfect.

It’s has the perfect music, a pleasing mixture of dramatic and wild tunes that play up the comedic value. It has a perfect cast, John Candy and Steve Martin a priceless duo that makes you wish they did more together, plus bit parts that will have you roaring with laughter. It has a perfect director in John Hughes, an ’80s staple who nailed precisely what his films needed to work. It has a perfect pace, with each zinger of a gag played to its crescendo and clipped before it has a chance to run out of steam. It has the best use of f-bombs ever, a genius release of emotion and anger built up for 40-minutes plus 1,000 miles of American roads.

Planes is a stroke of genuine genius arguably… no, not arguably. It is one of the sharpest written and strongly acted comedies to ever see production. John Hughes’ remarkable slate of comedic gems topped off here, directing three more times without ever finding such a rhythmic quality to his zingers.

Neal Page is Steve Martin’s career highpoint, a sophisticated ad executive with a penchant for the good things in life. Ripped out from under him is first class airline travel, clean showers, non-sticky telephones, and the hands of this wife, replaced by ones belonging to Del Griffith (John Candy). Griffith knows how to go with the flow, dealing with life as it comes at him. It’s the holidays, and despite the trouble, he only sees fault when personally insulted.

Page is the type of guy with a mean streak, yet up to a point that the audience can still relate. He blows up when needed, but does so on varying levels. He yells, he mumbles, he smirks, and he explodes in frustration, the latter a feeling shared by the audience who just wants to see him get home. That, or they simply want more Del Griffith.

Planes is smart, snappy as they come without ever losing sight that Page cannot ditch this aggravating, sloppy stranger. The film revolves around a guilt trip, even after the car explodes. Page has no other options, and that’s genuine. His funds are exhausted, his credit cards are burned, and 1987 was pre-cell phone. He’s trapped, much to a viewer’s delight.

Everyone knows a Del Griffith, although they’re not always as kind or generous. He’s outspoken and oblivious to his impact for reasons that sell the film’s finale. As doltish as he seems, there’s more than a flat character who exists to be annoying. There’s a visible heart to Griffith that is displayed as Planes needs it, rounding off someone who is not just here for the laughs. That’s what most buddy comedies will miss, reaching for gags or one-liners without consideration for the person underneath it all. 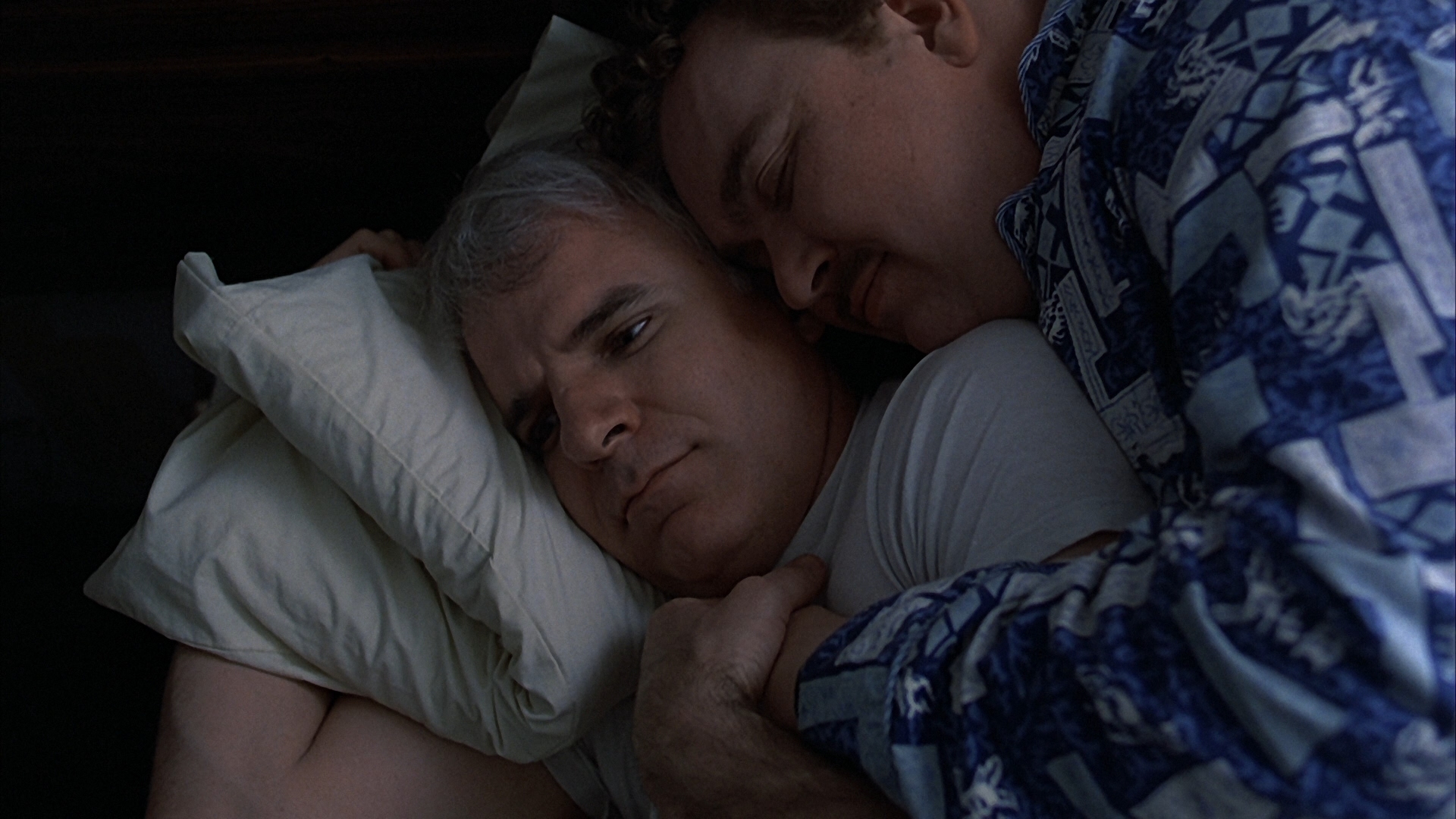 On the Blu-ray, there is a single deleted scene. That’s important, because that scene is rendered at 1080p with AVC, and keeps the grain structure intact. The actual movie does not. Paramount issues a repulsive Blu-ray edition of this timeless classic, fitted with an outrageous level of DNR, light edge enhancement, and probably less definition than the original DVD release.

The disc feels rushed, the back of the case carrying notes for the, “Those Aren’t Pillows” special edition, yet no such marketing moniker appears on the case elsewhere. That DVD had a green strip across the top touting the quote. It feels slapped together, just like the video. Mud looks less like mud than this transfer. Appalling noise reduction is draped over every frame, robbing the presentation of any crispness. Crowds in airports are hilarious to view, gobs of plastic-looking travelers evident for rows.

Grain is frozen in place, assuming there is grain. Inside the motel as Dale and Neal discuss alcohol choices, the background behind Dale looks like a still image. Bizarre as it is, motion will often bring back a heavy, thick grain structure. As Neal runs down the train platform before the ending, the entire screen suddenly comes alive in a smeary grain. It’s as if the transfer suddenly realizes there should be something other than faces that look polished.

Manipulation causes intense flicker on clothing, aliasing on cars, and hair that looks like a gallon bucket of gel has been applied to it. Exteriors are messy, signs are illegible, and halos make edges stand out unnecessarily. Nothing feels true to the source except the color timing, which look natural, even flesh tones. Apparently, even the worst cases noise reduction can leave behind some positives.

Paramount has little into the disc, the master used still showing signs of damage and dirt. Minor as it can be, it’s a clear sign that this one had a label slapped onto it, the extent of what the studio did for this release. Traditionally, Paramount has been one of the good ones, their few gaffes (like Gladiator) placed on Universal’s lap. Now, Universal has turned themselves around. It’s like we’re in opposite land.

Planes opens on credits that capture vehicles panning to the sides, through the surrounds, or a combination or directions. The effect is cute, and doesn’t reveal any artificial elements. Despite a lack of modern fidelity, it comes out naturally… and that’s pretty much it.

Vehicles are a constant presence, always doing something outside of the center. Music will pop at its peak with minimal push into the surrounds, enough that you’d notice were it gone, but not enough that you’ll take heed while it’s happening.

Crowded airports are doing nothing interesting, with respect to a likely mono or stereo source. That’s fine were the mix not trying hard to break free of the center elsewhere. In fact, it comes across as flat. It’s one of those weird ones where the sound only works on its own terms. There’s nothing inherently wrong, and flaws on the track itself are non-existent. Planes only grabs for opportunity at random though.

For a comedic classic, these extras are sure depressing. An hour long look at John Hughes, his life, and his films is included in two parts, both worth watching for their celebratory nature. A short three-minute tribute to John Candy couldn’t be long enough to give him enough credit, but is still heartfelt.

Getting There is Half the Fun takes 16-minutes to look at the film via modern interviews and a press junket from sometime around the film’s premiere. John Hughes for Adults takes the same approach but only for four minutes. Finally, there’s the better-looking-than-the-main-feature deleted scene.