Gladiator opens with a massive battle between the Romans and the last of a barbarian horde. It is seven minutes in, and director Ridley Scott has the audience in his hands.

The battle is huge, with catapults flinging flaming ammunition at a nearly defenseless army. Swords clash, blood flows freely, and the intensity does not let up until all foes are defeated.

Then Gladiator switches gears. The opening scene satisfies the blood lust of the audience who expects it in a movie called Gladiator. What follows is an intense story of betrayal, with Maximus (Russell Crowe) determined to avenge his family, murdered at the hands of a selfish, greedy Roman emperor Commodus (Joaquin Phoenix).

Gladiator slows down for about an hour, and not in a negative way. The film is loaded with unique, likeable, and in some cases detestable people. Scott shows the inner-workings of the Roman government, as Phoenix is allowed to take over the screen.

Despite Crow being the star, Phoenix is the character remembered. His actions are despicable. His whiney voice shows how spoiled he had become. He is selfish, killing his father for not giving him the kingdom. The latter is one of the best scenes in the film, with Marcus Aurelius (Richard Harris) delivering the news the kingdom will belong to Maximus. The disdain and hatred that sweeps across Phoenix’s face is perfect, and his actions a reflection of those same feelings.

When Gladiator picks up the action again, Scott delivers immense scale. With hundreds, if not thousands, of people clashing in the opening scene, delivering battles that feel larger is impressive. The partially digital Roman Coliseum is a sight, and Scott shows it off in a beautiful, sweeping low angle shot that also captures the amazement of Maximum’s first impression.

Action scenes are purposeful, showing Maximus as determined, and a worthy leader. The chariot fight is incredible, with Maximus rallying the slaves to form together to survive. It is action bliss, bloody and violent. However, it is not wasteful and it does not exist simply to show off. Lisa Gerrard and Hans Zimmer’s score is masterful, adding additional power to each scene in which the main theme trumpets along with the action.

Gladiator satisfyingly concludes with a one-on-one fight between Maximus and Commodus, set in the Coliseum with thousands of onlookers cheering the battle on. It is a culmination, one that would not be as satisfying without the preceding character development. At this point in the film, Commodus has done nothing, and has proven he only thinks for himself. His fate is appropriate, and one that leaves the audience satisfied that the previous 150-minutes were well spent. 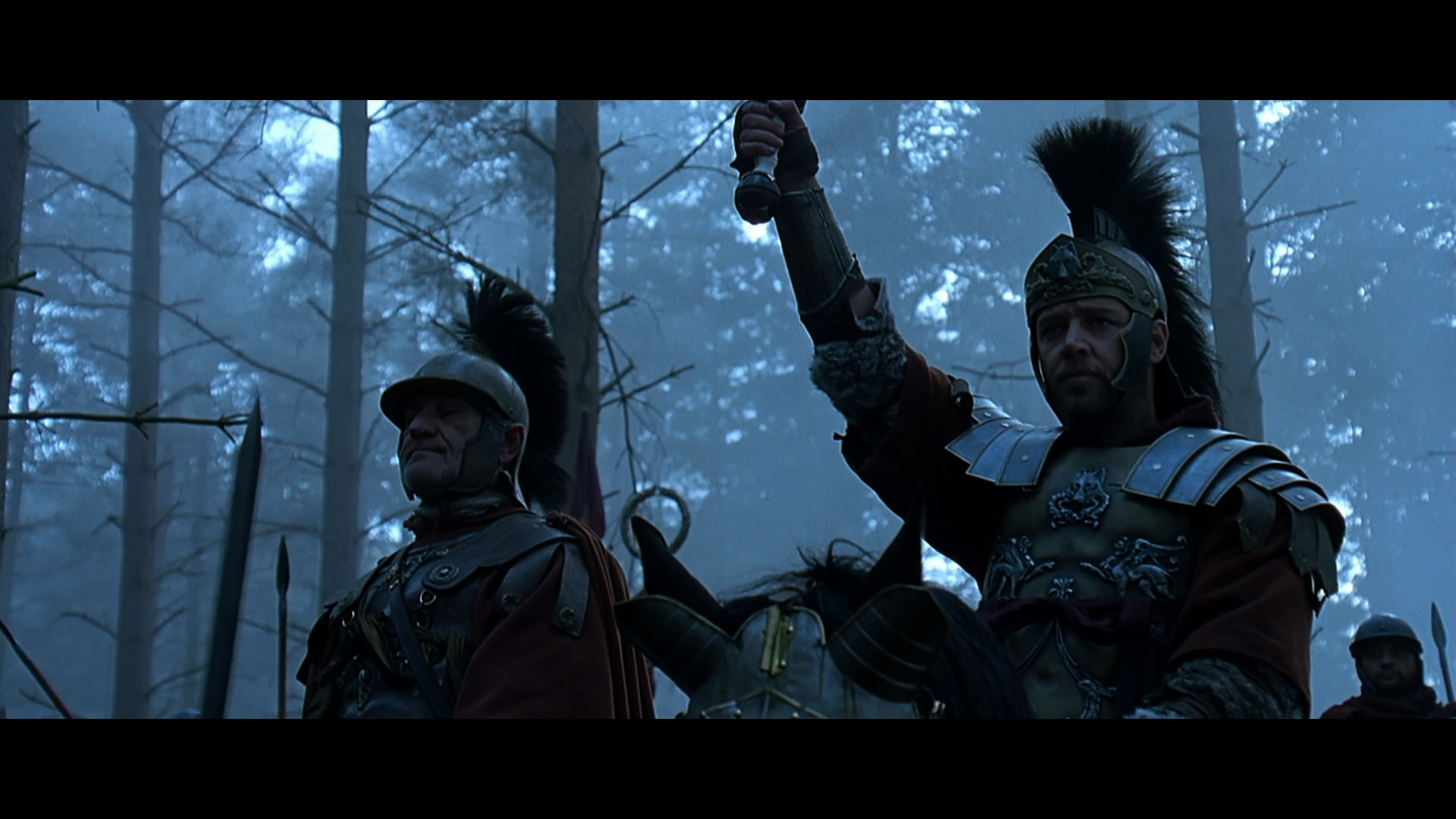 The Gladiator transfer may be one of the most discussed prior to a release than any other Blu-ray disc so far. Screen shots surfaced online early, forums were quick to react, and talks of boycotts and recalls began.

For the most part, the videophile community is correct.

This is a dated master, one that was likely used back on the 2000 DVD release. Smearing is evident in numerous scenes. Arrows that disappear from the sky (as spotted by the online community) are quite obvious, a result of DNR. Faces are smeary pits of wax, and edge enhancement ranges from thick to limited, but is always there in some capacity. Despite the digital manipulation, some specks and scratches remain.

Black levels are typically excellent, generating a satisfying depth (if slight murkiness), one of the few positives. Close-ups that reveal details are still unnaturally soft and processed. On-screen text shimmers, along with armor (watch Phoenix’s shoulder around the 1:03:30 mark). Long shots of Rome are atrocious, blurry and undefined. Whatever grain is left is noisy, thick, and even distracting.

There are those who believe this is better than the DVD. They are right. You can very easily pick out more detail, especially in scenes that are well lit. The lack of MPEG-2 artifacting and resolution increase helps. This is not a case of The 40 Year Old Virgin.

However, that is not good enough. The easy comparison to make is included right on the disc. The extended cut footage is beautiful, possibly even reference quality making the entire fiasco more frustrating. Watching the theatrical cut is cheating you out of some great scenes in terms of the movie and the transfer.

While only around 15 minutes of the film (which is near three hours as a whole), those moments show how this entire film should look. How this made it past quality control is anyone’s guess.

Accepting anything less than what the extended footage showcases is a knock on the format. It is not about being “better” than DVD, it is how far ahead of DVD we are. This disc sets that idea back to the starting gate.

Gladiator was one of the first DVDs to deliver a full 6.1 track, and somewhere along the line, lost that extra speaker. Regardless, this is a booming, loud, forceful mix. The opening battle sequence, like its DVD counterpart, is demo worthy. The catapults fling rocks with power, delivering heavy and clean low-end shots. Arrows whip through the sound field.

The coliseum is lively, with audio pouring into all channels as the crowd cheers their approval. Horses are used constantly, moving through each speaker cleanly and accurately. At one point, a gladiator swings a mace over his head in a circle and the track wonderfully directs the audio into the appropriate channel.

Ridley Scott, editor Pietro Scalia, and cinematographer John Mathieson team for a commentary on the first disc of this two-disc set. Also included here are the “Scrolls of Knowledge,” a pop-up feature with over an hour of content, which thankfully can be viewed separately.

Disc 2 contains the nearly ridiculous three hour plus documentary Strength and Honor, as detailed an extra feature as you’ll ever find. It is superb in its depth if you have the time to appreciate it. If not, it splits into seven segments. Five abandoned/deleted scenes follow if that thing wasn’t enough, and additional art galleries continue providing content (five in total). Finally, a section of various promos, short featurettes, and trailers finish off an exhaustive set of extras.