When The Muppets revived in 2011, certain corners of media attacked the movie’s anti-capitalist slant. Chris Cooper starred at Tex Richman. His name wasn’t coded, as if his cruel oil baron cliche wasn’t enough. The surprise in this is how that same media stayed silent when it came to Smallfoot.

Smallfoot isn’t vengeful of capitalism. A little bit maybe, as an animal show host seeks bigger ratings as his house is foreclosed. That’s minor. Smallfoot’s bigger target is religious belief; a hammer to the head is less subtle.

Yeti’s live under a system of rule, as dictated by a series of stones. All of their belief stem from those stones. Those rocks say Yetis popped out a giant yack’s butt, they live on a floating mountain, and nothing can break those beliefs. When challenged, society puts the challenger down. The stones explain all. They cannot be wrong.

Humans then, and their world that lives below the Himalayan Yeti mountain, is a problem. The stones say such a place cannot exist. But it does, and Migo (Channing Tatum) finds it. What jumps from Smallfoot’s script is the ability to imbue kids to ask questions, reject long-held beliefs, and determine truth. Forget the stones and their commandments – explore, research, and understand.

Key to Smallfoot is what it does with the material, finding greater purpose than routine kid’s fare

That’s heavy. Wait until the end when Smallfoot smashes the current immigration fight, leading to a scene where authorities block the Yeti’s path, the two sides come to an understanding, and then begin to learn from one another. Differences make us unique. That’s worth celebrating, not attacking. Smallfoot is heavy stuff, and its catchy songs further energize each element.

Is it fun? Absolutely. Smallfoot’s beautiful animation and Looney Tunes-like humor give it zip. Realized designs separate the human/yeti spaces, but both utilize sensational color. Himalayan living uses tremendous levels of snow, yet peeking from that is a delighting mix of ice, rocky architecture, and below, a sea of neon. It’s difficult to find a frame of Smallfoot that isn’t appealing.

In a way, Smallfoot plays things safe. The story is inherently similar to Hotel Transylvania (and others) where a human disrupts a hidden world. Key to Smallfoot is what it does with the material, finding greater purpose than routine kid’s fare. Questioning knowledge and discovering fact against ingrained societal belief – where lies serve as a protection from fear – pushes a boundary. Finding a way to do so in a typical animated studio comedy earns additional points. 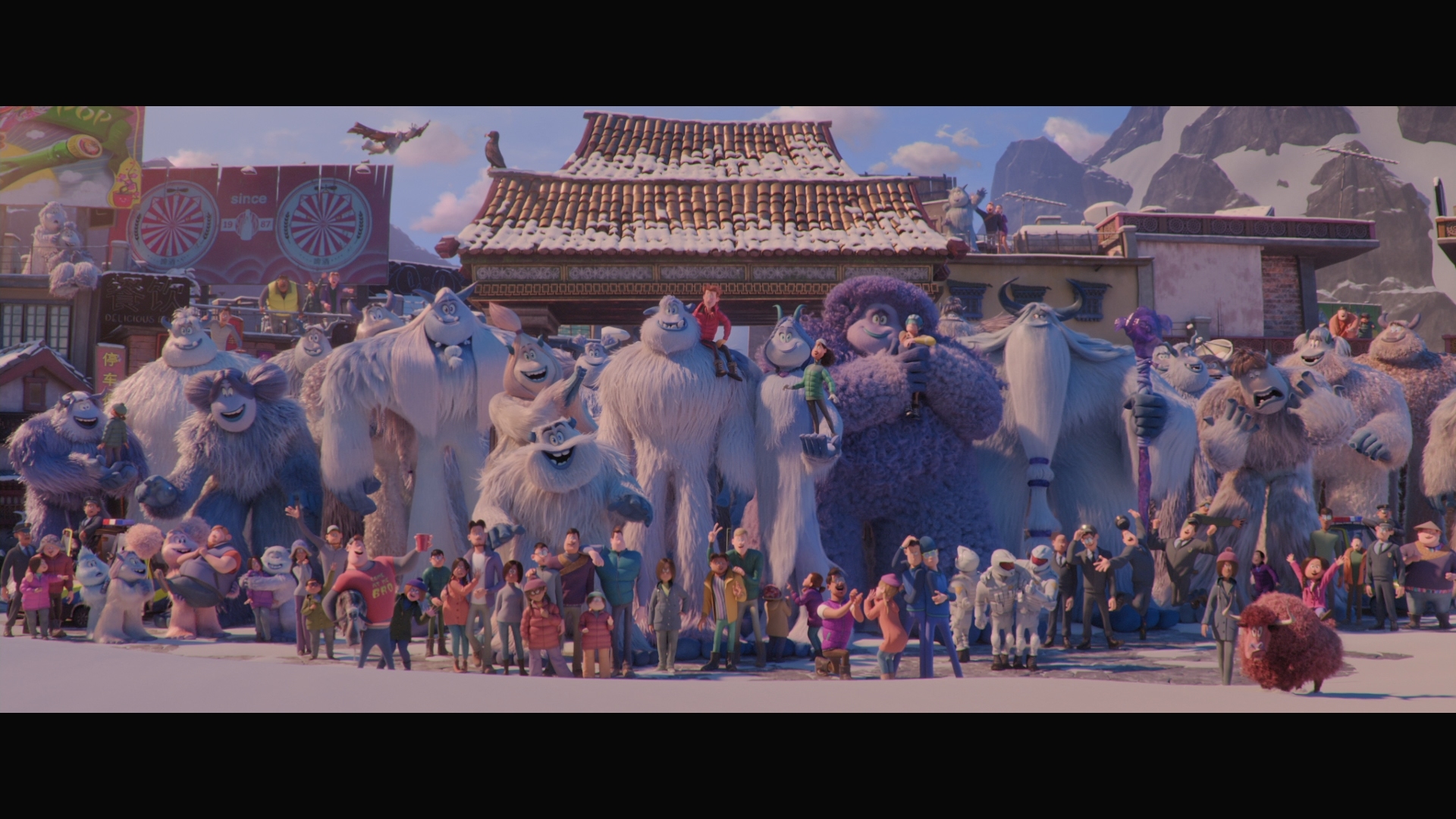 The color. The dazzling, bright color. What a variety Smallfoot offers, from the super pinks of sunrises to the brilliant whites reflecting off snow. Ice produces a dense blue. All of the neon lights hung on the human village’s stores bring everything together in a swarm of intense hues.

Using this lush scenery, images of the mountain or its views display marvelous, firm detail. Yeti fur is especially textural, at times even too much for 1080p, but always exemplary and sharp. Snow glistens, with individual flakes noticeable.

Unimpeded by noise, Smallfoot maintains absolute clarity. By way of the snow, contrast sits on a substantial peak. When the story moves inside a series of caves, black levels take over. Enriching shadows add depth.

In 3D, while this isn’t a hyper-aggressive presentation, Smallfoot keeps things dimensional. It’s easy to pick up layers of fur from one another, for example. Horns jut out from faces. In towns, various overhangs deliver an expected tier of depth. Some falling snow is great too, nicely calibrated to produce a multitude of levels.

Some pop-out moments do make a quick mark. Migo drops toward the virtual camera when trapped on a bridge, stretching past the front plane, a quick highlight. Fall-in effects fare better, especially in long shots of Yeti town where the street’s homes and businesses allow for the full extent of this format. Overall, a casual 3D presentation, but one that never lessens or forgets to take advantage of an opportunity.

Hearty in terms of LFE use, Smallfoot’s DTS-HD mix isn’t shy about employing the subwoofer. An early plane crash seems a bit light in weight, and then things tighten. Yeti roars make for awesome low-end thickness. As Yeti’s step into the human side, their scale accentuates by way of tight LFE.

With nice range, songs pop with vibrancy. Lyrics stretch out from the center. Oddly, positional use lags slightly, unusual for an animated film. Moments of spread do factor in. A fireworks display ramps up. Some voices jump into the two rears of this 5.1 effort. Tracking effects handle smooth channel transitions. It’s not always active though, sedate and routine.

A sing-a-long version of the movie is included on disc, the beefiest bonus feature since the rest sags. A mini-movie only runs two minutes. Cute, but not a “movie” in any sense, mini or otherwise. Another strange sort employees a variety of art, possibly pre-production materials, to tell of the Yeti life. It runs four minutes. A routine EPK features some of the voice cast, and runs six minutes. Some music videos finish things off.

The 15 unaltered images below represent the Blu-ray. For an additional X screenshots, early access to all screens (plus the 20,000+ already in our library), 60+ exclusive 4K UHD reviews, and more, support us on Patreon.