Ironclad: Battle For Blood is one epic bloodbath if gratuitous violence is your thing. Director Jonathan English treads familiar ground in this sequel to his 2011 film, Ironclad. A medieval adventure film with too many one-note characters, a noble English family attempts to protect their castle from vicious Celtic raiders bent on revenge. The most familiar face in the cast will be Game of Thrones’ alum Michelle Fairley, playing a role not far removed from Lady Catelyn Stark.

It is the year 1221 and Celtic clans are raiding the neighboring English castles. Setting up a brutal feud, the clan leader’s son is killed in one such raid. The English lord and his family are desperately holed up in their castle, as the Celtic raiders remain outside its walls. The noble has been mortally wounded and sends his young son, Hubert (Tom Rhys Harries), out of the castle to fetch Hubert’s cousin for assistance. Guy de Lusignan (Tom Austen) was one of the few survivors from the Great Siege of Rochester Castle and has earned a reputation as a dashing warrior.

Guy was a character in the first Ironclad but this sequel has re-cast his role. When Hubert finally finds Guy, the man is a mercenary unwilling to help his aunt and uncle out of their dire situation unless he is paid. Hubert is shocked by this news but accepts it. Another swordsman comes along to help out, Berenger. Berenger feels indebted to Guy for saving his life and follows him.

Along the way, a couple more characters get added to the motley crew destined to defend the castle in epic battle. Joining them are an executioner named Pierrepoint (Andy Beckwith) and Crazy Mary, a near-psychotic woman prone to violent outbursts and killing. This group then sneaks back into the castle. Hubert’s family is stunned to find Guy has returned only for the money, especially Hubert’s sister Blanche (Roxanne McKee). Blanche once promised her love to Guy before he left for battle many years ago. McKee will be recognizable to viewers as the star of SyFy’s new series, Dominion.

Ironclad: Battle For Blood has all kinds of sub-plots and half-baked emotional storylines cooked into the narrative for what boils down to a predictable siege story. The action is intense and gory, despite some lame CGI in the final act. Somewhat typical of direct-to-video fare made on the cheap, the script lacks the polish needed to make this a memorable sequel. Michelle Fairley is prominent in this film’s advertising but Game of Thrones’ fans will discover her role is a minor one as the English noble’s wife, more of a token supporting role.

Ironclad: Battle For Blood is one of those movies you don’t have to seek out unless you love medieval battles and gruesome deaths. 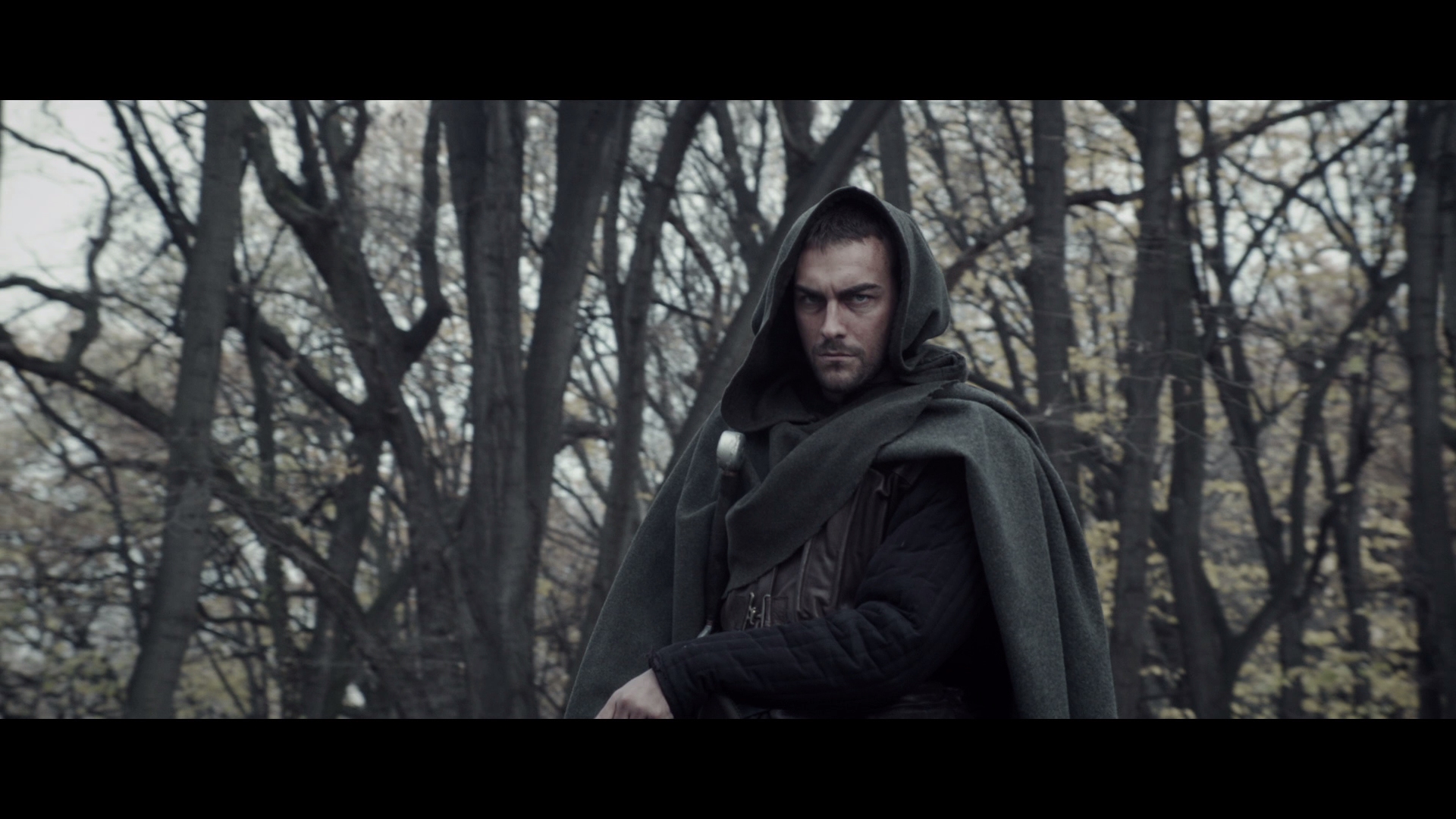 The 1080P resolution video found on this BD lacks the appealing visual quality of most ARRI ALEXA productions. Ironclad: Battle For Blood was filmed on the digital camera, mostly in Serbia. Through a combination of insufficient technical parameters provided by a BD-25 and less-than-stellar digital cinematography exacerbated by the breathless editing style, Ironclad’s sequel is a somewhat disappointing presentation.

One can’t really blame them as a small Blu-ray distributor but XLRator Media gives Ironclad: Battle For Blood a weak AVC video encode. Averaging a suspect 20.50 Mbps for the main feature, minor compression artifacts in the form of chroma noise and other spurious issues will distract on the largest displays. This is not reference video that can hold up to the closest of scrutiny, minor lapses in fine detail and focus are common. The movie runs 108 minutes in its native 2.35:1 widescreen aspect ratio.

The picture itself is mostly sharp. Despite the occasional close-up with gorgeous resolution afforded by the digital camera, longer shots are quite average in overall detail. There is a nice sense of clarity, though the flat color palette dulls everything in the frame. Flesh-tones get washed-out in a couple of scenes. This film has more erratic moments in picture quality than most ARRI ALEXA-shot productions, the camera-work is frenetic and battle scenes are cut like an epileptic music video.

The only included audio option is a decent 5.1 DTS-HD MA soundtrack. There is definitely a lot going on in the surround mix. Audio cues are placed all over the soundfield for a variety of noises. The score is a generic effort that works well within the context of Ironclad’s atmosphere but would not work outside its confines. I did have slight problems with dialogue in the quieter scenes, some of it is buried quite deep in the mix. The recording quality has perfect fidelity and its effects sound authentic, from clashing swords to loud explosions.

XLRator Media includes optional English SDH subtitles in a white font. They remain inside the 2.35:1 widescreen bars at all times.

It will be interesting to see if foreign editions include more special features. Ironclad: Battle For Blood is a film that has been sold to different distributors all over the world. The first film received more special features on Blu-ray in Germany, for example. XLRator Media includes a typical behind-the-scenes featurette and trailer. A slipcover is available.

The Making Of Ironclad: Battle For Blood (15:04 in questionable HD) – Director Jonathan English and most of the cast talk about the film in this brief documentary, between clips of on-set footage and production minutiae. The cast is enthusiastic about making Ironclad, they appear to have had more fun making the film than I did watching it.

More Trailers (03:14 in HD) – Trailers for The Machine and The Human Race precede the main menu.