Salvaged from its cult status in bootleg circles as a long-lost Italian crime classic, Shoot First, Die Later has finally made it to home video in a worthwhile release. Known as a first-rate example of the Italian crime/police genre, it is a movie directed with confidence and cool by the supreme Fernando Di Leo, no stranger to the genre. The 1974 movie is partially based on the novel Rogue Cop, by William P. McGivern. A violent and stylish crime drama for its era, it wears its influences on its sleeves, from The French Connection to other notable Italian films of the era.

Lieutenant Domenico Malacarne (Luc Merenda) is the star of the story. Known as a hotshot police detective and star of the department, Malacarne is beloved by his peers and the press for his numerous crime busts. However, the suave officer is secretly on the take from a local crime syndicate, headed by the ruthless Pascal (Raymond Pellegrin). Malacarne’s father, a cop himself, is proud of his son’s work, unaware his son is a corrupt cop taking bribes.

Pascal asks Domenico to take care of a police report identifying his criminal associates’ cars, which could lead to serious problems for the crime lord’s friends were it traced back to them. The officer in charge of the report? Domenico’s father, a simple and honest cop working a desk job in a sleepy district. It is here the complications in the narrative begin to arise for Domenico and everyone around him, as he deals with Pascal’s murderous henchmen and his own police department. The story is a complex tale of remorse-filled vengeance, as Domenico gets sucked into events beyond his control.

Luc Merenda gives a commanding performance as Domenico Malacarne. At first the world seems at his command, as the corrupt officer is swimming in money and has a reputation praised by all. The weight of his corrupt actions eventually begin to weigh on the Lieutenant, as he gets in over his head with the local criminals and it starts affecting his loved ones’ lives. It is that emotional heft that elevates the movie above its genre roots. Shoot First, Die Later can be a brutal movie to watch at times, dwelling on violent killings in certain shots. One particular scene will have PETA members running for the exits.

If you are reading this review, it is likely you have at least a passing familiarity with vintage Italian cinema of the 1970s. Shoot First, Die Later transcends its origins as an ordinary genre movie with a smart script and excellent performances by the cast. Fernando Di Leo’s firm hand as director adds a stylish twist to the gritty proceedings. A dazzling car chase sequence is the cherry on top of this entertaining package. 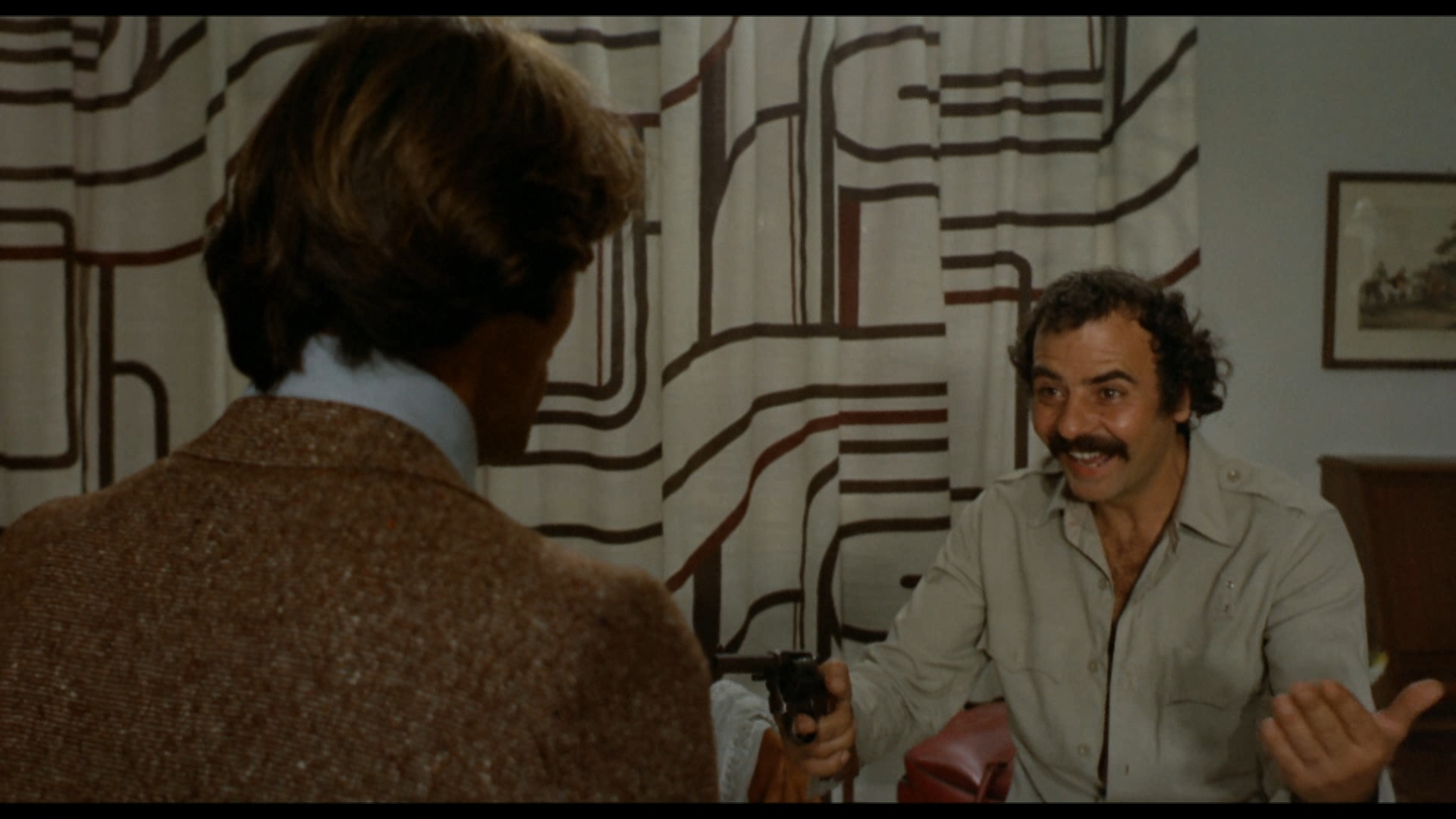 As the slipcover proudly proclaims, this Blu-ray features a new HD transfer from the original 35mm negative. The image capture of the pristine film elements looks wonderful, showcasing what a modern transfer can look like these days on Blu-ray. I would characterize it as a perfect transfer if not for some zealous usage of digital noise reduction. This is a picture that will please any fan of the movie except the most stringent of videophiles.

Running a tick over 94 minutes, the main feature has been encoded in VC-1 at an average video bitrate of 23.50 Mbps. The video encode might have been better suited at higher bitrates on a BD-50, but the BD-25 poses no significant size constraints. Rarely seen these days on recent Blu-ray releases, the VC-1 encoding handles the clean film material with relative ease. There might be a hint of chroma noise in a few dark shadows, but generally the compression is transparent to the underlying transfer.

The film negative looks to have been preserved, or possibly restored, due to its incredibly smooth appearance. The 1080P presentation should be stunning, given the efforts for this release. Moderate DNR can be a useful tool to tame the reduced picture quality of low-budget international films, but its negative side effects are evident in this transfer. Filtering is apparent in most of the movie, reducing the level of high-frequency content and overall detail. One should be thankful for the lack of ringing artifacts or edge enhancement. 35mm film stock from the era tends to contain a heavier grain structure than these results, though it is hard to knock the excellent clarity and balanced color palette.

Black levels tend to be on the heavy side and occasionally become slightly crushed. Interior shots tend to have decent shadow delineation. A couple of shots have darker lighting which appears to be intentional, such as one pivotal scene involving a gruesome killing. Di Leo’s instincts for cinematography are quite good and show his vast directorial experience in the crime genre. The 1.85:1 composition is expertly filmed, particularly during the thrilling car chases.

A completely faithful transfer of the negative probably contains denser grain and more detail than this processed image, though most fans will end up being very happy with the results. The color timing is finely balanced and authentic to vintage Italian films. For a movie that has never had a good release before this BD, the transfer is a revelation.

Italian productions of the Seventies are always an adventure when it comes to their soundtracks. Often intended for international markets, even the native Italian audio will sometimes come off as little more than a badly-dubbed soundtrack. That is not the case for Shoot First, Die Later. Both the native Italian 2.0 LPCM and English 2.0 LPCM soundtracks have well-preserved audio elements. The dual mono mixes reproduce the somewhat wonky score with ease, while strictly maintaining clear and intelligible dialogue.

For a mono presentation, the soundtracks provide a decent amount of punch with a full-bodied sound quality. There is a touch of harshness in the upper registers. Vintage movie lovers will appreciate the overall fidelity, though the occasional sync problem does creep into the English dub. Optional English subtitles are offered in a standard white font.

Raro Video has gone the extra mile in giving this Italian crime drama a special treatment on home video. Aside from the two documentaries, a lavish 20-page booklet has been provided that breaks down the careers of the cast and crew. Covering the production from many different angles, it is more of a book than a booklet, written in exacting detail by a scholar obviously versed in Italian cinema. Color photographs and a slick graphic design round out the booklet’s better qualities. A very cool slipcover is included which features a striking illustrated image.

Master of the Game (24:58 in 480i) – A lengthy documentary featuring an extended interview with legendary Italian director, Fernando Di Leo. It’s a free-ranging interview in which the elderly director goes off in a number of tangents, from the topic of critics to his early cinematic favorites.

The Second Round of the Game (21:20 in 480i) – This documentary focuses on interviews with the cast and crew, most notably Luc Merenda, on the general topics of working with Di Leo and in the crime genre he helped develop. It doesn’t directly address Shoot First, Die Later but covers a number of areas pertinent to the crime genre of the era.