Snippy prisoners are artisans of escape, playfully coy about their determination toward Nazi captors, a set-up for cinematic greatness by those who lived it. Strap a baseball loving Steve McQueen into the tale, hijacking a Luftwaffe motorcycle to tear up countryside, and you have an American classic.

Stalag Luft III hosted prisoners of war, those with a preceding penchant for alluding their captors. The Nazi plan was an inescapable uber camp wherein those fleet footed soldiers could be clamped down under stringent lock and key. Led by a swift acting Brit in Bartlett (Richard Attenborough), the crew’s immediacy towards their run for exterior forests is planted when the imposing gates introduce them to the camp. Conversation is breezy and lippy, assured while defensive. This cast, from the glamorous to the down and dirty, were meant to tell this story.

Great Escape is a film about determination, yes, but also impeccable ingenuity in spite of opposing rifles. Methodologies are built through character, assignments bridged by personality and carried out through frantic midnight runs. Unlike flashy spectacles built strictly for American escapism, Germans here are not indispensably stupid so much as blindsided by the sheer will of the inmates. It plays uniquely fair, on equal ground as a battle of wits commences between warring sides.

Perking up and romanticizing the affair is Elmer Bernstein’s triumphant military march, toying with playfulness and sharpening hurtful drama. Great Escape’s precision ebbs and flows, wandering between smirking Steve McQueen angles or depressing loss in a way few films can claim. Cut off with an emotional peak dead in the middle of what was a celebratory Independence Day march, Great Escape transitions flawlessly into dread and worry, without capsizing characteristic mannerisms.

Palpable tension is seized upon the eventual rush to freedom, a nighttime escapade of claustrophobic sets and searing search lights, with unplanned panic attacks bolstered by unexpected air raids. Explosions force sloppy movements, scattering the band of escapees cross-country in a run to freedom without safe zones.

Great Escape is never oversold, and yet never shy’s from raw satisfaction the audience is experiencing. The build and momentum generated from early frames is smartly aware of its movements towards the conclusion, selling high intelligence under the guise of a comedic smirk. This group of soldiers is so acute at their improvised art, and their camaraderie so untouchable, they could never be anything other than heroes. Why not represent their heart as Steve McQueen bullying Nazis in open fields with their own motorcycle? 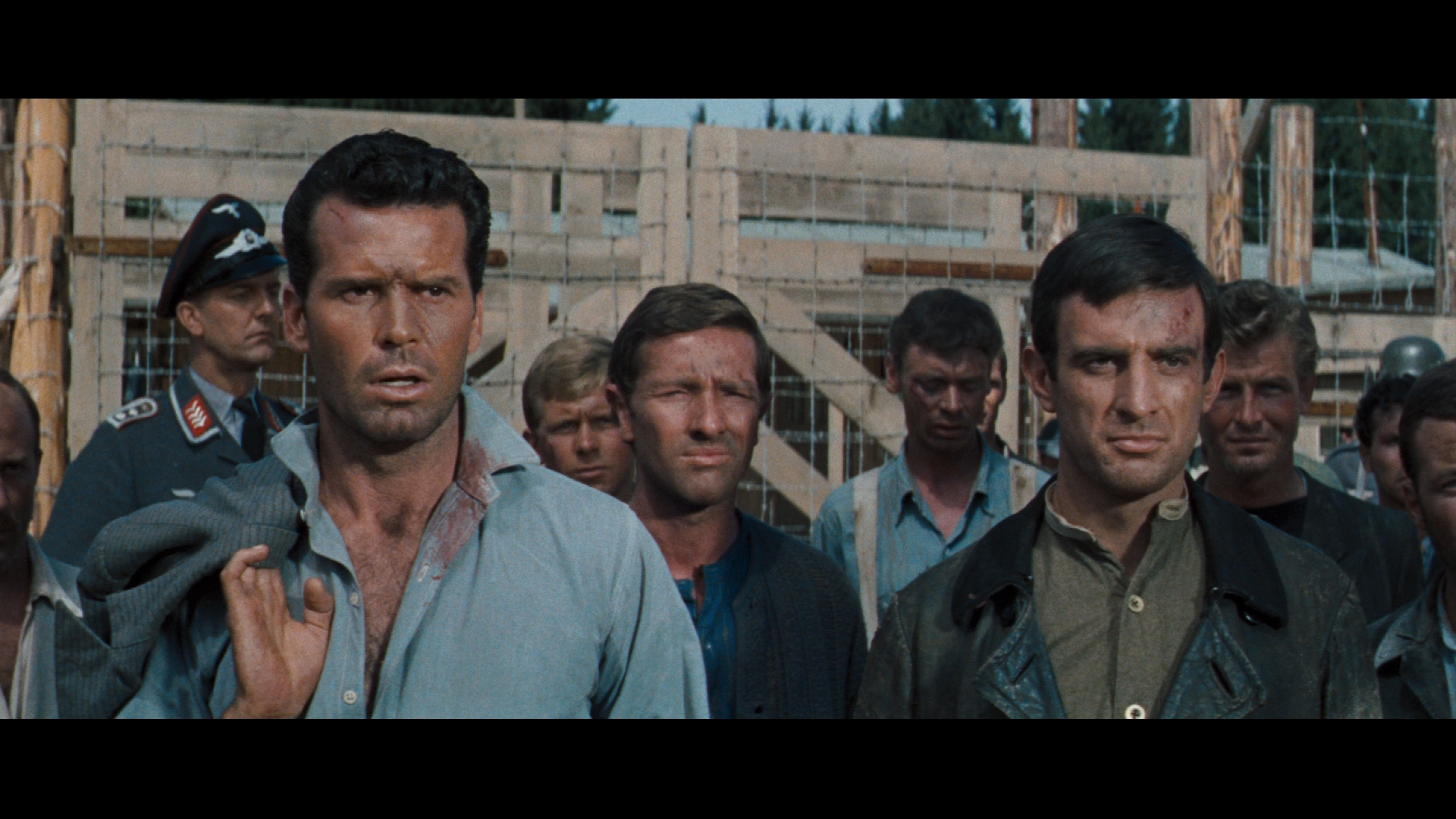 Fox delivers Great Escape to a Blu-ray debut with a debatable, inadequate AVC encode that loses itself during any grain spike. Notably, the July 4th march is baked with haziness, almost assuredly pulled from an unsuitable multi-generational source, running over imagery in an unapologetic manner. Compression is not afforded space it desperately needs, three hours of video planted onto a span of 22GB (for video alone; the disc nearly maxes 50GB after audio and bonuses). That is insufficient to handle those already unsightly moments.

Optical dissolves, as with any film of this vintage, mar the photography with a foggy, softened appearance. Welcome to 1963. Shots in this manner, held without salvaging edits, are drastic in their degradation. That is no fault of the mastering process.

Instead, take it as a beacon of quality. Broadly speaking, the disc is a catalog marvel – when it can be. The shifting nature shows how remarkable Great Escape appears on this format within the common high end. Dazzling clarity, with full respect paid to the source, is displayed from uniform stitching to facial definition. The film is shot sans any tight close-ups, making the preservation of fidelity astounding considering the mostly mid-range camerawork. Gorgeous landscapes of an open countryside, utterly crucial to counter act the confinement of the camp, are a marvel in 1080p. The mastering process, reportedly at 4K, hauls in definition. Grain, while arguably suspect in authenticity, is not damaging. Any egregious digital alterations are done so with such a slight of hand, end results are imperceptible.

Source damage leaves no impressionable faults; dings, dirt, or scratches are freed from decades of potential wear and tear. The film has never looked cleaner. Dashes of color brighten images with wonderful, natural flesh tones plus tight primaries. Density of Nazi and British uniforms is dazzling. Cue up black levels too, hammering the visuals with well honed dimensionality and strict eye for shadow detail.

Bonus – Additional thoughts on video from Christopher Zabel: The transfer seems to be relatively new for an MGM catalog property, likely made a few years ago. The transfer has likely been long-pass/low-pass filtered, stripping out some level of resolution. The Great Escape BD is not as bad as the first Patton transfer that ended up being completely filtered, but it’s certainly not a true film-like experience as it was seen in theaters. There is also some visible sharpening, which does give the image more dimensionality and depth than I expected on Blu-ray.

They also seem to have tweaked color timing, enhancing contrast and dialing up the greens. Those moves improve the film’s appearance from what I’ve seen of it before in prior incarnations, appearing washed-out and lifeless on DVD & cable. I would call this BD’s image watchable, with considerable room for improvement if they had handled the digital tinkering with more grace. I did see some minor problems in the AVC encode. At a listed 18 Mbps for the main feature, the remaining grain left after filtering seems compromised by low-bitrate compression.

This disc shows hallmarks of a release that was prepped a few years ago and MGM finally decided to release it in 2013, for Father’s Day. Zabel’s score:

Mastered in DTS-HD 5.1, no English mono available, the modernized track has immediate impact on Bernstein’s perfectionist score. Clarity is substantial, and the added bump from the low-end is not only clean, it sits within the mix naturally as the opening credits bring the film to life. All of the musical elements are beautifully preserved.

Other aspects carry some artificiality. Voices now wander through the soundfield, perking up stereos and stretching the soundstage, although unnaturally. Elements such as a train passing are more delicate, and balance better as they pass. Then, a plane taking off startles all five channels without any sensible direction, making you forget the subtlety of the train. It is wildly inconsistent in its mixing approach, even if it does at times breathe some spacing into the film.

No matter the qualms over the soundstage stretching (also a possible remnant of aged four track 70mm source), Great Escape remains in well preserved hands. Clarity is afforded to more than just the score, with sharp dialogue from the period. Gunshots ring out as dated studio effects, nothing altered to further make them stand out. This has been handled carefully, even if the positional effects are egregious.

Bonus features are spread thin, most part of a series narrated by Burt Reynolds that should have been a single documentary. Complicating matters it the lack of a home menu; the movie must play in the background when switching or selecting features.

The initial bonus is a commentary, culled from interviews as director John Sturges passed away in 1992, and many others who worked on the film. Bringing Fact to Fiction is the first feature, 12-minutes chronicling the real life story and how it was translated into a successful film. Preparations for Freedom focuses on the escape process, Flight for Freedom tangled up with those who made it out. Standing Ovation is more of a blip on the reactions, critically and from those who lived the film.

The Untold Story is a near hour long documentary, loaded with interviews and recreations to build up the reality of the scenario. Another 10-minutes of cut interviews are offered afterward. The Real Virgil Hilts details the man Steve McQueen’s character was based on. Return to the Great Escape focuses on the location of the famous camp. Fox caps the disc with a trailer.