John Candy had a way of presenting himself as a different character even if he was typecast. He was never far from the loveable lug, a bit awkward and even a bit out of touch in regards to other people on screen. That never overwhelmed him though, turning one of the quintessential ’80s characters into something more in Uncle Buck, someone with a hidden talent for kids, even if it involves a hatchet.

Buck is terribly irresponsible, but he’s got an innovative streak. When he can’t figure out the dryer, he uses the microwave. When he doesn’t have a spatula big enough for his giant pancake birthday feast, he uses the snow shovel. What kid wouldn’t love this guy?

This is John Hughes’ work though, and when you combine that guy with Hughes’ eye for heart and a genuine warmth, you get a classic. Buck is tremendously funny, a late night phone call to the out of town parents about what to give the dog to drink as memorable as they come. The characters transform as they move along, Buck dealing with his personal gambling problems, putting kids and responsibility first. The eldest daughter Tia (Jean Louisa Kelly) breaks from her rebellious teenage phase to learn that yes, “Buck does know best” (why was that not an ’80s sitcom?).

Slap two adorable little ones into this thing in the form of Macaulay Culkin and Gaby Hoffman, and you have a complete set of likeable, funny, and bright actors. Not many comedies get it all right, Buck gifted the right timing, tone, and pacing, the formula so crucial to generating laughs.

In a way, it’s almost a shame Candy was so damn talented and successful. Over the years, his other works, from Planes, Trains, and Automobiles to The Great Outdoors almost overshadow the greatness of Uncle Buck. It’s sort of a cornerstone of Candy’s career that is so oft under appreciated, and it shouldn’t be. 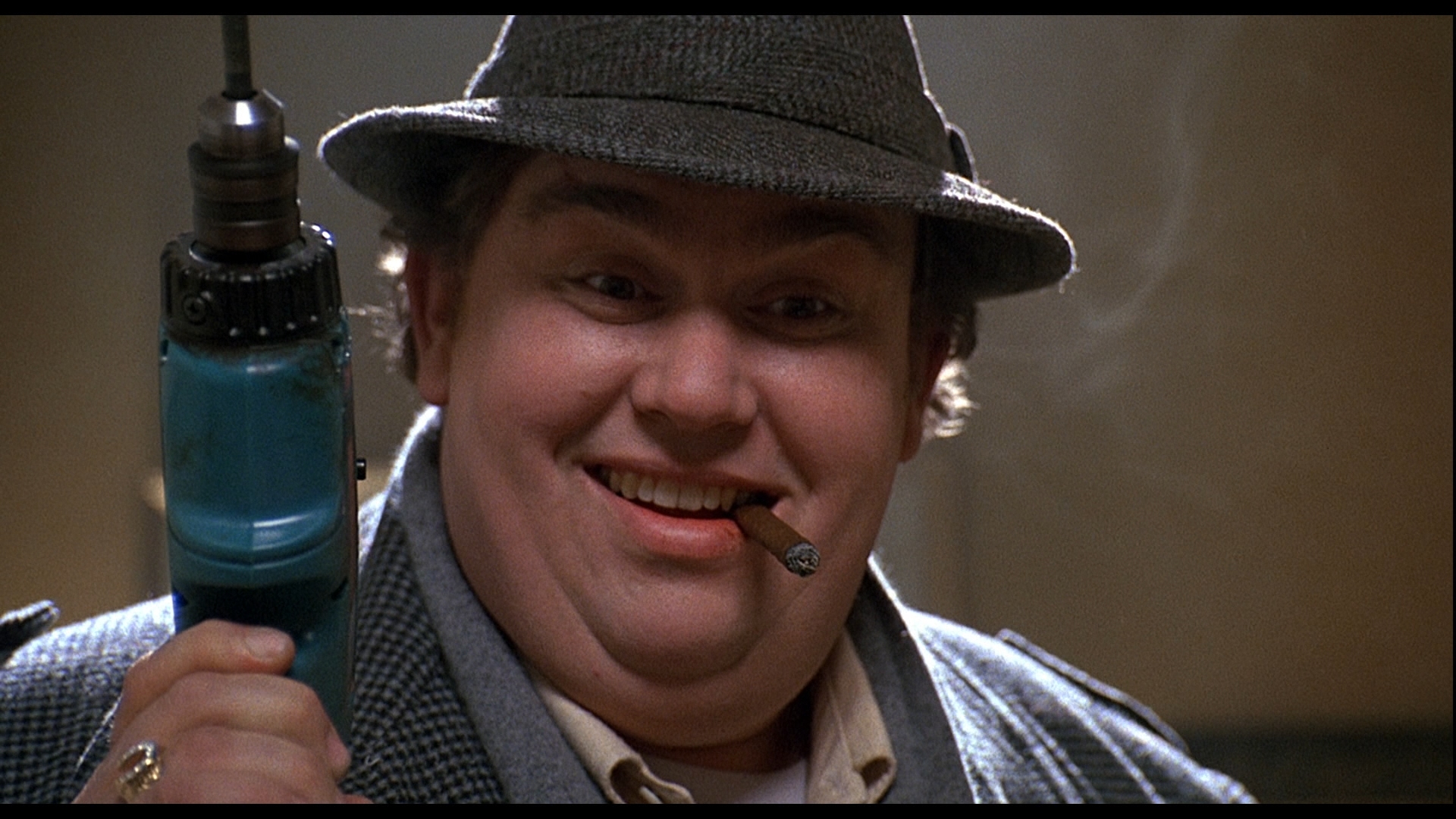 Universal. Catalog title. We’re in trouble. To be fair, this isn’t awful; it might even be the best thing Universal has released from its vaults in quite some time (the dark mark left from Tremors is not forgotten). However, Universal has not left this alone to sell on what appears to be a fine source print with minimal damage. There is some very clear sharpening at play, causing distracting halos in a variety of forms. At least they’re not repetitive in their edge enhancement.

As such, the grain structure, which looks fairly thick to begin with, overtakes just about everything. There’s a high bitrate AVC encode at work to control it, as if Universal is admitting they messed up and didn’t want to further dampen the fun. There is plenty of fine detail hiding behind the unnaturally elevated grain, although making the distinction between facial detail and bits of grain is not always that simple.

Colors seem unnaturally elevated, the two youngest kids given blue and red winter outfits that seem to be sparring with each other for color dominance. Other elements are never given the same chance, or coming even that close to the saturation. As if that wasn’t enough, there’s some contrast boosting, yet another aspect that’s not helping the grain structure, and swallowing shadow detail into that great Blu-ray void.

It’s obvious what the intent was, to give the film some totally unneeded hi-def pop when it was never meant for it in the first place. There’s a fight between making this look like an ’80s film stock and something that was shot last week. That combination can never work, while Universal seems intent on making it so. The low-end of average.

Want proof Universal could care less about their catalog? DTS 2.0. No, not DTS-HD, compressed, standard DVD quality DTS with a paltry bitrate. While the studio seems to have manipulated the video, the audio hasn’t been touched. Maybe that’s for the better considering, but there’s no excuse for not matching up that whole “perfect sound” thing on the back of the case with the material. Keep in mind there’s plenty of room too, as Uncle Buck is given the BD-50 treatment with nearly 23GB of wasted space.

As for the actual quality, Buck sounds flat, lacking range and fidelity. Dialogue has a unnaturally scratchy appearance, while the music completely dies due to the lack of afforded breathing room. Never fear though as the balance is completely off, so if you base your audio quality on sheer volume, this one is a winner. Sure, Buck’s car backfiring should produce a nice little jolt, but it also shouldn’t come through eight decibels higher either. There’s hardly even a stereo split to take note of, the car passing left to right once in a while, further dampening the audio fun.

There’s nothing here unless you consider the excitement and enjoyment (*sarcasm) of Universal’s generic BD-Live splash page an extra.