All of those subtle nuances, things hinted at in previous films, come to a head in Back to the Future III. That sloppy little sequel that proceeded it pays off in spades here, the tighter, focused script allowing room to breathe and characters to develop.

This is a series strong in its traditions, each film having Marty (Michael J Fox) waking up thinking it was all a dream, Lea Thompson by his side. Each contains that Marty & Doc Brown (Christopher Llyod) face-off while they devise ways to escape their predicament. More importantly, they each have the characters, and by this point, the audience is firmly entrenched in their adventure.

There is more imagination on display here, the writing forced to be to carefully weld the entire history together without slipping up. It does, no small feat for Robert Zemeckis and Bob Gale, the film as energetic as the original without being overzealous in its attempts to “wow” the audience with the facets of time travel.

In fact, this third edition is what the original likely would have been had the series begun in the west, paced similarly, running nearly the same length, and developing its characters just as deeply. However, it is a payoff, Doc Brown finally finding some romance to go along with his science, and Marty departing on his final trip through the annals of time.

It is a grand send-off to one of the most well-constructed Hollywood trilogies, that rare event where every sequel is given enough time, care, and attention to work. Few ever achieve this level of success, Star Wars one of the rare exceptions to that rule, right alongside the grandiose sci-fi contributed to film by Back to the Future.

Maybe the most impressive thing about the third film is how unfamiliar it feels. Going far into the future, despite Biff’s corporate take-over, wasn’t the wildly goofy future trip it probably should have been. Taking the series into the Wild West (of course teased previously) is fresh air, the stale cityscapes torn down for a new take. The focus shifts to Doc, not Marty, and the loveable goofball cements himself as one of the greatest characters in all of Hollywood. He’s funny, smart, full of romance, much like the series as a whole. 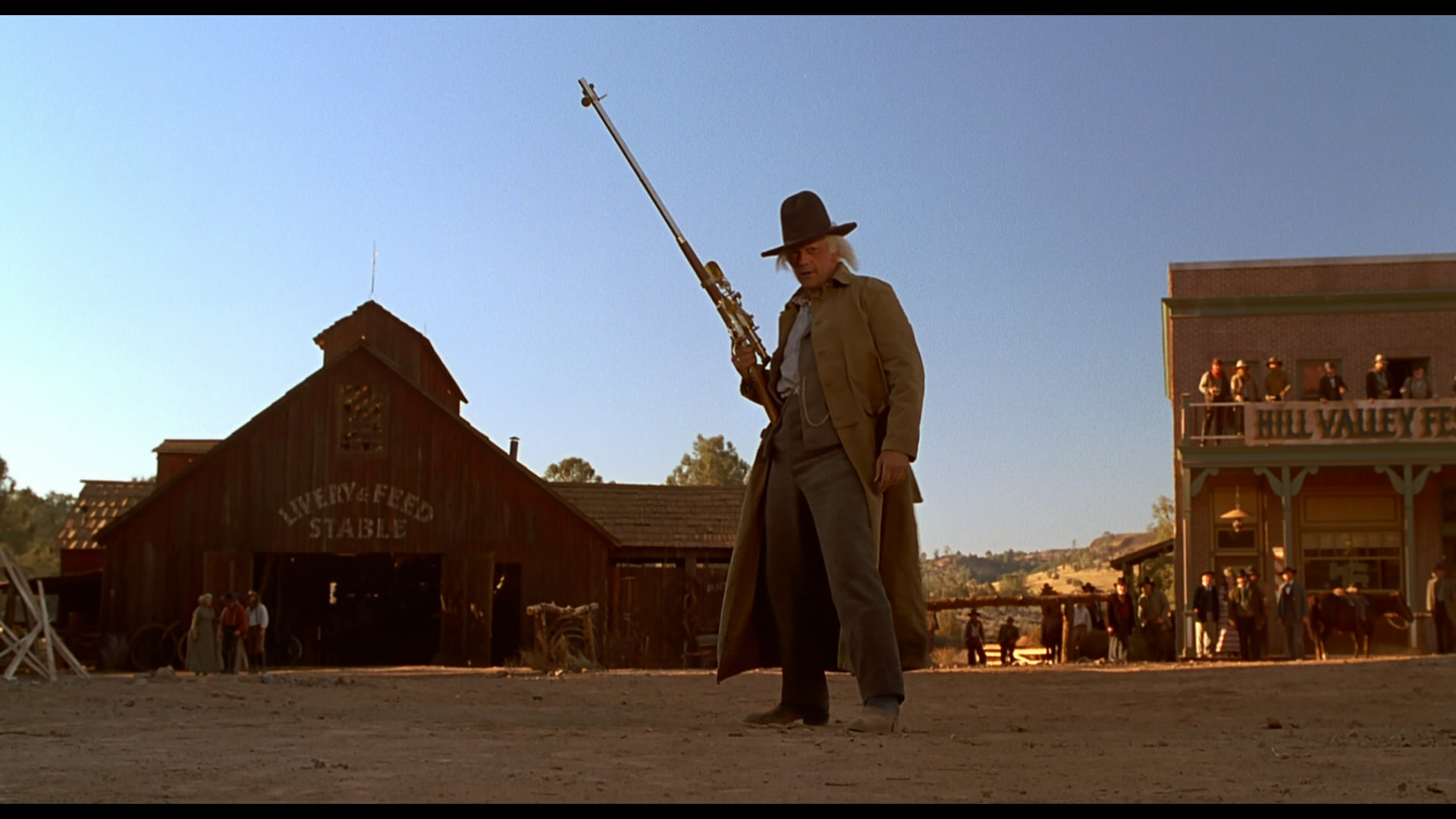 Sadly, one of the best films in the trilogy is destroyed on Blu-ray. If the DNR on the first was evident, atrocious on the second, it’s flat out offensive here. From the opening moments of the film with Marty and the Doc at the theater, it’s a mess. There isn’t a lick of fine detail to be had, faces unbearably smooth and processed. Grain is also absent, almost entirely in fact. The few scenes where it is left on the print seems to be more of an accident.

Oddly, while the previous two discs were encoded with VC-1, the third film is given an AVC effort. Why is anyone’s guess, and it doesn’t make a lick of difference. Better compression won’t save what has become a butchered film. Hardly a second of this movie even qualifies as “good.” Smearing occurs in abundance, although in patches, not consistently. Any shots with the camera pulled back are a nightmare, the early sequence where Marty shows off his cowboy outfit to Doc in 1955 flat out embarrassing. It’s amazing anyone gave the okay to something this sloppy, messy, and unnatural.

Since most of the film is shot during the day, edge enhancement again becomes abrasive. It’s odd too, the obvious sharpening having no positive effect on the overall look, the generous helping of grain reduction causing the image to appear impossibly soft. In-focus shots of the town or mountain ranges are hilariously awful, the initial view of the clock tower containing a full-on halo around it. Hat brims, legs, faces, you name it. They all carry something resembling a religious symbol at times.

This is certainly the most unique looking film of the series, all the more regrettable that it fares the worst due to the extensive tinkering. Colors leave their modern, natural tints for warmer pastures, about the only thing the DNR wasn’t able to alter. It’s a true western, dusty look, pleasing to the eye and rich. Certain aspects do carry some pop, the purple dress worn by Mary Steenburgen for the finale on the train quite vivid. Greens have some life as well, although definitely veering warm.

Black levels are a step up, save for the visual effects where they take on a bit of a digital glow. A minute amount of crush is visible at times, the worst quite minor in Steenburgen’s hair at 1:13:04 as Doc breaks up with her. This is at least a step up from the second film where they faltered. If the positives must continue, the source itself seems to be in great shape. Not an ounce of damage occurs anywhere, and that goes for all three films. Considering how the fine detail was wiped from the frame, it’s no surprise the visible damage was too though.

BTTF III is right in line with the second film, shot back to back so the audio technology was certainly the same. In that regard, it falls right in line with its previous cousin, boasting superior separation over the original. Pans across the stage are natural, the train definitely a highlight. The steam-powered engine passes through the soundfield almost anytime it’s featured, more vibrant than ever during the finale. Each boost as the wood reaches its breaking point delivers quite the jolt, the speed accentuated by the pans across the various channels.

It’s not all about the train though, an explosion early as Doc and Marty dynamite the mine at 10:35 delivers a fun, tightly wound low-end jolt, debris scattering about the surrounds as it returns to Earth. The trip back in time initially involves some completely oblivious Indians who pass right by, jumping over or going around the DeLorean, the DTS-HD mix flawlessly tracking the motion. Ambiance is effective, bird chirps and such noted during some of the walks about town.

Fidelity is excellent, rarely giving anything up in terms of clarity. Dialogue is well balanced, sticking firmly in the center. A natural echo slides in during the bar scenes, adding another layer to this wonderfully robust effort.

Extras mimic the previous two Back to the Future discs in a few ways. There are still two commentaries here, a Q&A with producers Bob Gale and Robert Zemeckis up first. The second is your general commentary, given by Gale and Neil Canton. U-Control support offers trivia, a storyboard comparison, and another that focuses on themes and little additions that connect the series together. A single deleted scenes is here, again with a Bob Gale commentary.

Other features continue, like Tales from the Future, two parts on this disc. The first is a making-of BTTF III, the second acting as a retrospective on the series. The archival section, still with the aspect ratio problem, contains a making-of, a making-of the trilogy, and a TV special hosted by Kirk Cameron called Secrets of Back to the Future.

Behind-the-scenes includes a look at the western Hill Valley, outtakes, and the design around the marketing campaign. A FAQ answers many questions about the various aspects of the time travel via text quite effectively. A section on the Universal theme park ride takes you through the attraction, and comes with D-Box motion support. A music video, trailers, and BD-Live support (the same generic content across all discs) are left.

Note: Some debate has been brought up over the use of JPEG as the format for the screencaps. That is not the cause for the DNR’ed look of these screens, which countless other screen shots on this site can prove. JPEG is used as a default to save on bandwith and limit the effects of off-site hot linking. However, two more screens have been added for the sake of argument, one of the Doc, the other of the Undertaker, both in .PNG format. Feel free to compare and contrast to the same shots in JPEG.