These are not your father’s Teen Titans and this show is definitely not fit for the CW. Having seen Marvel obtain success on Netflix with superhero dramas like Daredevil and Luke Cage aimed strictly at adults, Titans is DC’s first crack at realistic superhero television unshackled from the constraints of network television. The complex action drama stars familiar Teen Titan characters Robin, Starfire, Beast Boy, and Raven in some of the darkest and grittiest superhero entertainment ever filmed.

Titans makes Snyder’s Man of Steel look uplifting and wholesome by comparison. The action-packed series is replete with brutal fight scenes and an unnerving psychological examination of superheroes lifted from Watchmen. Made as the inaugural flagship program for DC’s new streaming service, DC Universe, two huge things stood out in the months leading up to Titans’ initial release.

The first wow was “Fuck Batman!,” a vulgar invective hurled by Robin early in season one and given huge prominence in the show’s online teaser campaign. It even became a meme at one point on fan boards. If you are a fan that thinks Batman and Robin are an inseparable duo, Titans explores a much darker and decidedly more hostile relationship between Bruce Wayne and Dick Grayson. Batman looms over season one, even if his presence is more off screen than as an actual guest character.

The second big reaction stemmed from early publicity shots of the cast that had fans slamming the make-up and wardrobe choices for Starfire, played here by Anna Diop. An orange-skinned alien princess in the comics known for her skimpy outfits, Titans’ producers threw all that aside when adapting the show.

Starfire, going by Kory Anders in Titans, has been refashioned into some kind of ass-kicking, Pam Grier-like superhero. It’s a new take on the character, hampered in part early on because Starfire goes most of season one suffering from amnesia. The producers made mostly reasonable choices in costume designs and most characters have an authentic vibe on screen. Starfire’s hideous wig is an obnoxious exception, which is strange since otherwise this is a television show with extremely high production values. There are cosplayers with better-looking Starfire costumes. However, Titans easily has the best on-screen Robin costume yet and even Beast Boy’s morphing powers look great.

Season one is as much about world building as anything else, introducing a wide range of DC characters

This first season is mostly about introducing the characters as Dick Grayson, formerly Robin, takes charge of a rag-tag group with extraordinary gifts as they confront a dark prophecy. Former Batman protege Dick Grayson and the mysterious Rachel Roth, a special young girl possessed by a growing dark legacy, become embroiled in a conspiracy that could unleash Hell on Earth. Joining them in their quest are Starfire, capable of shooting light and flames from her hands, and the fun-loving Beast Boy, who can transform into a tiger at will. They become a surrogate family over season one through their grim misadventures together unraveling the mystery of Raven’s unknown legacy.

Serious money has been sunk into Titans. Season one is as much about world building as anything else, introducing a wide range of DC characters. The Doom Patrol, the oddball group of misfit superheroes, receive their own episode. Most reading this will know the Doom Patrol have their own series on DC Universe, also coming soon to home video after Titans.

Played superbly by Alan Ritchson and Minka Kelly, Hawk and Dove are introduced and they may be the most polished DC characters. It wouldn’t shock anyone if they continue to have a role in DC Universe’s expanding line-up of original programs and some rumors indicate they may get their own spin-off. The second Robin, better known as Jason Todd, is also introduced and expands the Batfamily’s presence on Titans. We even get Wonder Girl, Wonder Woman’s former sidekick.

Overseen by DC Comics superscribe Geoff Johns and DC television producer Greg Berlanti, Titans is far removed from the comfortable superhero formulas established for the Arrowverse on the CW. While the overall arc of Titans’ first season is uncharted territory in terms of mature storytelling, the characters aren’t that far removed from their comic book counterparts. Everything may be more violent and graphic, but Dick Grayson is still mostly Dick Grayson in personality. Titans sees Dick and Kory as twenty-something adults, an older generation than the teenage Raven and Beast Boy. They almost take on parenting roles over the two young teenagers, solidifying the family theme.

Titans’ first season is dark in tone and surprising, even for jaded DC fans that have seen these characters before in myriad comics and cartoons. The narrative starts picking up right as the eleven episodes end on a gigantic cliffhanger. Apparently the original season finale was pushed back into season two.

Season one is more about introducing the characters and setting the stage for the next season than it is about telling a wholly satisfying and complete tale. In that regard, it feels like an anime consciously made for at least two seasons. That may anger some who want a conclusion and can’t wait. The good news is that Titans’ second season premieres in September 2019.

Probably the most controversial episode will be Dick’s nightmarish vision that takes up almost all an entire episode. It’s a dystopian nightmare set in a different timeline with Dick confronting a Batman who has gone over the line. A happily married Dick Grayson returns to Gotham, hoping to pull Batman back from the brink after Commissioner Gordon is killed by the Joker. It is possibly the darkest moment in DC’s history and many fans of the Bat will be horrified how the plot unfolds. Terrifying and unforgettable, it’s an over the top celebration of death made to generate buzz on social media.

There’s enough greatness in season one to be hopeful about Titans going forward. It’s not a perfect show yet and all too often goes for the most edgy storytelling possible, occasionally sacrificing coherence and allegiance to DC’s rich history. This first season takes a dark and pessimistic look at what it means to be Robin and how Batman’s war on crime affects his understudies as they grow up. 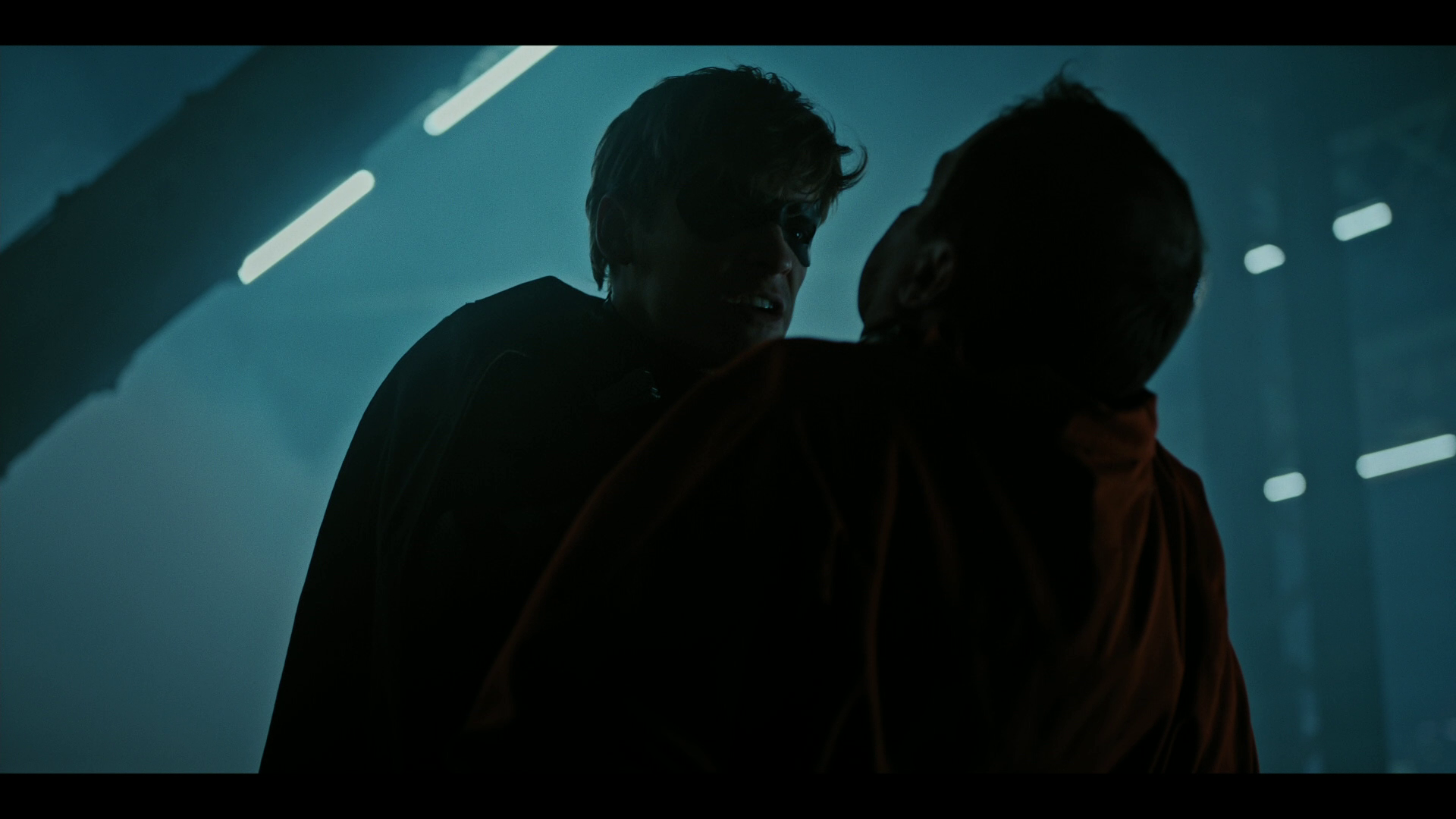 As the debut original series for the fledgling DC Universe streaming service, Titans had many eyes on it at launch and is meant to set the service’s entire tone and standards. Titans makes its home video debut on Blu-ray from Warner in a two-disc set that collects all eleven episodes from season one.

Technical specifications won’t shock anyone that has purchased television programs on Blu-ray before from WB. The AVC encode holds up under demanding action, largely thanks to an impeccably-shot production with exacting cinematography. I counted one shot with visible banding, pretty great for a 500-minute season. A lot of money has been sunk into this production and the visuals would fit quite comfortably on premium cable.

As DC’s first foray into television unhampered by the constraints of network television, Titans takes on a gritty visual tone and an imposing aesthetic drenched in shadows. The live-action drama isn’t necessarily eye candy, but certainly provides impressive clarity and strong high-definition video. Its strongest virtue is an unwavering consistency to the picture quality that emphasizes clarity and deep black levels.

The desaturated color palette avoids primary colors. Titans is the antithesis of Adam West’s colorful Batman show. Titans paints in shades of black and gray by comparison to the bright and lively ’60’s series.

The digital transfer is free of artifacts. Inky black levels and fine shadow delineation help set the mood. Close-ups pop with real dimensionality and razor-sharp focus. Titans is not a show overly concerned with showing off elaborate levels of detail, but takes an honest approach that avoids overusing CGI elements.

DC Universe’s first original series sees its “complete” first season hit Blu-ray nearly a year after premiering on the streaming service. Despite the inclusion of thirteen “mini” featurettes, the special features feel on the light side compared to some earlier BD sets from DC media such as Berlanti’s CW programs. There’s a surprising lack of promotional trailers for DC programs, including other shows on DC Universe.

Most of the main cast make at least token appearances in the featurettes listed below, including Brenton Thwaites, Anna Diop, Teagan Croft, and Ryan Potter. Minka Kelly and Alan Ritchson also show up in interviews.

The two-disc set arrives in a slipcase with a single sheet for the episode guide. The included digital copy redeems in HDX on VUDU.

Raven and Robin: Dark Rebirth (08:08 in HD) – This is by far the most substantial featurette provided on the entire set. It sees executive producers Akiva Goldsman, Geoff Johns, and Greg Walker, not to mention several lead cast members, discussing the show’s focus on these two characters. Apparently they were going for a horror tone for Raven’s arc. It’s a fairly revealing behind-the-scenes program that explains their goals making Titans.

From Page To Screen (02:23 in HD) – Producer and writer Geoff Johns explains the history of the Teen Titans in comics and other mediums.

The Redemption of Robin (02:29 in HD) – Describes Robin’s natural leadership of the Titans and what it means for his continued development.

What Does It Mean To Be Cast As Starfire? (01:53 in HD) – Actress Anna Diop breaks down in tears as she explains what it means for a person of color to play Starfire and fan reaction.

Anna Diop Having Fun With Teagan Croft (03:10 in HD) – Teagan Croft makes an unscheduled appearance during one of Diop’s interview, which leads to the castmates having a good laugh together.

An extremely dark and mature take on DC’s teen superhero group, led by a traumatized Dick Grayson leading Raven, Starfire and Beast Boy as they come together for a looming threat.

The 15 unaltered images below represent the Blu-ray. For an additional 30 Titans screenshots, early access to all screens (plus the 30,000+ already in our library), 75+ exclusive 4K UHD reviews, and more, support us on Patreon.