As Good As It Gets’ script impresses for how logical it makes the pairing of three social oddballs. And more so, an unlikely romance between Helen Hunt and Jack Nicholson forms a genuine tether between them that keeps pushing them apart as much as pulling them together.

It’s a dog that does it, a little anyway. Dogs do that, turning the persnickety, OCD-suffering Nicholson into a genuine charmer – with the dog. People not so much, yet even after tossing a dog down a garbage chute before the opening credits are over, he’s a comedic misanthropic masterpiece.

One of As Good As It Gets tricks is owning up to Nicholson’s bitter narcissism, then wrapping the entire story about bettering himself… but only for him. He genuinely pursues Hunt’s affable single mom character, but lets his genuine personality slip with her, and often. Despite bigotry, he even helps a gay artist living across from him, and that duo, who show how good Nicholson has it, sends him on this awkward, misshapen journey to smile more.

Broadly, the script is borderline embarrassing, heinously generic in the romantic comedy formula down to the inevitable break-up and then desperate late night call to patch things up. As Good As It Gets goes beyond that loathsome cliché elsewhere, delivering on a story about three people at their lowest, finding each other at the right time, then joining in their misfortune.

A lot of modern comedies swell with disdain. That’s their humor. As Good As It Gets dodges that cynicism (at least by its closing moments), choosing instead to lift up these previously disconnected people, bringing them joy, no matter how long that takes. That makes the ending satisfying not for the romance – everyone sees the kiss coming – but rather the success, of smiling, of laughing, and how even the worst among us do care deep down.

There’s a brief subplot about American healthcare before the first act is out, chastising a system that burdens even children. As Good As It Gets otherwise ignores social standing and problems. It’s just human, almost perfectly so, as envisioned by a major Hollywood studio, plus the sweetness generated by James L. Brooks’ direction. 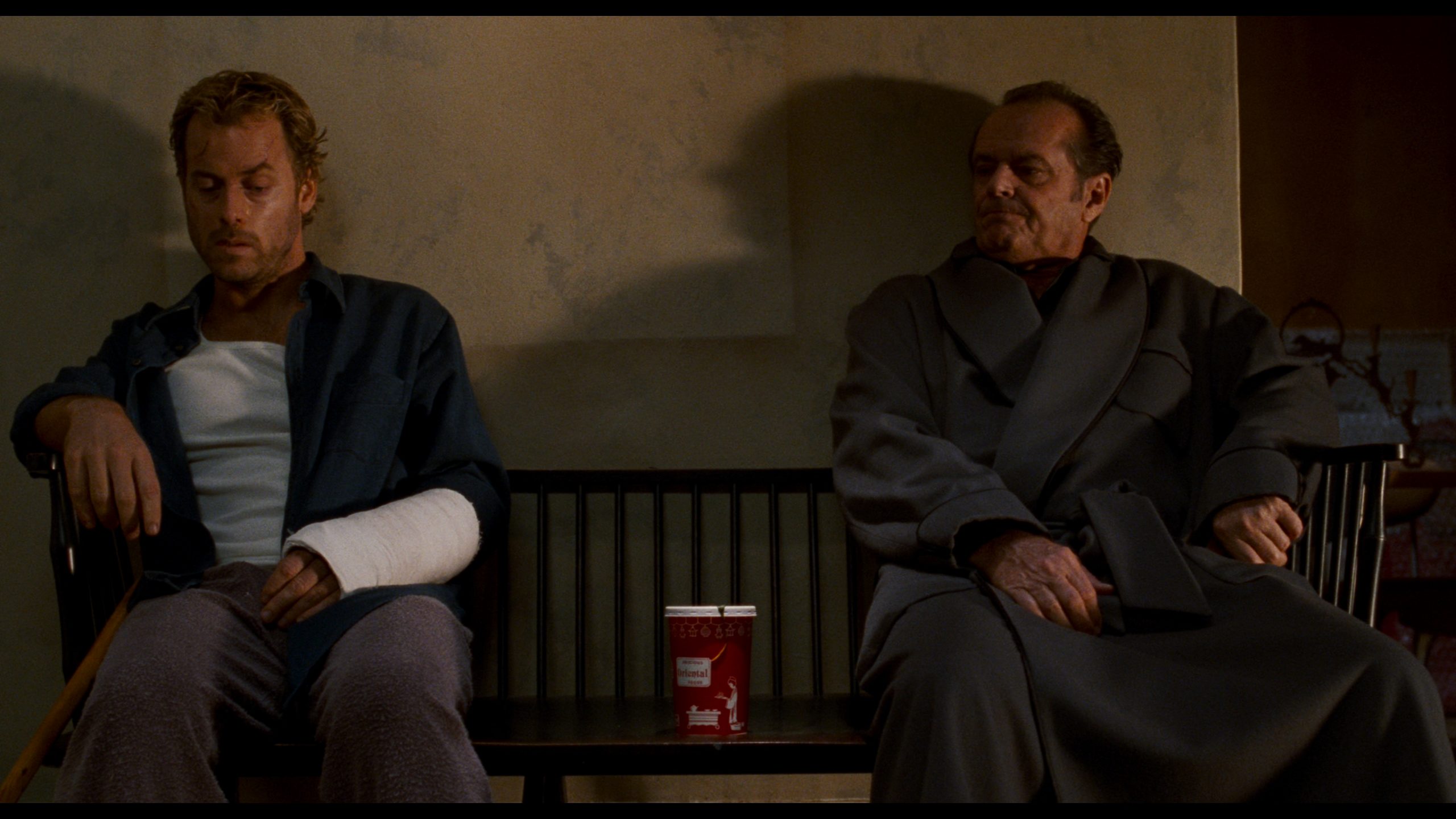 As Good As It Gets starts questionably behind the printed titles. Thick grain descends to chroma noise, but it’s a quick turn-around. Once into the film itself, grain shrinks to a minimum, held together by the encoding. That leaves pure, natural imagery behind, resolved crisply aside from a slight tinge of the cinematography’s deliberate haze. Detail sprouts openly. Facial definition looks fantastic in close. Exteriors handle themselves just as well.

Color splendidly comes alive in Dolby Vision, from the yellow taxis outside to the red seats in the restaurant. Flesh tones present a well saturated warmth within this gorgeously organic palette.

Generous in contrast too, brightness sustains a pleasing peak where possible. Metal shimmers under New York sun or off windows. Black levels have their own thrust. Shadows deepen to provide a hefty foundation for depth. That remains stable throughout.

Strong in sense-of-place ambiance, this Atmos remix livens up every moment in the city. Rears track passing traffic and horn honking. Voices pan while walking. Inside, doors slam in the proper channel or music spread into the surrounds. It’s a constant performer.

Bass jumps from the low-end where possible. Not often, but music can light up the subwoofer.

Director James L. Brooks chimes in via a commentary track, joined by his cast including Nicholson, Hunt, and Greg Kinnear. An older EPK-like making of joins deleted scenes, additional EPK interviews, and trailers.

As Good As It Gets