“America always sorts its shit out,” says a mall security guard watching TV as a local sheriff orders zombies shot in the head, live on air. If there’s a singular line that defines the Dawn of the Dead remake, that’s it, both in terms of the post-9/11 zeitgeist and the change in tone.

Dawn of the Dead originally admonished consumerism culture, with the zombies representing the mindless, advertising-afflicted horde trying to enter a mall. In 2004’s remake, the mall is a convenience, providing great coffee, plasma TVs, beds, and tools with which the survivors can defend themselves. Not only does consumerism and a capitalist agenda help, it’s treated as a sanctuary. A luxury, even. More absurd, the guard, still holding onto a sliver of power, locks people up so they don’t loot the stores. Profit margins matter, even in an apocalypse.

By the third act, Dawn of the Dead takes from videogames in their worst ways

There’s plentiful gloss to this do-over, giving the action more splatter while updating character archetypes. So little of Dawn of the Dead matters though, just an aimless zombie excursion whose best moments come during the introduction. Ana (Sarah Polley) sees her daughter and husband turned as she makes a frantic escape from her upper middle class, suburban development. She’s given one moment to briefly grieve, then hardens up, because to feel emotion is a weakness. 9/11 happened three years earlier. To Dawn of the Dead, time to move on from the horror. That’s how America sorts its shit out.

More than the greatness capitalism’s supply chain offers, masculine toughness supersedes all. The calm presented as characters settle in, treating the undead masses outside as a shooting gallery, playing chess, and having sex, looks rather absurd. No panic, no fear. They have guns, ammo, and food – the American dream.

By the third act, Dawn of the Dead takes from videogames in their worst ways, using propane tanks multiple times like grenades to take down the horde. Chainsaws and shotguns are treated with visual cool, delighting in the slaughter, and mirroring the national disinterest in gun debates. Here, guns become the lifeblood, and ammo a currency traded for longer life. The mall provided that. And yes, they sort their shit out in the most American way possible. 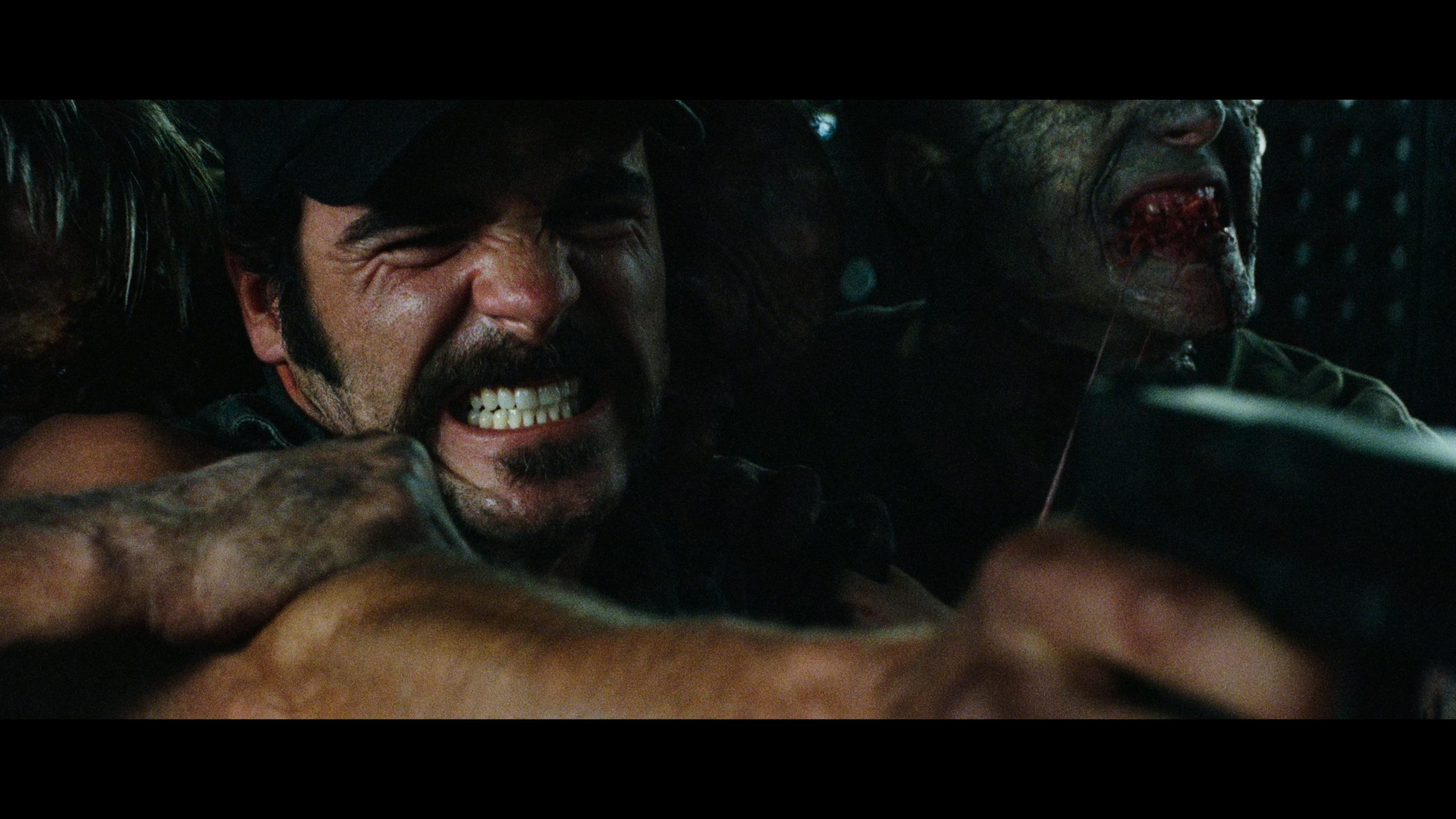 The color… so much color. Saturation is set to hyper mode, beginning with intense, glowing flesh tones right on the precipice of bleeding. Turns out, every hue is like that. Blues explode, and red blood looks absurdly overcranked. Dawn of the Dead is very much of the early color grading era, made to stand out on SDTVs.

Dolby Vision doesn’t veer from that style, but instead enhances the vibrancy. Note this can and will alter contrast. Skylines take on a yellowed or orange tint, as if always at sundown. Teal becomes dominate once settled in the mall, driving the color to a strict, almost monochrome tone indoors.

This doesn’t mean brightness suffers. Peak white still carries a definite intensity, and given Dawn of the Dead’s heightened reality – much like the color – it’s extreme. Wet skin covered in blood always glistens at peak nits. Clipping is common. Crush happens on the opposite side, even frequently. This does minimum damage to the depth however.

While still in 5.1, there’s plenty to take stock of. Panning effects begin early as Ana drives through her neighborhood. Zombies snarl as they pass and cars jump front-to-back effortlessly. Attack scenes fill the soundstage perfectly, keeping activity at a constant. Ambiance remains high as the empty mall adds a small echo to everything.

Bass primarily stems from the music, providing a heavy, room-shaking drop from jump scares. Gunshots do drive into the low-end. Zombies slamming into windows elicit a jolt too. Propane tanks going up in flames give off a sustained rumble that’s spectacular.

It’s a triple disc set, beginning with the unrated cut in 4K alongside a commentary featuring director Zack Snyder and his producer Eric Newman. That commentary carries over to the second disc, the unrated version on Blu-ray. Snyder then returns to introduce this cut, along with legacy features. The final disc is the theatrical cut on Blu-ray, and that pairs with interviews including Ty Burrell, writer James Gunn, actor Jake Weber, then a featurette on the effects, deleted scenes (with optional commentary), trailers, and finally stills.

Choosing its own path, Dawn of the Dead’s remake alters the theme for a post-9/11 world, but lacks the same punch.