To Kill with Intrigue is notable in Jackie Chan’s career for a few reasons, none particularly important so much as curious. One is Chan’s meanstreak, opening the film by slapping his pregnant wife and leaving her (or so it seems). Second, he’s facially scarred during the final act, certainly not something Chan would commit to during his career’s prime. And third, the wire work, an uncommon method later in Chan’s career, but employed here often.

To Kill with Intrigue isn’t Chan’s movie, giving him a co-starring role

The rest deals in stolen jewels, a soapy romance, and, per genre norms, revenge. Chan spends a notable portion of To Kill with Intrigue silent or mopey. Even worse, a chunk is spent sleeping while recovering from a serious injury. This means To Kill with Intrigue isn’t Chan’s movie, giving him a co-starring role, which considering the late ‘70s time period, was fairly typical.

Usually, a few fights make these early Jackie Chan adventures worth looking for. Not so much where To Kill with Intrigue is considered. Campy wirework exaggerates the combat, at one point sending an opponent through a home’s roof with just fists. Elsewhere, the clumsy editing and sloppy camerawork (at one point, hiding the choreography behind a foreground tree) limits the appeal.

Chan’s journey doesn’t connect either, the character making the decision to run from his wife for her own good, then trying to find her by constantly yelling her name. The twists that come introduce bit players and bit parts that seem limited in their necessity, clumsily extending the runtime past its boredom point. Even as a generic Hong Kong fable, the static revenge plotline drives minimal interest, along with giving Chan the bare minimum to work with as an actor (outside of his athletic prowess). 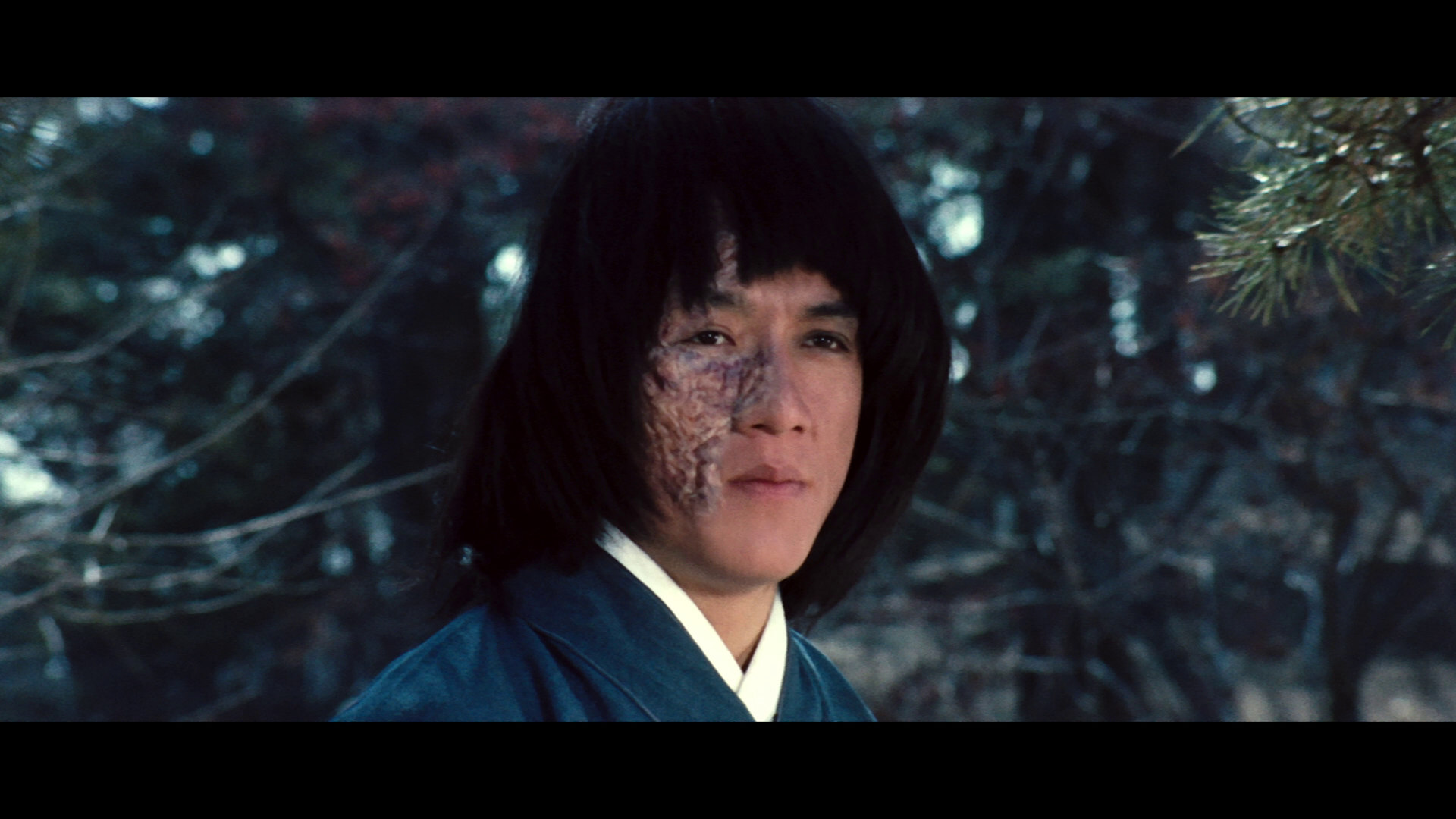 While the color clearly suffers from significant age, visible from the mostly dry primaries, exaggerated reds still bleed out. To Kill with Intrigue’s mastering is suspect all around.

Grain does remain in the image, but the film stock fights against digital tools trying to erase its existence. The resulting imagery appears smeary, worn, and in places, barely discernible. Chan’s first appearance happens somewhat in shadow, and in a long shot, his face looks more like a gray blob. Grain still leftover from the sloppy noise reduction, at best, looks mushy, even poorly resolved by the contrast.

Yellowed highlights diminish peak white, and even worse, will clip detail. Awful black levels fail to reach black, all the while further muddying the image. Add this to lackluster resolution (at best an HD scan, not a fresh 2K/4K effort) and To Kill with Intrigue is visually miserable.

Five audio tracks show up in the menu. Three are listed as mono DTS-HD – Mandarin, English, and a Japanese Mandarin. In true stereo is a Cantonese track, followed by two surround mixes, but only in Dolby Digital and of dubious mixing quality. To further confuse, the Mandarin mono is partly a stereo track – listen to the torches around 20-minutes in as the sound effects clearly exist discreetly in the stereo channels. The same happens during the finale as Chan jumps around the treeline.

There isn’t an obvious winner among them. Each carries dwindling fidelity, from the messy music to scratchy, worn dialog. Balance between the dialog and sound effects can be way off, like the bloated dialog of the Mandarin mono and English dub.

Commentary work comes from critic David West. Critic Ricky Baker speaks on the film for 20-minutes in a satisfying discussion. A slew of trailers and stills bring this one to a close.

To Kill with Intrigue

To Kill with Intrigue mixes campy wire works an a pitifully soapy romance and ends up with little entertainment value.