Train to Busan’s villain are not the infected zombie horde; the virus filtering through their bloodstream bans rational thought. Instead, the Train to Busan presents an issue of class, the same as Snowpiercer a few years prior. The relentless need to protect ones self over others manifests as a rich businessman pushes anyone of lower class into harms way, ensuring his selfish survival.

Seok-woo (Gong Yoo) lives life with the same mindset, but he’s the hero, learning from his caring daughter as this on-board catastrophe continues. Heroes change, villains don’t. Removed from any independent thought, little separates the horde from the rich, one out to feed themselves, the other to protect their status. Nothing can change either side.

Train to Busan laments the wealthy and their inflated self-worth

Pre-COVID, Train to Busan compartmentalized the South Korean government’s response to MERS, although the years following certainly leave a similar mark to the current pandemic. In its opening scene, a farmer laments potentially losing his livestock – again – and worried phone calls consider whether the viral strain is airborne. Those fears feel entirely authentic and real now, at least internationally.

Importantly, Train to Busan only stops when it has to, either to sustain slow burning tension or to force Seok-woo to face his fears over lackluster fathering, and right in front of his daughter. Much as Train to Busan laments the wealthy and their inflated self-worth, it’s also a cognizant film about how and why people become ensnared by success. Soek-woo becomes a representation of Korean work culture, from the dedication to a career and the inability to connect with family.

Repeatedly called a jerk by fellow traveler Sang-hwa (Ma Dong-seok), Seok-woo comes to accept responsibility, choosing to arm up and rescue others, inspired by Sang-hwa’s ferocious protective spirit. Guilt consumes Seok-woo who uses this unreal situation to make amends. This isn’t a message to his young daughter – she already is the person he should be. That dynamic adds nuance to differentiate Train to Busan from zombie cinema’s tiring popularity; it’s less about an apocalypse than doing (and being) righteous, coming to understand life’s value isn’t contained in numbers. 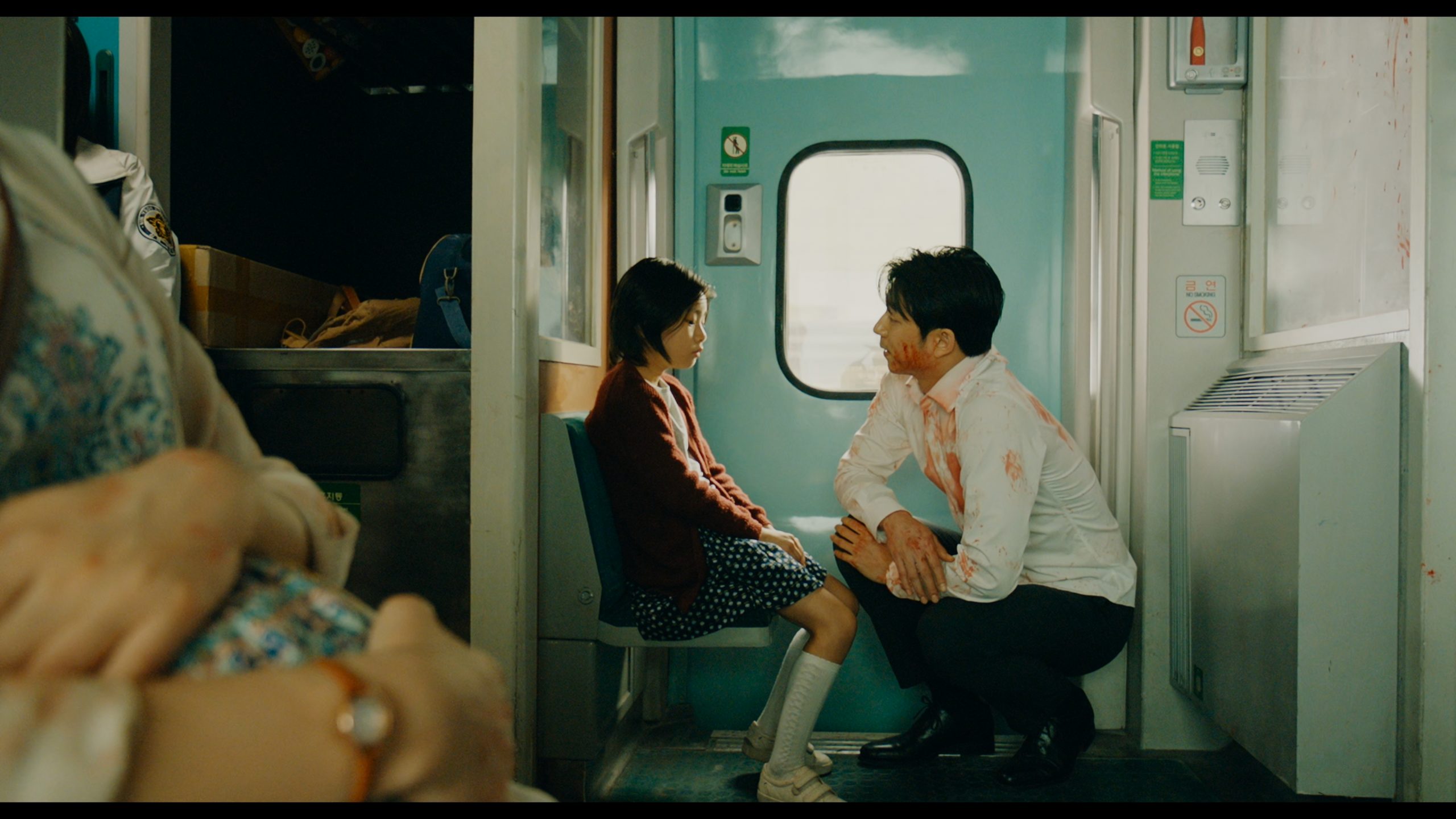 From a 2K finish, there’s plentiful gloss to this disc. Clarity is perfect, not allowing a speck of noise into the frame when Train to Busan hits a peak, and that’s often. Wider shots lack the firmest resolution, appearing notably softer, but texture doesn’t suffer. Purity stays high.

Added to this, a new Dolby Vision pass looks spectacular, blasting the highlights with intense brightness. Contrast never loses its grip. Black levels don’t either, but they do succumb to crush on occasion. The severity of the latter is minimal though.

Formed with two specific palettes, one is warm, one cool. Dominate though is the warmth, and rarely does the cooler aesthetic weaken something like flesh tones. Compared to the Blu-ray, primaries receive additional punch, red blood generous in saturation. Density perks up.

Aggressive and swirling, everything from city streets to train stations take advantage of this Atmos mix (the Blu-ray uses DTS:X). Sound is a constant presence, whether it’s a hum onboard the train or zombies thrashing around. Dialog isn’t lost in the bustle, even as the active overheads keep a steady presence.

In LFE terms, the track continues to impress. The score delivers on a hearty, thick rumble, the whole room shaking as the drama picks up. A solid thump from baseball bats striking skulls accentuates the horror.

The 13-minute making-of includes extensive raw set footage. A short four-minute look at the shoot’s final days is followed by trailers. Note these are on the Blu-ray only.

A relentless zombie movie stuffed with allegories on class, Train to Busan never slows down to breathe.