According to Shaolin Wooden Monk’s writers, audiences already knew the genre’s basics, so they cut the entire first act. Star Jackie Chan is already training to extract his revenge on his father’s killer, walking up steps in lead shoes with water hoisted on his back in the first post-credits scene.

Uniquely playing a mute, Chan relies on his physical acumen in this role, a practice he’d master in the coming years. Still early in his career, Shaolin Wooden Men only shows glimpses of Chan’s future skill set, brawling in a cafe and using benches to escape capture. Otherwise, it’s hand-to-hand almost entirely.

… when Shaolin Wooden Men hits action, it does so intensely

Shaolin Wooden Men is an odd entity, cheap too. The structure makes no sense until flashbacks fill in blanks before the third act, and by then, the twist is clear. It’s a pure martial arts movie, scenes picked and plucked from the competition to create this lackluster hybrid unique only for the rapid introductory chapter.

Storytelling issues aside, when Shaolin Wooden Men hits action, it does so intensely. Money saved on sets (staging happens in low-budget dirt patches) goes into choreography. Even against less-than-stellar cinematography, the flow and impact both look superb at full speed – and rarely does the action slow.

With no words to say, Chan becomes the easy underdog in this tale, written off by monks, ejected from the temple, and disrespected in the streets. He fights for cause even without knowing his actual goal. Yet he’s still worth rooting for, willing to push himself while learning, and using strikes from multiple martial arts forms. What’s missing in the usual fun is countered by enjoyable, inspiring montages, marred only by a limited and repetitious score. 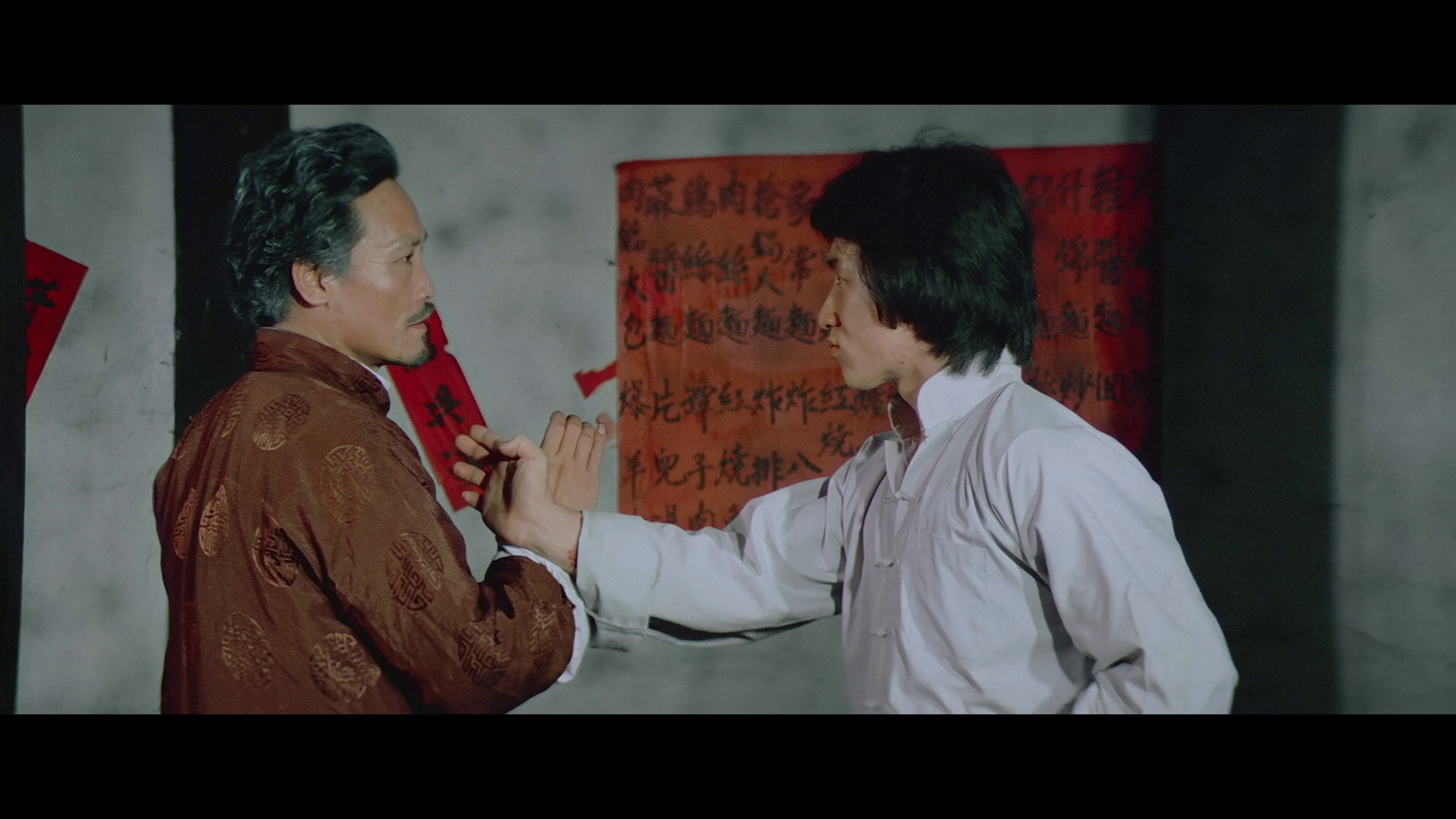 Opening on a pure black stage, the challenging material in Shaolin Wooden Men begins immediately. With black levels not quite black, artifacts tend to fill the screen, usually near the corners. This dark banding isn’t a major issue, just the first notable one. After the debacle that was The Killer Meteors disc, this improves – a little.

Note black levels don’t better themselves at all. Deep gray is the best they’ll achieve. Noisy grain can and will slip those shadows. Filtering is detectable, especially where movement and steam/smoke/dust are concerned. Thankfully, this doesn’t destroy detail, rather demolish the highest frequency information. Texture can slip through, generally natural, but with a digital glossiness. Since the scan itself doesn’t appear to be the highest resolution (possibly an older HD scan), there’s less to lose.

Four (!) DTS-HD mono tracks pop up in the audio menu. One is Mandarin (default), the next an English dub, and two Cantonese tracks, one labeled an alternate but with no explanation. Whatever the choice, it’s tough. Fidelity sounds awful with blown out voices and harsh treble, both necessitating a drop in volume to remain tolerable. Add in fight sounds, and the sound wall becomes a genuine problem. Plus, static and popping remain a regular fixture throughout Shaolin Wooden Men. It’s a bust.

Critic Rick Baker speaks for a little past nine-minutes about Shaolin Wooden Men. Fellow critic James Mudge provides the commentary, followed by a litany of trailers and stills.

Structurally odd, Shaolin Wooden Men struggles to hold interest, but those flashes of Jackie Chan’s later greatness are worth it.