It’s hard remembering today but at one time Mandy Moore (This Is Us) was a pop singing idol before she could drive, a sanitized version of Britney Spears. A Walk To Remember showcases her first starring movie role as Moore began transitioning from musician to actress for her career. Co-starring Shane West, the poignant teen love story turns out far better than it has any right being. The touching film adapts Nicholas Sparks’ bestselling novel about a high school bad boy falling for the minister’s pious daughter.

Also featuring Daryl Hannah and Peter Coyote, the coming-of-age journey for two teenagers in love is shockingly wholesome and sweet-natured for modern Hollywood. Originally intended for PG-13, A Walk To Remember is issued in an unforgettable PG package of emotional drama and tender feeling. While it does tread lightly into Hallmark territory with its sappy story, the tearjerker has a genuine approach thanks to its teenage stars and understated direction.

A Walk To Remember is a great teen romance, simple and charming

Landon Carter (Shane West) moves with a fast crowd at the local high school, a carefree troublemaker in the popular crowd. He’s a notorious person in the small town of Beaufort, North Carolina. Jamie is the quiet daughter of the local reverend, devoted to her faith and her father.

When Landon is sentenced to community service, he gets to know Jamie on a personal level as they appear in a school play together. The rowdy teenager begins falling in love with Jamie, flipping his world upside down. There’s an amazing film scene when you see the precise moment Landon falls madly in love with Jamie.

The film was fashioned as a vehicle for Mandy Moore, tailor-made for her burgeoning talents at the time. The pop star gets a big solo when she sings in the school play. However, music is more an afterthought in the streamlined screenplay. A Walk To Remember is a great teen romance, simple and charmingly devastating.

Some of the film’s success is thanks to Mandy’s screen presence but more credit almost certainly has to go to her talented co-star, Shane West. He’s remarkable in the film, a performance far beyond his young years would indicate. It’s a bit of a shame he didn’t become a bigger star in Hollywood after this success.

A Walk To Remember may ultimately be a teen remake of A Love Story, but it’s a fantastic retelling on a tried-and-true premise which hasn’t aged a day. I can promise you’ll finish the film with misty eyes unless your tear glands are broken. 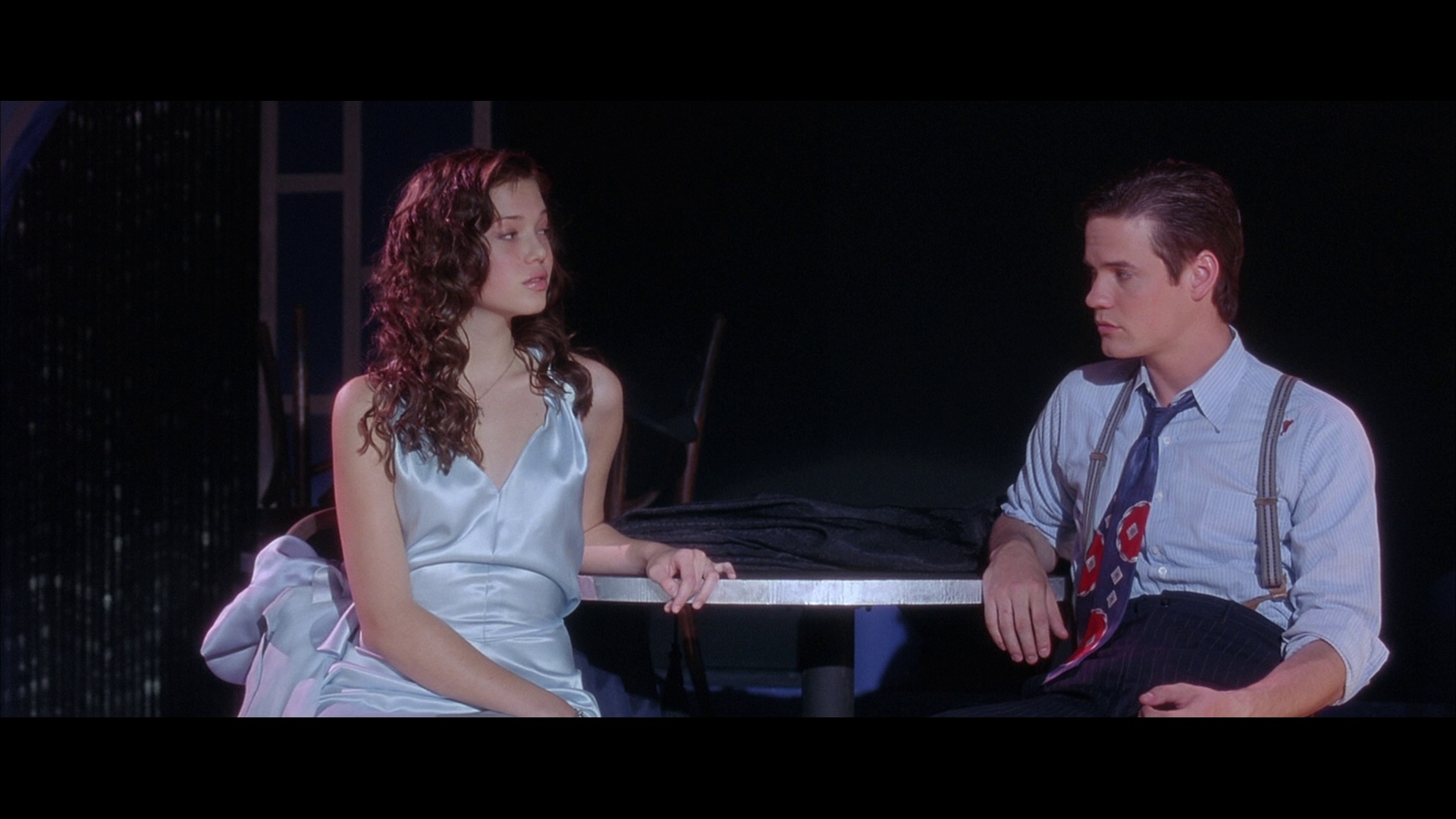 Shout Factory licenses A Walk To Remember from Warner, who have done nothing with the film since releasing it on DVD back in 2002. This is an older transfer from the camera negative, respectable for a somewhat forgotten catalog property. Could be a master struck on a telecine or something a little newer. It lacks the sharpness and definition of a 4K film scan, though in its favor features no ringing or evident filtering. Unassuming cinematography is on the softer side, clean with little atmosphere.

The main feature runs 102 minutes on a BD-50, transparently captured in a high-bitrate AVC encode. The 1080p video shows the film at a 2.35:1 aspect ratio, fairly close to its original 2.39:1 theatrical exhibition. Grain reproduction is adequate, left untouched by the healthy film elements. A round of modern color correction would likely punch up the contrast and saturation levels a bit but exteriors offer pleasing tonality and generally fresh primary colors.

The video quality is far better than DVD with fine HD resolution and enhanced clarity. This isn’t a wow presentation which will blow home theater vets away but provides a definite improvement over what we’ve had for many years.

The dialogue-driven drama offers an uncomplicated surround mix in 5.1 DTS-HD MA audio without much gusto. The sound is clean and clear, primarily prioritizing upfront dialogue with a modest ambient spread adding a little atmosphere. Mandy Moore includes a few original tunes, heard in impeccable fidelity. A handful of pop songs are delivered in rich and lively quality.

I was beginning to worry A Walk To Remember would never see Blu-ray in North America. Thankfully Shout Factory has rescued the touching teen romance from DVD’s limitations. They port over every archival special feature from WB’s original DVD and toss in a new interview with author Nicholas Sparks.

The disc is coded for Region A. Multi-region folks desperate for more bonus features may want to check out the German BD with differing extras.

A Walk To Remember is #142 in Shout Factory’s Select line-up.

A Look Back At ‘A Walk To Remember’ With Author Nicholas Sparks (31:48 in HD) – A substantial new interview in which Sparks details his familial inspiration for the novel and thoughts on the film’s adaptation. He looks back with fondness at the cast and crew. Unfamiliar with the source novel, I wasn’t surprised to learn the book was set in a much earlier time period than the film.

Audio Commentary With Director Adam Shankman and Stars Mandy Moore And Shane West – An essential listen for anyone who considers themselves a fan of this movie. The three share an obvious affection and camaraderie in this easygoing, fun discussion packed with anecdotes and analysis.

Audio Commentary With Nicholas Sparks And Screenwriter Karen Janszen – Another interesting commentary between two professionals who know their stuff, discussing sub-threads left out of the movie from the book and other such topics.

Full disclosure: This Blu-ray was provided by the distributor for review. This has not affected the editorial process. For information on how DoBlu handles all review material, please visit our about us page.

A Walk to Remember