The Woman King joins a potent movement in mainstream cinema, empowering genders or race through overt dialog. The message isn’t wrong so much as the delivery – Woman King speaks past these characters and directly toward the audience, offering no faith in viewers to pick up less subtle context. Imagine believing a moviegoer would be incapable in deciphering a ferocious, potent story about strong women even as they charge toward their foes without a character stating, “You are powerful.” And in those words.

Purposeful as Woman King is, that softening of truth diminishes the value

None of this erases Woman King’s overall brutality, certainly skirting by a PG-13 by the slimmest margins. Viola Davis remains a force on screen, leading her women warriors against the entire slave trade, scattering blood in droves, without any remorse – nor should there be any when confronting slavers.

It’s an impressive, even lavish production. Too long, especially in dealing with romantic entanglements, if making use of the runtime to add scale akin to vintage Hollywood epics. Grand battle scenes erupt thanks to actual combat; Woman King doesn’t extend the clashes with digital effects. It’s all in-camera, including flashy choreography to better sell the violence.

Much as it is a statement piece on feminine recognition, there’s additional play in the political sphere. Dahomey’s king (John Boyega) contends with traders seeking to steal their people in exchange for needed goods, trying to balance need with righteousness. Woman King thus aims for the underdog tale, the small kingdom overwhelmed by the opposing force’s ships, guns, and numbers. Obviously, this further enhances the feminist might, and causing the eye-rolling dialog to worsen (or blatantly stick out). With a hint more honesty, Woman King nears an action classic. But it doesn’t, and that’s a shame. 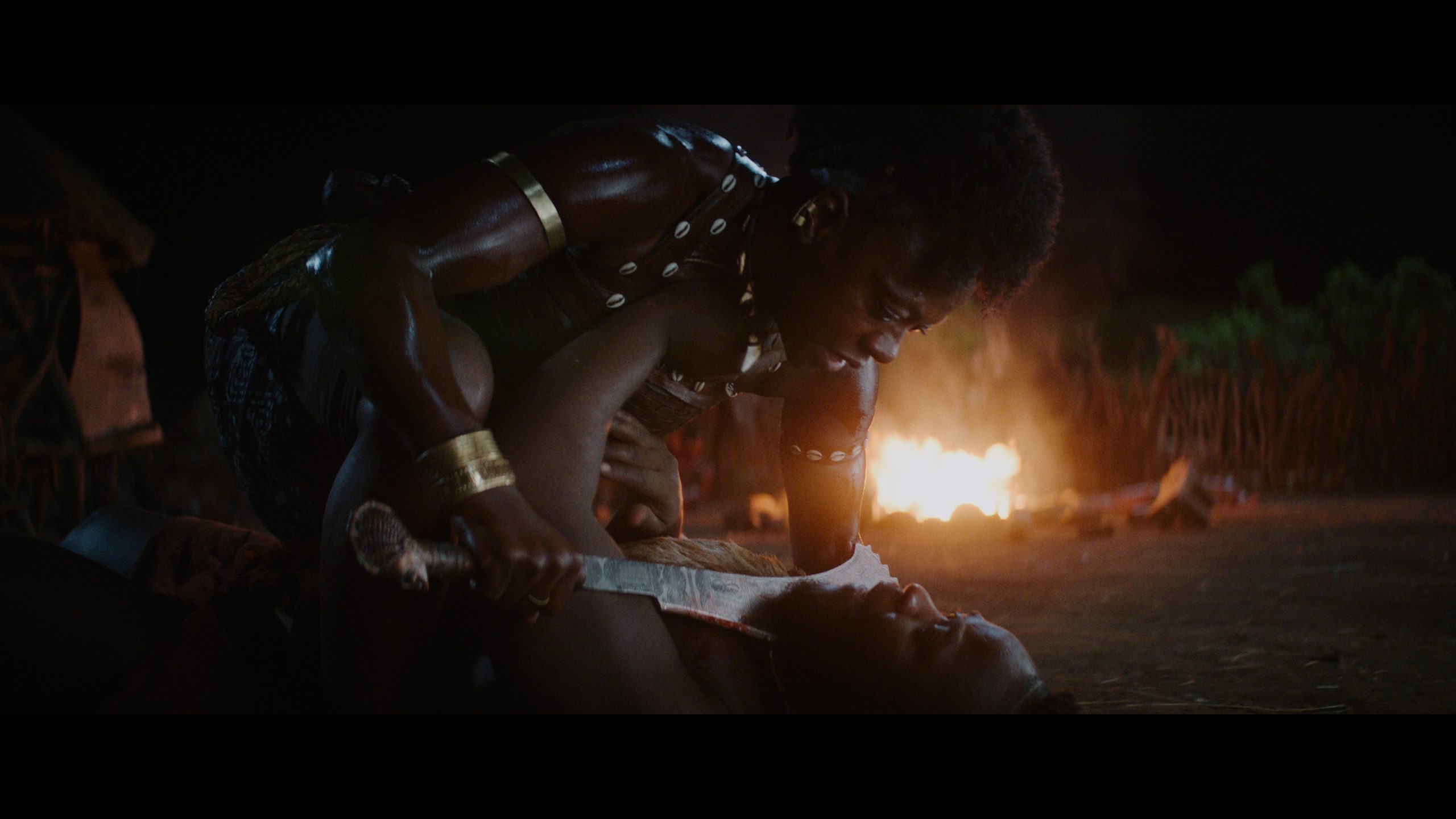 Utilizing Dolby Vision to its fullest, Woman King brings vibrant, even intense brightness to the screen. Peaking in the African sunlight, whether it’s the skyline or reflections from sweaty skin, every surface glistens. Density within the shadows achieves close (if not quite equal) heartiness, enough to sustain hefty dimensionality.

Splendid color comes not only from the location cinematography, but the saturated costumes too. Purples and yellows appear especially bold. Lush greenery surrounds numerous scenes.

A true 4K digital source instills Woman King with resolution galore. Close-ups drive fidelity in droves, from facial definition to the costume’s stitching. Although captured on digital, a grain filter hovers over the movie. If there’s an issue with this disc, the artificial grain becomes the root cause. Encoding doesn’t always keep a steady grip on things, reduced to buzzy noise often. Otherwise, Woman King achieves visual purity.

Thick in range, Atmos mixing keeps the bass crunchy during action scenes. Horses rush onto the screen with appropriate thunder. Massive drums in the score reverb deep into the low-end.

Attentive positional use sustains even the driest dialog via appealing ambiance. There’s always something happening in a rear channel, from background dialog to busy shops creating their wares. Within the action scenes, the spread is enormous, and more importantly accurate. Swords clash in each speaker, while crowds add screaming or yells. Gunshots echo into the sky, making sure to utilize the heights.

Both the UHD and Blu-ray contain the extras. First is a 10-minute look at Viola Davis and her prep for this role. The rest of the cast earns notice over 11-minutes. Another 10-minutes details the creative team, including a focus on Gina Prince-Bythewood. A commentary sits under those featurettes in the menu and includes Prince-Bythewood and editor Terilyn A. Shropshire. Some auditions and a (again) a 10-minute look at why screen representation matters closes this disc.

At times overt and forced, Woman King still makes a potent point in a generally fictional take on this historical story.